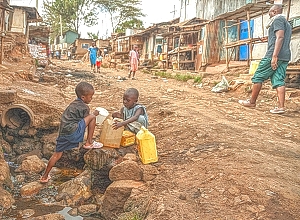 A relationship between drinking street-vended sachet water and an increased risk of contracting cholera is suggested by a study in the Democratic Republic of the Congo, published this month in PLOS Neglected Tropical Diseases. The research is by Placide Mbala-Kingebeni of the National Institute of Biomedical Research and colleagues.

Cholera is a diarrheal disease caused by ingestion of the Vibrio cholerae bacterium. In November 2017, a cholera epidemic occurred in Kinshasa, capital of the Democratic Republic of the Congo, where no outbreak had been recorded for nearly a decade.

Behavioural risk factors for cholera are well-documented in rural and semi-urban areas. However, in densely populated mega-cities in Sub-Saharan Africa, transmission patterns and risk factors are poorly understood, said PLOS in a release published on 8 July 2021.

To investigate cholera transmission patterns in a large urban setting, researchers conducted a matched case control study. They recruited 195 people who had tested positive for cholera in February 2018 and 195 people who matched the demographics of the positive cases, but who tested negative, as controls.

Field staff administered survey questionnaires to identify cholera risk factors. The authors then analysed which risk factors were most reported by positive cholera cases compared to the controls.

The authors found that increased frequency of sachet water consumption was positively associated with increasing risk of cholera.

Although the water inside the sachets was not contaminated and was of higher quality than other common drinking water sources, water sachets are consumed by biting off an edge and sucking the water out of the sachet. Direct and continuous contact between the mouth and sachet transmitted pathogens from the sachet’s contaminated exterior.

The study did have some limitations, for example, not all included cases were laboratory-confirmed, and sample size was small compared to the size of the population at risk. Future studies should address these limitations and expand on the current research to uncover previously unknown modes of cholera transmission.

According to the authors: “The consumption of water from street-vended sachets needs to be considered as a potential route of cholera transmission in urban settings where the use of this drinking water type is frequent.

“Health messaging, outbreak control measures and epidemiological investigations should include the consumption of water sachets as a potential risk factor during future cholera outbreaks in urban low-resource contexts.”

Sachet water consumption as a risk factor for cholera in urban settings: Findings from a case control study in Kinshasa, Democratic Republic of the Congo during the 2017-2018 outbreak

Behavioural risk factors for cholera are well established in rural and semi-urban contexts, but not in densely populated mega-cities in Sub-Saharan Africa. In November 2017, a cholera epidemic occurred in Kinshasa, the Democratic Republic of the Congo, where no outbreak had been recorded for nearly a decade.

During this outbreak, we investigated context-specific risk factors for cholera in an urban setting among a population that is not frequently exposed to cholera.

We recruited 390 participants from three affected health zones of Kinshasa into a 1:1 matched case control study. Cases were identified from cholera treatment centre admission records, while controls were recruited from the vicinity of the cases’ place of residence.

We used standardised case report forms for the collection of socio-demographic and behavioural risk factors. We used augmented backward elimination in a conditional logistic regression model to identify risk factors.

The risk factors funeral attendance and contact with someone suffering from diarrhoea showed a p-value of 0.09 and 0.08, respectively. No socio-demographic characteristics were associated with the risk of cholera.

Drinking water consumption from sachets, which are sold informally on the streets in most Sub-Saharan African cities, are an overlooked route of infection in urban cholera outbreaks.

Outbreak response measures need to acknowledge context-specific risk factors to remain a valuable tool in the efforts to achieve national and regional targets to reduce the burden of cholera in Sub-Saharan Africa.

PLOS article – Sachet water consumption as a risk factor for cholera in urban settings: Findings from a case control study in Kinshasa, Democratic Republic of the Congo during the 2017–2018 outbreak (Open access)

Hospital reports a jump in cholera cases in Kenyan capital

Another cholera outbreak in Zimbabwe