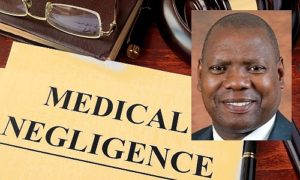 The SIU found 14 cases where there was no evidence that the claimants had presented themselves at medical institutions at any time.

The SIU report highlights claims against various unnamed private advocates and attorneys in the Eastern Cape and Gauteng. One advocate, a member of the Johannesburg Society of Advocates (JSA), who the report confirms “withdrew as a candidate to be a judge”, allegedly secured duplicate payments and made charges totalling R2.4m which could not be justified.

The SIU reports that this matter was referred to the NPA for a decision on a criminal prosecution, as well as to the Legal Practice Council and to the JSA council.

The Daily Dispatch reported in April that Gauteng-based Advocate Nceba Dukada SC had withdrawn his candidacy for a position as a judge on the Bench of the Eastern Cape High Court (Mthatha) after a complaint over fees was lodged with the JSA. Two other Eastern Cape advocates face similar charges of double briefing, fraud, over-reaching and over-charging, in separate claims involving at least R1.4m.

A fourth advocate stands accused of over-charging and colluding with State Attorney officials to defraud the department of R2m. Another advocate faces similar charges of fraud and corruption involving an amount of R1.2m. A R331,000 fraud case involves Sithembele Tshitshi, former head of the Mthatha State Attorney’s Office and another Mthatha lawyer, Xolani Polo. The SIU has registered 10 criminal cases of fraud in the province, with a total value of R154m. These include six cases involving Mthatha attorney Zuko Nonxuba, who has already appeared in court in connection with some charges.

Daily Dispatch reports that following proclamations signed by President Cyril Ramaphosa, the SIU was brought in to assist the department in investigating allegations of fraud in some claims of negligence lodged by patients against state healthcare facilities. The unit reflects 98 “interventions made”, representing a total value of R2.2bn, though the report does not detail the interventions. It reveals that only one criminal investigation, associated with a value of R2m, is close to being finalised.

But the SIU report, according to Premier Oscar Mabuyane,  supports the contention of Mabuyane and his predecessor, Phumulo Masualle, that some claims brought against health officials over the years are invalid. Details of the report were released by provincial government spokesperson Mvusiwekhaya Sicwetsha on Friday, who said the SIU involvement “was to determine if claims were legitimate or should be challenged”.

Meanwhile, the Health Department is proposing a fund that will deal with the medical claims ballooning in all nine provinces. This, notes a Sunday Tribune report, was revealed by Health Minister Zweli Mkhize when he briefed the National Assembly’s Health Committee last week. The matter was brought up by FF Plus leader Philip van Staden when he asked what the department was doing to eradicate the problem of medical claims in the Eastern Cape.

The National Treasury revealed in the Budget this year that medical claims rose from R97bn in the 2018/19 financial year to R111bn in the 2019/20 period. Mkhize told MPs the issue of medical claims was a problem not only in the Eastern Cape but in the entire country.

Noting government was “working out a mechanism on how to deal with litigation in general”, Mkhize said a fund similar to the newly-formed No Fault Compensation Fund for COVID-19 vaccinations would be set up to take care of the medical claims. “We can budget for it and cap it at a particular level. Right now medical legal costs are a runaway horse that no one can control,” he said.

There was a lot of exploitation of government resources, which has to stop at a certain point, the Minister said. “The only way we can do it is to actually create a framework which allows us to curb the cost and expenditure and make sure there is an easier way for people to get protection in cases of mismanagement, negligence or any kind of problems. If they suffer any harm, they can go through that process without having to face exorbitant charges by lawyers and a lot of extortion that we see happening to this fund,” he said.

Questions over Eastern Cape strategy on R29bn in negligence claims

Litigation brings Eastern Cape Health to the brink of collapse