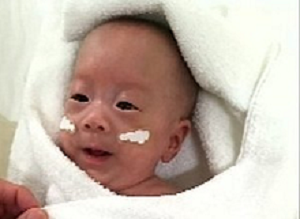 A baby boy, thought to be the smallest ever to survive, weighing 268g at birth, has finally been sent home from hospital. According to a report in The Daily Telegraph the baby boy from Japan weighed just 268g when he was born 16 weeks early last August. The baby, who weighed only slightly more than a pack of butter at birth, spent five months in the neonatal care unit at Keio University Hospital in Tokyo and was finally sent home last week, two months after his due date.

The report says doctors performed an emergency caesarean section at 24 weeks when he failed to grow during the pregnancy and experts feared his life was in danger. The bonsai baby, whose name has not been released by hospital authorities, now weighs 3.2kg – more than 12 times his original birth weight.

The report says the boy was so tiny at birth he could fit into a pair of cupped hands and his skin was so thin that his ribcage was clearly visible. He was treated at a neonatal intensive care unit where doctors managed his breathing and nutrition and he was eventually able to breastfeed. “I can only say I’m happy that he has grown this big because honestly, I wasn’t sure he could survive,” the boy’s mother is quoted in the report as saying.

Babies who weigh less than 1,500g at birth face a range of health problems including higher risk of infection, trouble breathing because their lungs are so undeveloped, neurological problems such as bleeding on the brain and gastrointestinal problems.

The report says according to a database of the world’s tiniest babies – all those weighing less than 400g – held by the University of Iowa the previous record for the smallest boy was a German baby born in 2009, dubbed Tom Thumb by his doctors. He weighed 275g after being born 15 weeks premature. He spent nine months in hospital before being allowed home.

The report says the smallest ever baby was a girl born in Germany in 2015 who weighed just 252g. Girls are more likely to survive pre-maturity than boys although doctors are still unsure why this is – it may be down to having more mature lungs.

While the little boy may seem to have made it through against the odds, around 50% to 60% of babies born at 24 weeks survive, the report quotes Helen Mactier, consultant neonatologist in Glasgow as saying. “Survival is dictated by a number of factors but probably the most important is gestational age. But survival is also dictated by the health of the mother and the complications of pregnancy,” she said.

More recognition, accolades for Abdool Karims, with award from Japan