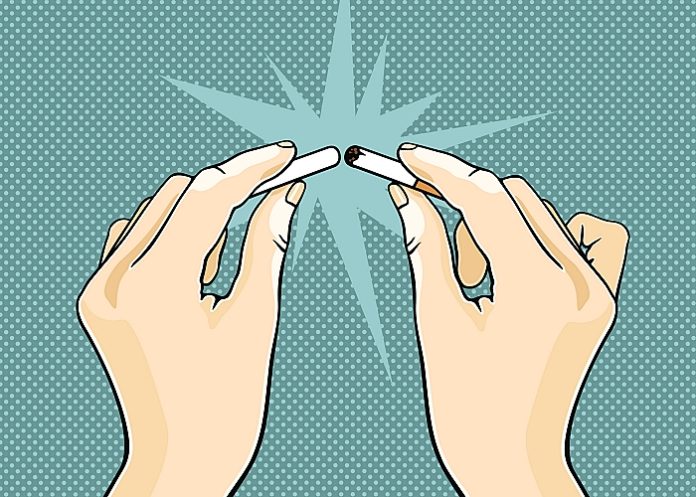 Smokers who kick the habit before age 45 can nearly eliminate their excess risk of dying from lung or other cancers, estimates a new study from the American Cancer Society and University of Oxford, writes Amy Norton of HealthDay News.

The HealthDay News article was published in US News & World Report on 25 October 2021, reporting on a study published on 21 October in the journal JAMA Oncology.

It is well established that after smokers quit, their risk of tobacco-related cancers drops substantially over time.

Researchers said the new findings underscore the power of quitting as early as possible.

Among more than 400,000 Americans they followed, smokers died of cancer at three times the rate of non-smokers. However, smokers who managed to quit by age 45 lowered that excess risk by 87%.

And if they overcame the habit by age 35, their excess risk of cancer death was erased, said Blake Thomson, a researcher at the American Cancer Society who led the study, reports HealthDay News in US News & World Report.

He stressed that it's never too late to quit. Smokers who quit in their 50s to early 60s also substantially lowered their excess risk of cancer death.

But the findings do underscore the power of kicking the habit as early as possible.

"If you're a smoker in your 30s, hopefully these findings will speak to you," Thomson said.

The research looked at data on more than 410,000 Americans who entered an ongoing federal health survey between 1997 and 2014.

Around 10,000 participants died of cancer during the study period. And on average, smokers were three times more likely to die of cancer – most often lung cancer – compared with people who had never smoked.

Much, however, depended on age – the age at which smokers both started and quit – the HealthDay News story continues.

“The take-home message is that it is never too early and never too late to quit," said Dr David Tom Cooke, a volunteer spokesperson for the American Lung Association and professor of general thoracic surgery at the University of California, Davis Health.

He said doctors should help patients kick the habit as early as possible, but also "never give up" trying to quit. In general, he said, smokers fare better when they get some help in the effort, whether from their doctor or through ‘quitlines’.

“I would encourage any current or former smoker to talk to their primary care provider and find out if they are eligible for lung cancer screening,” Cooke said.

Association of Smoking Initiation and Cessation Across the Life Course and Cancer Mortality: Prospective Study of 410 000 US Adults

Smoking remains the leading cause of cancer mortality in the US. Prior research has shown that smokers who start younger have greater mortality risk than those who start later, and quitting (especially at younger ages) substantially reduces that risk. However, the relevance of age at smoking initiation and cessation to cancer mortality in contemporary populations, particularly across the life course, is not well established.

In this prospective cohort study, we investigated the association between age at smoking initiation and cessation and cancer mortality (C00-C97 in the International Classification of Diseases, 10th Revision) at ages 25 to 79 years using data from the US National Health Interview Survey for 1997 to 2014 linked to the National Death Index, with follow-up through December 31, 2015.

To account for differences between smoking groups (shown in eTable in the Supplement), analyses adjusted for age at risk (11 groups), sex, race and ethnicity (5 groups), education (4 groups), region (4 groups), and alcohol consumption (5 groups).

Race and ethnicity were self-reported and grouped into 5 categories to account for previously reported differences in smoking habits and mortality risk by race and ethnicity. Race and ethnicity are collected in the National Health Interview Survey to report the health status of the nation according to major demographic factors.

The study was based on deidentified publicly available data, which is considered nonhuman participants research under the US Department of Health and Human Services’ Office for Human Research Protection (the Common Rule) and does not require institutional review board review or informed consent. Analyses were performed using Stata, version 15.1 (StataCorp LLC) and R, version 4.0.5 (R Project for Statistical Computing).

In this contemporary US population, current smoking was associated with three times the cancer mortality rate of never smoking. Although delayed smoking initiation was associated with substantial reductions in cancer mortality risk, those who began smoking at ages 21 years and older nevertheless had more than twice the risk compared with never smokers.

Quitting, even at older ages, was associated with a substantial reversal of these risks.

In December 2019, the federal legal age to purchase tobacco was raised from 18 to 21 years. Given that most cancer deaths among smokers were attributable to smoking, even among those who started smoking at ages 21 years and older, the effect of such legislation on US cancer mortality will depend on the extent to which it both delays smoking initiation and prevents initiation entirely.

These findings underscore that starting to smoke at any age is extremely hazardous, but smokers who quit – especially at younger ages – can avoid most of the cancer mortality risk associated with continued smoking.

Research Letter in JAMA Oncology – Association of Smoking Initiation and Cessation Across the Life Course and Cancer Mortality: Prospective Study of 410 000 US Adults (Open access)