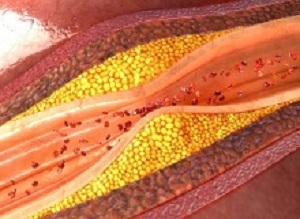 Heart attacks are usually caused by inflamed plaques in the coronary artery causing an abrupt blockage of blood getting to the heart. The challenge for doctors is knowing which plaques are most likely to cause blockages, and therefore which patients should be treated with more aggressive therapies.

The team at the University of Oxford has shown that the most dangerous plaques release chemical messengers which modify the surrounding fat. They have developed a technology that detects the inflamed plaques that are prone to cause heart attacks by analysing CT images of the fat surrounding the arteries.

Their new biomarker, called the Fat Attenuation Index (FAI), has been tested for the first time in a large study and was presented at the European Society of Cardiology Congress in Munich.

The study, supported by the British Heart Foundation and the NIHR Oxford Biomedical Research Centre, involved 3,900 patients from Europe (Erlangen, Germany) and the US (Cleveland Clinic), who were followed up for ten years after they had a CT coronary angiogram. The FAI technology was found to predict fatal heart attacks many years before they happen, with a significantly superior predictive accuracy compared with other methods. People with abnormal FAI had up to nine times higher risk of having a fatal heart attack in the next five years. Importantly, these patients would be the ideal candidates for aggressive medical therapy to prevent this from happening.

Every year, over 100,000 people die from a heart attack or related stroke in the UK alone, and heart disease and stroke remain the two biggest overall causes of death worldwide. Yet there is no method that allows for early detection of a potentially fatal build-up of plaque that could trigger a heart attack. With this new technology, clinicians would be able to identify those at risk of having a fatal heart attack in the next few years and take preventative steps before it strikes.

Professor Charalambos Antoniades, who led the study at the University of Oxford’s division of cardiovascular medicine, said: “This new technology may prove transformative for primary and secondary prevention. For the first time we have a set of biomarkers, derived from a routine test that is already used in everyday clinical practice, that measures what we call the ‘residual cardiovascular risk’, currently missed by all risk scores and non-invasive tests.

“Knowing who is at increased risk for a heart attack could allow us to intervene early enough to prevent it. I expect these biomarkers to become an essential part of standard CT coronary angiography reporting in the coming years.”

Professor Stephan Achenbach, from the University of Erlangen, said: “This study highlights an entirely new way in which patients at risk for myocardial infarction or heart attack could possibly be identified very early on. We very much need such novel approaches since a large part of all heart attacks occur without any prior notice. This study and its results may add to our armamentarium to prevent heart attacks, which makes the results so exciting from a scientific and clinical point of view.”

Professor Milind Desai, from Cleveland Clinic, said: “This is an exciting new technology which has the potential for providing a simple, non-invasive answer to detect patients at risk for future fatal heart attacks. More importantly, it highlights the incredible value of cross-continent collaboration to validate the findings in different populations.”

Professor Metin Avkiran, associate medical director at the British Heart Foundation, which funded the research, said: “Most heart scans are good at spotting blockages caused by large plaques, but not the smaller, high-risk plaques that are likely to rupture and cause a heart attack. This new technique could be a game changer – allowing doctors to spot those ‘ticking time bomb’ patients who are most at risk of a heart attack, and getting them on to intensive treatment. This would undoubtedly save lives.

“By using this non-invasive scan, we could prevent a lurking heart attack that might occur down the road. But it also potentially gives us a real-time window into tracking the effect of drugs on inflamed arteries, helping us to identify new life-saving therapies.”

The University of Oxford has formed a spinout company which has an exclusive licence to develop the FAI as a Software-as-a-Service offering, and which will be the vehicle that brings it to the healthcare sector to positively influence patient care. More details will follow shortly.