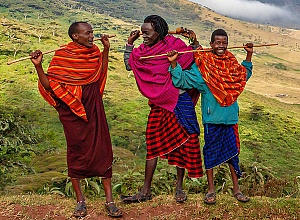 Increased activity of the immune system of urban Tanzanians— which may increase the risk of lifestyle diseases — may be due to dietary differences to their rural counterparts, found a study in Nature Immunology.

Urban Tanzanians have a more activated immune system compared to their rural counterparts. The difference in diet appears to explain this difference: in the cities, people eat a more western style diet, while in rural areas a traditional diet is more common. The researchers were from Radboud University Medical Centre (Netherlands), the LIMES Institute at the University of Bonn, the German Centre for Neurodegenerative Diseases (DZNE) and the Kilimanjaro Clinic Research Centre in Tanzania.

The survey was conducted among more than 300 Tanzanians, some of whom live in the city of Moshi and some in the countryside. The team found that immune cells from participants from Moshi produced more inflammatory proteins. The people surveyed had no health problems and were not ill, but an activated immune system may increase the risk for lifestyle diseases, such as cardiovascular disease.

The researchers used new techniques to investigate the function of the immune system and the factors that influence its activity. They looked at active RNA molecules in the blood – known as the transcriptome – and the composition of metabolic products in the blood.

These analyses showed that metabolites derived from food had an effect on the immune system. Participants from rural areas had higher levels of flavonoids and other anti-inflammatory substances in their blood. The traditional rural Tanzanian diet, which is rich in whole grains, fibre, fruits and vegetables, contains high amounts of these substances.

“In people with an urban diet, which contains more saturated fats and processed foods, increased levels of metabolites that are involved in cholesterol metabolism were found,” says Professor Mihai Netea, a researcher at the LIMES Institute and the ImmunoSensation Cluster of Excellence at the University of Bonn and the Radboud University Medical Centre in the Netherlands. He and his colleagues also found a seasonal change in the activity of the immune system. In the dry season, which is the time of harvest in the study area, the urban people had a less activated immune system.

It has been known for some time that a Western lifestyle and eating habits lead to chronic diseases. Professor Joachim Schultze from the DZNE and the LIMES Institute stresses: “We showed that a traditional Tanzanian diet has a beneficial effect on inflammation and the functioning of the immune system. This is important because rapid urbanisation is ongoing, not only in Tanzania, but also in other parts of Africa.” The migration from the countryside to the city is leading to dietary changes and is accompanied by a rapid increase in the number of lifestyle diseases, which puts a heavy burden on the local healthcare systems. The researchers emphasise that prevention is essential, and diet can be very important for this.

Additionally, these findings from Africa are also relevant for Western countries. Urbanization took place a long time ago in most western countries. By studying populations at different stages of urbanisation, researchers therefore have unique opportunities to improve their understanding of how diet and lifestyle affect the human immune system.

The study was funded by the EU Framework Programme “Horizon 2020” through the Joint Programming Initiative "A healthy diet for a healthy life" (JPI-HDHL), the Dutch granter ZonMw, the German Research Foundation and Radboud University. The research is part of the TransMic study, an international project on the ‘Westernisation' of diet and its health consequences. In this project, the researchers from Radboud University Medical Centre and the LIMES Institute at the University of Bonn are working together with colleagues from universities in Italy, Tanzania and Burkina Faso to study the effects of diet on the immune system in populations at different stages of demographic transition and urbanisation.

Study details
Urban living in healthy Tanzanians is associated with an inflammatory status driven by dietary and metabolic changes.

Published in Nature Immunology on 11 February 2021

Abstract
Sub-Saharan Africa currently experiences an unprecedented wave of urbanization, which has important consequences for health and disease patterns. This study aimed to investigate and integrate the immune and metabolic consequences of rural or urban lifestyles and the role of nutritional changes associated with urban living. In a cohort of 323 healthy Tanzanians, urban as compared to rural living was associated with a pro-inflammatory immune phenotype, both at the transcript and protein levels. We identified different food-derived and endogenous circulating metabolites accounting for these differences. Serum from urban dwellers induced reprogramming of innate immune cells with higher tumor necrosis factor production upon microbial re-stimulation in an in vitro model of trained immunity. These data demonstrate important shifts toward an inflammatory phenotype associated with an urban lifestyle and provide new insights into the underlying dietary and metabolic factors, which may affect disease epidemiology in sub-Sahara African countries.

[link url="https://www.medicalbrief.co.za/archives/high-fat-diet-with-antibiotic-use-linked-to-gut-inflammation/"]High-fat diet with antibiotic use linked to gut inflammation[/link]