Toddler’s nosebleeds and coughs caused by leech in throat 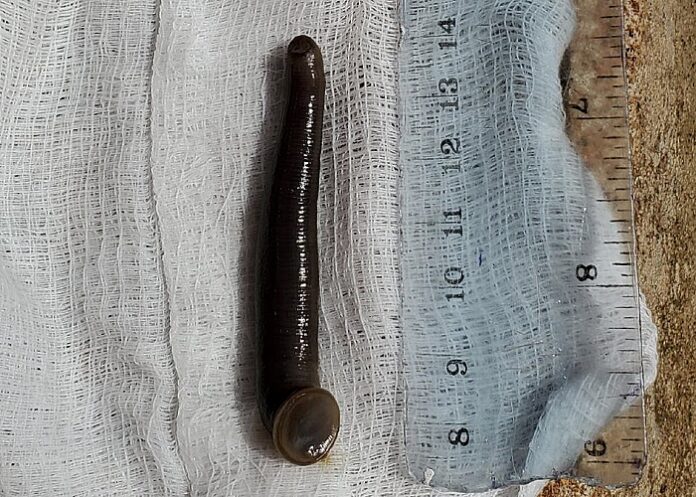 A three-year-old child who presented at a Kenyan hospital suffering from nosebleeds and a cough for several months, was found to have 7.5cm leech in her throat, reports The Independent.

Doctors believe it had been living in her system and feeding off her for months.

After a particularly severe coughing spasm, the mother peered down her throat and apparently spotted the leech.

The leech had to be removed from the child’s upper oesophagus via endoscopy, because it was attached, but the youngster was released from hospital after four or five days and is expected to make a full recovery.

Dr Jason Brotherton, who attended to the child after she was admitted to hospital, said the leech had probably entered the youngster’s throat through drinking contaminated water.

He said it would have been much smaller when ingested but ended up growing to  well over than 7cm after “feeding” off the child for several months.

Brotherton, who has worked in Kenya for about six years, told The Independent: “The child had started with epistaxis (nosebleeds) that progressed to three months of coughing.

“Medical staff had checked her haemoglobin levels, which were very low and then the child started coughing again so severely the mother decided to look in her mouth, which is when she saw the leech in the back of her throat.

“Nose bleeding is quite a common way these patients present as the leeches stay in the upper airway. If they go down into the stomach acid, it kills them.

The doctor wrote in a post: “Before today, I felt pretty confident that I had encountered most causes of anemia until this was pulled from the upper esophagus of a 3 year old. They've been feeding it for a while. Hb was 3 g/dL.”

“I imagine the leech was ingested several months ago. The patient started with epistaxis that progressed to 3 months of cough.

“They finally coughed so hard that mom saw something in the back of the throat. Had to be removed via endoscopy because it was attached.”

In a follow up the following day, Dr Brotherton said the youngster was recovering well and was expected to be discharged.

In a similar case last year, a live leech was reportedly pulled from a five-year-old boy’s throat in China after he suffered breathing difficulties and a sore throat for a year.

It is believed the leech may have got inside the youngster’s body after he drank contaminated water.

How the sushi boom is fuelling tapeworm infections

Paxlovid as a treatment for long COVID