Indian doctors hurl abuse at each other in operating theatre 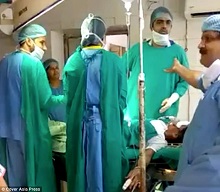 Two doctors have been caught on video hurling abuse at each other inside an Indian operating theatre as they conducted an emergency C-section which resulted in a baby's death, says a Daily Mail report.

A one-minute 22-second video has caught Dr Ashok Nainiwal, an obstetrician, and Dr Murari Lal Tak, an anaesthetist, volleying abuse at each other while operating on an unconscious woman in India. Around a dozen medical staff are forced to stand around while the two men argued in the Umaid Hospital in Jodhpur.

Superintendent of Umaid Hospital, Dr Ranjana Desai, said the woman was brought into the hospital in a critical condition and was immediately shifted to the operating theatre. She lost her baby soon afterwards due to severe birth asphyxia.

Responding to the video, Desai said: “Whatever has happened was unprofessional, unethical and is unacceptable. We cannot yet confirm if the newborn's death was because of the argument. And before taking any action we need to know all the details of the case. We have formed an enquiry committee who will be looking into the case further. They have taken statements of the hospital staff present in the operating theatre at that time. And currently we have suspended one of the doctors and the other one has been transferred. We need to establish what exactly happened and the reason for the situation.”