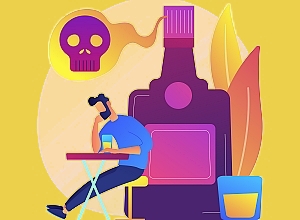 Alcohol consumption appeared linked to more than 740,000 new cancer diagnoses in 2020 – equivalent to 4% of cases worldwide – according to a World Health Organization study conducted by an international team of researchers and published in The Lancet Oncology, writes Mark Leiser for Healio.

Heavy alcohol consumption contributed to a high number of cancer cases. However, moderate drinking – defined as up to two alcoholic drinks per day – contributed to more than 103,000 cancer cases last year, or nearly one in seven alcohol-associated malignancies.

“We urgently need to raise awareness about the link between alcohol consumption and cancer risk among policy-makers and the general public,” said Harriet Rumgay, a doctoral student in cancer surveillance with WHO's International Agency for Research on Cancer in Lyon, France.

“Tax and pricing policies that have led to decreased alcohol intake in Europe, including increased excise taxes and minimum unit pricing, could also be implemented in other world regions,” Rumgay added. “Local context is essential for successful policy around alcohol consumption and will be key to reducing cancer cases linked to drinking.”

Other researchers are from the Centre for Addiction and Mental Health in Toronto, Canada; the Centre for Research and Information on Substance Abuse in Uyo, Nigeria; the American Cancer Society in Atlanta; and the Netherlands Comprehensive Cancer Organisation in Utrecht.

Prior research has established links between alcohol use and development of multiple cancers, according to the Healiostory published on 14 July 2021.

Rumgay and colleagues conducted a population-based modelling study to provide global, regional and national estimates of the alcohol-attributable cancer burden in 2020 in hopes of informing alcohol policy and cancer control in various settings.

They used data on alcohol exposure from nearly all countries – both surveys and sales figure – as well as the most recent relative risk estimates for cancer based on alcohol consumption levels.

Rumgay and colleagues determined that 741,300 new cancer cases – 4.1% of all newly diagnosed patients worldwide – were attributable to alcohol consumption. Men accounted for more than three-quarters of all alcohol-attributable cancer cases.

Mark Leiser continues in Healio that the results demonstrate the need for interventions and effective policy to raise awareness about alcohol consumption’s effect on cancer risk, researchers concluded.

“Yet the impact on cancers is often unknown or overlooked, highlighting the need for implementation of effective policy and interventions to increase public awareness of the link between alcohol use and cancer risk, and decrease overall alcohol consumption to prevent the burden of alcohol-attributable cancers.”

Limitations of the data used in the analysis must be acknowledged, Amy C Justice, professor of medicine and professor of public health policy at Yale School of Medicine, wrote in an accompanying comment.

Approximately one-quarter of global alcohol consumption occurs outside government-controlled channels and, therefore, is not included in sales data, Justice wrote. Self-report also can underestimate alcohol use among heavy drinkers and those with health conditions that are exacerbated by alcohol use, she added. Also, neither commercial sales nor current self-report reflect past alcohol consumption, which might be as influential as current use.

Direct alcohol biomarkers are available. These include phosphatidylethanol, an abnormal phospholipid formed in the presence of ethanol. While phosphatidylethanol is detectable only within 28 days of exposure, it could provide a useful measure of alcohol exposure and enable more accurate estimation of health risks.

See link to the full Healio article below.

Global burden of cancer in 2020 attributable to alcohol consumption: a population-based study

Author affiliations: International Agency for Research on Cancer in Lyon, France; Centre for Addiction and Mental Health in Toronto, Canada; Centre for Research and Information on Substance Abuse in Uyo, Nigeria; the American Cancer Society in Atlanta, United States; and the Netherlands Comprehensive Cancer Organisation in Utrecht.

Alcohol use is causally linked to multiple cancers. We present global, regional and national estimates of alcohol-attributable cancer burden in 2020 to inform alcohol policy and cancer control across different settings globally.

Our findings highlight the need for effective policy and interventions to increase awareness of cancer risks associated with alcohol use and decrease overall alcohol consumption to prevent the burden of alcohol-attributable cancers.

Light to moderate alcohol may reduce risks of cancer, CVD and mortality

Alcohol consumption associated with nearly 5% of US cancer cases

Link between alcohol and 7 cancers is 'strongly causal'