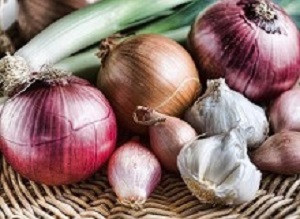 Consumption of allium vegetables – which include garlic, leeks, and onions – was linked with a substantially reduced risk of in colorectal cancer in a study of men and women in China.

In the study, 833 patients of colorectal cancer were matched to 833 healthy controls by age, sex and residence area. Demographic and dietary information were collected via face-to-face interviews using a validated food frequency questionnaire.

The odds of having colorectal cancer was 79% lower in adults who consumed high amounts of allium vegetable compared with those who consumed low amounts.

"It is worth noting that in our research, there seems to be a trend: the greater the amount of allium vegetables, the better the protection," said senior author Dr Zhi Li, of the First Hospital of China Medical University. "In general, the present findings shed light on the primary prevention of colorectal cancer through lifestyle intervention, which deserves further in-depth explorations."

Abstract
Aim: The present study aimed to investigate and identify the association between the intake of allium vegetables and colorectal cancer (CRC) in population.
Methods: A hospital‐based matched case‐control study was conducted between June 2009 and November 2011 in three hospitals. Eight hundred thirty three consecutively recruited cases of CRC were frequency matched to 833 controls by age (within 2.5 years of difference), sex, and residence area (rural/urban). Demographic and dietary information were collected via face‐to‐face interviews using a validated food frequency questionnaire. Adjusted odds ratios (aORs) and 95% confidence intervals (CIs) were estimated by using unconditional logistic regression.
Results: A decreased CRC risk was observed for the consumption of total (aORs of high total allium intake compared with low total allium intake = 0.21, 95% CI = 0.14–0.30, P trend <0.001) and several individual allium vegetables including garlic, garlic stalks, leek, onion, and spring onion (P trend <0.05). By further sex‐stratified analysis, allium vegetable intake was demonstrated to be inversely associated with the risk of CRC in both men and women. However, the association of garlic intake with cancer risk was not significant among those with distal colon cancer (aOR = 0.53, 95% CI = 0.27–1.05, P trend = 0.248).
Conclusion: In this analysis in a Northeast Chinese population, both men and women that the consumption of allium vegetables is associated with a reduced risk of CRC, regardless of colonic tumor subsite, with the exception of garlic intake in distal colon cancer.