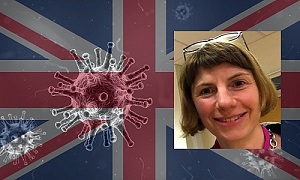 COVID-19 is not a single-specialty disease. Everyone has to collaborate, parceling out work where resources are most needed and finding the best way to handle individual cases, writes Chris Bateman for MedicalBrief. The warning came from Dr Nicky Longley, a one-time University of Cape Town-based infectious diseases Fellow, currently working in a London hospital that is emerging from a bruising encounter with a flood of coronavirus patients in the city that saw most of the UK’s infections and deaths.

Dr Longley was addressing a webinar attended by 1,500 South African clinicians and healthcare workers eager to glean knowledge and insights from her in advance of their own surge in hospital admissions that will inevitably accompany local lock-down relaxations and/or lifting. She said clinicians and hospital staff facing the first flood of Covid-19 patients often felt helpless, scared and overwhelmed, reminiscent of the beginning of the HIV/AIDS epidemic.

The webinar was part of a series hosted by Discovery Health in conjunction with MedicalBrief, the Desmond Tutu HIV Foundation, the SA Medical Association, the SA Private Practitioners Forum and the Unity Forum for Family Practitioners. Details of further webinars will be announced. All are free of charge and registered for CPD points.

It was facilitated by Professor Linda-Gail Bekker, deputy director of the Desmond Tutu HIV Centre at the Institute of Infectious Diseases and Molecular Medicine at UCT. Dr Longley is an associate professor at the London School of Hygiene and Tropical Medicine and a consultant at the Hospital of Tropical Diseases. She worked for several years in infectious diseases in South Africa.

She said South Africa had the advantage of foresight in having witnessed the pandemic sweep through countries like Italy and the UK and thus had the unique advantage of time to prepare and mobilise.

“Nobody (no hospital) has enough isolation facilities or side-rooms to cope with this,” said Dr Longley, emphasising how pivotal the risk stratification of patients was. “You have to see who is most vulnerable in the population and work out how to shield them when they come into hospital,” she added.

Case definition swabs were vital but diagnoses not always as rapid as clinicians wanted. At the hospital entrance, patients were divided into those at high risk of transmitting the virus (put into the ‘dirty’ area), those unlikely to have COVID-19, but with underlying conditions which put them at a high risk of a poor outcome if they contracted it (e.g. the elderly, pregnant, or with malignancies) – put into a clean area, and then difficult cases that defied easy definition.

Dr Longley stressed the importance of a ‘buddy system’ when healthcare workers entered or exited ‘dirty’ areas such as ICU’s and high-dependency units.

“Somebody else watches you put on and take off personal protective equipment each time, because you’re stressed and tired and may also forget hand hygiene between each step when you take scrubs off and when you go home. Also, have a shower before you go home and leave your dirty crocks or shoes behind,’ she advised.

With 233,151 COVID-19 cases and 33,600 deaths in the UK at the time she spoke, Dr Longley said things were finally slowing down after a dramatically-effective but limited lockdown that allowed exercise, movement and shopping, with social distancing, hand hygiene and masks strongly encouraged. Her hospital went from being almost overflowing, with operating theatres converted into ICUs with extra beds, to being 25% full currently, which was lower than normal for this time of year.

Quoting her clinical chief at her hospital, Dr Longley said doctors had to realise that, “this is not a sprint, it’s a marathon. We have to be kind to our teams and ourselves.”

“As clinicians we won’t get it right all the time. We can step away. We’re used to being able to deal with, and know what we’re doing. Yet we’ve only been around this disease for some months – in some ways we feel helpless. It’s super important to realise that psychological impact.

“Our intensivists say this is not the normal thing they know. Your staff and patients are frightened. They’ve been told to stay away and self-isolate, and now they’re coming in. It’s reminiscent of the beginning of the AIDS epidemic. Nobody wanted to touch these people.

“There’s also fear from patients, ancillary staff and your own staff and their relatives when they’re ready to go home,” she told her audience, which later peppered her with questions.

“They don’t see your smile. Instead they see your worried eyes. They’re without familiar things. We set up a library in the COVID ward, because they’re there for a long time,” she revealed.

She said she and her colleagues felt guilt over being away from their families, scared they’d bring the virus home, fall ill and have to abandon their colleagues. A significant percentage of her colleagues were asymptomatic or quasi-symptomatic, or as she put it, “slightly under the weather”.

When stressed or tired they were never sure whether they had the virus or if they were suffering psychosomatic symptoms. An irony was that while healthcare workers were afraid of entering COVID wards, these were probably the least risky because everybody was on guard and took precautions. The danger came when working in so-called “clean” zones where you least expected a threat.

She said COVID presented with a host of unexpected non-pulmonary symptoms which made for a steep learning curve. A snapshot of 35 ICU patients showed that 60% had acute kidney injury while others had inflammation and direct invasion of the tubular system, needing continuous electrolyte replacement, having lost large amounts of phosphate, sodium and potassium.

Nervous system symptoms included a dramatic loss of smell, hypo-active delirium with deregulation of the autonomic nervous system, and strokes. Other unexpected variations included, (towards the end of the epidemic), a Kawasaki-like syndrome among a handful of children and young adults (treated with steroids and biologic therapy), myocarditis, diarrhoea and vomiting – associated with hepatitis, not respiratory symptoms.

Dr Longley’s advice was to treat conditions associated with Covid normally, as if they were presenting in isolation.

She emphasised that results were still pending in a 6,000-person London-based study comparing all the world’s highly debated drug therapies suspected to mitigate COVID-19. There was currently no significant evidence to say any worked. Biologicals were currently looking more promising than anti-viral treatments, but nothing had yet succeeded as a prophylactic.

She said the good news was that their HIV positive patients that were virologically suppressed with good CD4 counts displayed no greater risk than the general population. She warned colleagues to be on the look-out for (especially in elderly patients), straightforward presentations like a urinary tract infection.

“Don’t forget to be a doctor – it’s not all COVID!” she said, citing two malaria deaths that occurred simply because the London-based former-travelers tragically self-isolated at home with fever-like or flu symptoms, thinking they had COVID-19.

Aug 5th, 2020
The death rate for patients who experienced what is normally a lower-risk heart attack rose sharply during...
Coronavirus

Aug 5th, 2020
Research published recently, led by King’s College London, has found that high levels of oestrogen may have...

PTSD service dogs: Effective at warning of anxiety and disrupting it

Hedonism as important as self-control for happiness - European study

Backlash to UK call for GP's to have virtual consultations only

Antibiotics alone an alternative to surgery for appendicitis in children

Alcohol abuse may raise risk of death in patients with arrhythmia

New UK guidance: Acupuncture rather than drugs for chronic pain

For seniors, life will never be the same again

ConCourt ruling: Conviction overturned – but what now for the profession?

Head scratching over donation of SA medical supplies to Cuba

Diets high in protein, particularly plant protein, are associated with a lower risk of death from any cause, finds an analysis of the latest...

The out-of-the blue decision to end private-sector primary healthcare cover in March 2021 was “a brutal violation” of constitutional rights...

As much as the country is currently focused on the crisis in Eskom, the nation seems to have lost sight of the looming National Health Insurance...

Public health experts are divided on whether tobacco industry efforts to reduce health impacts and death through smoke-free products should be...

Trying to turn the tide on Africa’s avoidable deaths

Nowhere are the battle lines between public health authorities and Big Tobacco, Big Food and Big Soda sharper than in South Africa and on the African...

Mental health in Africa is ‘neglected and stigmatised’

As the SA government mulls its options to reduce expenditure while funding priority programmes, experts have warned that the abolishment of the...

Doctors in India protest over decision to ‘sanction quackery’

Doctors in India have accused the government of seeking to “sanction quackery” by proposing to allow homeopaths and others trained in alternative...

As the year begins, it’s common for individuals, companies and government departments to have a few things on their list of things to do. City...

Gauteng Health MEC Gwen Ramokgopa assumed office in February, and she is quoted in a News24 report as saying that she believes the department’s...

The SA Health Market Inquiry has blamed private hospitals for much of the above-inflation increases in expenditure reported by medical schemes,...

Classified Advertising
Every week your advertisement will reach more than 46,000 South African health professionals, including more than 37,000 medical doctors.