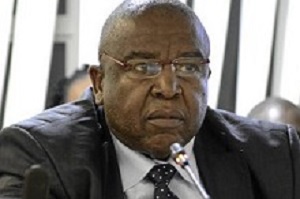 North West Health HoD Dr. Thabo Lekalakala during SCOPA sitting at the North West Legislature last night where he failed to give a report about the 40 new ambulances parked at the Department of Health and MEDIOSA. Photo: Tiro Ramatlhatse

The North West legislature has laid criminal charges against the head of the province’s Health Department, Dr Thabo Lekalakala, following a marathon interrogation over a contract given to a Gupta-linked company, which also paid for his junket to India in 2017.

News24 reports that the committee was looking into claims that a healthcare organisation called Mediosa was awarded a R30m, three-year contract by the North West Health Department, in advance and without it going out to tender. Lekalakala, while being interrogated by the committee, admitted that a delegation from the department was taken to India just seven days after the health group received the payment.

Committee chair Madoda Samabatha is quoted in the report as saying that the HOD was facing numerous charges, which include fraud and corruption, contravening the Public Financial Management Act as well as being in contempt of the legislature. “We say this because the rules of the legislature allow us to force anyone who appears before us to submit documents. He confirmed that there was a contract and, when we asked for the documents, he made us wait for four hours then refused,” said Samabatha. The committee chair said Lekalakala first said he had the service agreement documents. But, when pressed to fetch them, he eventually said they had been removed from the department. “Our issue is that the documents do not exist,” said Samabatha.

The report says he also took issue with the junket to India, claiming it didn’t make sense that it was signed off by both Health MEC Magome Masike and Premier Supra Mahumapelo, yet was not funded by the province. Samabatha believes the payment for the trip was made by the company linked to the infamous Gupta family, which has been placed, alongside former president Jacob Zuma, at the centre of a state capture project where the family is accused of having undue influence over the former head of state as well some government departments and state-owned enterprises.

“He had been approved to go to India, but the provincial government didn’t pay for it. On a trip form you motivate and list the financial implications for the state,” explained Samabatha, who is also the former North West MEC of Public Works.

However, Lekalala is said to have maintained that his spouse as well as a family friend and spouse, who joined him over the weekend during the India trip, had paid for themselves.

The Democratic Alliance’s leader in the province Joe McGluwa accused Lekalakala of being arrogant and taking a page out of some of the corruption which had taken place in the Free State. “What’s happening in the Free State has an identical development in the North West,” said McGluwa.

The report says Mediosa, which was previously known as Cureva, had signed a contract with the Free State Health Department in October 2015. The project, which was valued at R50m, was to supply and run two mobile clinics, with a planned national roll out.
He also said claimed the MEC and HOD were telling vastly different stories to the committee. “One hand clearly doesn’t know what the other hand is doing,” he said.

Jan 13th, 2021
SA Breweries (SAB) will challenge the constitutionality of the blanket ban on alcohol sales, which was...