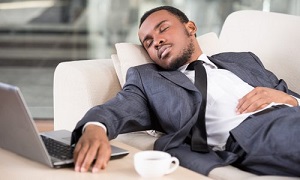 Research presented at the American College of Cardiology's 68th Annual Scientific Session found that people who took advantage of a midday snooze were more likely to have a noticeable drop in blood pressure compared with those who didn't nap.

"Midday sleep appears to lower blood pressure levels at the same magnitude as other lifestyle changes. For example, salt and alcohol reduction can bring blood pressure levels down by 3 to 5 mm Hg," said Dr Manolis Kallistratos, cardiologist at the Asklepieion General Hospital in Voula, Greece, and one of the study's co-authors, adding that a low-dose anti-hypertensive medication usually lowers blood pressure levels by 5 to 7 mm Hg, on average.

Overall, taking a nap during the day was associated with an average 5 mm Hg drop in blood pressure, which researchers said is on par with what would be expected from other known blood pressure-lowering interventions. In addition, for every 60 minutes of midday sleep, 24-hour average systolic blood pressure decreased by 3 mm Hg.

"These findings are important because a drop in blood pressure as small as 2 mm Hg can reduce the risk of cardiovascular events such as heart attack by up to 10%," Kallistratos said. "Based on our findings, if someone has the luxury to take a nap during the day, it may also have benefits for high blood pressure. Napping can be easily adopted and typically doesn't cost anything."

"The higher the blood pressure levels, the more pronounced any effort to lower it will appear. By including people with relatively well-controlled blood pressure, we can feel more confident that any significant differences in blood pressure readings are likely due to napping," Kallistratos said.

The study included 212 people with a mean blood pressure of 129.9 mm Hg. They were 62 years old on average and just over half were female. About 1 out of 4 participants were smokers and/or had type 2 diabetes. The groups were similar in terms of risk factors for heart disease except there were more smokers in the napping group.

Researchers assessed and recorded blood pressure for 24 hours consecutively, midday sleep time (the average duration was 49 minutes), lifestyle habits (for example, alcohol, coffee and salt consumption, physical activity levels), and pulse wave velocity, a measure of stiffness in the arteries. Participants wore an ambulatory blood pressure monitor to measure and track blood pressure at regular intervals during routine daily living, rather than just one time in the clinic. At study recruitment, participants also underwent an echocardiogram, an ultrasound of the heart that shows its structure and function.

In their analyses, researchers adjusted for factors known to influence blood pressure levels, including age, gender, lifestyle and medications. There were no differences in terms of the number of anti-hypertensive medications taken between the two groups, and pulse wave velocity tests and echocardiograms were also similar.

"We obviously don't want to encourage people to sleep for hours on end during the day, but on the other hand, they shouldn't feel guilty if they can take a short nap, given the potential health benefits," Kallistratos said. "Even though both groups were receiving the same number of medications and blood pressure was well controlled, there was still a significant decrease in blood pressure among those who slept during midday."

Further research is needed to validate these findings. Although it falls outside the scope of this study, researchers said one could speculate that along with the heart-healthy Mediterranean diet endemic to this region, the cultural acceptance of midday napping may also play a role in the healthier profile seen in these populations.

Abstract
Background: Lifestyle changes decrease blood pressure (BP) levels by 3 to 5 mmHg in patients with arterial hypertension. This study had the purpose to assess the effect of mid-day sleep on blood pressure levels in hypertensive patients.
Methods: We prospectively studied two hundred and twelve (212) hypertensive patients. Mid-day sleep time (in minutes), life style habits, anthropometric characteristics, were recorded and office BP, ambulatory blood pressure monitoring, pulse wave velocity (PWV), augmentation index (AI) were measured. A standard doppler and tissue-doppler echocardiographic evaluation was performed
Results: 53.8% of the patients were female, the mean age was 62.5±11.0 years while the mean body mass index was 28.9±5.4kg/m2 . The mean value of average 24h systolic and diastolic BP (SBP & DBP) were 129.9±13.2/76.7±7.9 mmHg respectively. Most of the subjects (74.6% of the sample) were non-smokers and didn’t have diabetes mellitus (74.6%). The mean midday sleep duration was 48.7±54.3 min. Average 24 hours SBP (127.6±12.9 mmHg vs 132.9±13.1 mmHg), average day SBP & DBP were lower in the patients who sleep at midday, compared to those who don’t
(128.7±13/76.2±11.5 vs 134.5±13.4/79.5±10.4 mmHg) (p<0. 005). The effect was not correlated to the dipping status of patients. The midday sleep duration was negatively correlated with average 24 hour SBP & day SBP. In a linear regression model, for every 60 min of midday sleep, 24h average SBP decreases by 3 mmHg (p<0. 001). There were no differences in the number of antihypertensive medications, PWV, AI or echocardiographic indices (left ventricular wall thickness, left atrial size) between the groups.
Conclusion: Mid-day sleep significantly decreases average and day SBP/DBP in hypertensives. Its effect is as potent as other wellestablished life style changes and is independent of the dipping status of patients. It should be recorded in patients’ history and encouraged if applicable to their daily schedule.