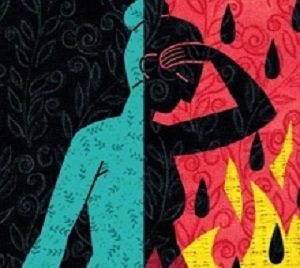 An experimental drug has been shown to dramatically cut the number of hot flushes in women with severe menopause symptoms, says a Pharmaceutical Journal report. In a phase II randomised trial of the neurokinin 3 receptor antagonist MLE4901 in 28 women aged 40-62 years who had seven or more hot flushes a day, a significant reduction in symptoms was found in women who took the drug.

The trial was designed as a placebo-controlled crossover study, so women taking part took the test drug followed by placebo, or placebo followed by the test drug, and acted as their own controls. The research team at Imperial College London, which conducted the study, said the treatment seemed to be “pretty life-changing”.

The study, which was funded by the UK Medical Research Council and the National Institute for Health Research, also showed the drug – originally developed by AstraZeneca – reduced the impact of flushes on participants’ daily life.

Professor Waljit Dhillo, an NIHR research professor from the department of medicine at Imperial College London, says the drug could be a “game-changer” for women having more than seven hot flushes a day. “For day-to-day living and work, that’s a significant impact on quality of life.”

Women taking part in the trial said they felt “human again”, says study leader Julia Prague. “Despite the fact that for millions of women their menopausal symptoms are intolerable, so many are suffering in silence because it is a taboo subject and treatment options are limited.”

Once the drug is tested in a larger study, it is hoped to become an alternative for hormone replacement therapy, which some patients are advised against taking because of the increased risk of breast cancer and blood clots.

Professor Mary Ann Lumsden, senior vice president of the Royal College of Obstetricians and Gynaecologists, says that the study is welcome news for women going through the menopause, but “it is a relatively small trial and further research is needed”.

Summary
Background: Hot flushes affect 70% of menopausal women and often severely impact physical, psychosocial, sexual, and overall wellbeing. Hormone replacement therapy is effective but is not without risk. Neurokinin B signalling is increased in menopausal women, and has been implicated as an important mediator of hot flushes.
Methods: This phase 2, randomised, double-blind, placebo-controlled, single-centre, crossover trial assessed the effectiveness of an oral neurokinin 3 receptor antagonist (MLE4901) on menopausal hot flushes. Eligible participants were healthy women aged 40–62 years, having seven or more hot flushes in every 24 h of which some were reported as being severe or bothersome, who had not had a menstrual period for at least 12 months, and who had not been taking any medication shown to improve menopausal flushes in the preceding 8 weeks. Participants received 4 weeks of MLE4901 (40 mg, orally, twice daily) and placebo (orally, twice daily) in random order separated by a 2 week washout period. Randomisation was completed by a central computer, and participants were allocated to treatment number in numerical order. The primary outcome was the total number of hot flushes during the final week of both treatment periods. Analyses were by intention to treat and per protocol using generalised linear mixed models and standard crossover analysis. All analyses were prespecified in the study protocol. The trial is registered at ClinicalTrials.gov, number NCT02668185.
Findings: 68 women were screened between Feb 3 and Oct 10, 2016, of which 37 were randomly assigned and included in an intention-to-treat analysis. 28 participants completed the trial and were included in a per-protocol analysis. MLE4901 significantly reduced the total weekly number of hot flushes by 45 percentage points (95% CI 22–67) compared with the placebo (intention-to-treat adjusted means: placebo 49·01 [95% CI 40·81–58·56] vs MLE4901 19·35 [15·99–23·42]; adjusted estimate of difference 29·66 [17·39–42·87], p<0·0001). Treatment was well tolerated. Three participants developed a transaminase rise (alanine aminotransferase 4·5–5·9 times the upper limit of normal) with a normal bilirubin 28 days after starting MLE4901, which normalised within 90 days.
Interpretation: Treatment with a neurokinin 3 receptor antagonist (MLE4901) could be practice changing as it safely and effectively relieves hot flush symptoms without the need for oestrogen exposure. Larger scale studies of longer duration are now indicated.