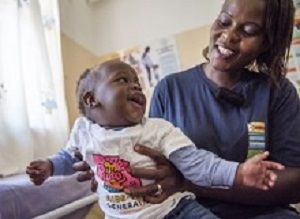 In 2017, 180,000 children were living with HIV. Without prompt diagnosis and treatment, the greatest risk for death is between eight and ten weeks of age with half of the infants dying before the age of two. The Children with HIV (CHER) study showed a 76% reduction in disease and a 75% reduction in death, with notable short-term cost reductions, when HIV-positive infants started antiretroviral therapy (ART) under three months of age.

Infants are usually diagnosed with HIV testing performed at central laboratories. The challenges of this conventional form of early infant diagnosis (EID) are well documented, notably the significant delays in getting results to clinicians and caregivers. Devices for EID used at the point of care (POC) are simple to operate, can be used in a wide variety of settings and deliver results within 90 minutes. They have the potential to speed up initiation of treatment.

However, given their relatively recent introduction, studies assessing the effect on service delivery and clinical outcomes are scant.

With the support of the EGPAF, phased introduction of point-of-care early infant diagnosis (POC EID) testing as part of routine care for infants exposed to HIV began in December 2016 in Cameroon, Côte d’Ivoire, Kenya, Lesotho, Mozambique, Rwanda, Swaziland and Zimbabwe.

The researchers implemented a hub and spoke model in seven of the eight countries, in which the POC EID devices were kept at ‘hub’ clinics. Other healthcare facilities, within one hour’s drive of the hub, were ‘spokes’ which sent samples to the hub.

A wide range of sites were selected, including regional hospitals, primary healthcare facilities, prevention of mother-to-child transmission services, and maternity services. They were in both rural and urban environments, some with high demand for EID and some with low demand.

Two battery powered, quality-assured POC testing devices, m-PIMA and GeneXpertGX-IV, were used in the intervention sites. Healthcare workers were trained on sample collection. The ministry of health in each country gave EGPAF approval to update the testing algorithm to include POC EID.

Retrospective data on conventional EID was collected on 2875 infants exposed to HIV and tested at 96 healthcare facilities prior to March 2017. Data on POC testing was collected on 18,220 infants tested at 339 healthcare facilities in the 12 months from December 2016. There was loss to follow-up for both conventional and POC testing at each step, from sample collection to return of results or antiretroviral initiation.

Compared to conventional testing, POC was highly effective and showed significant improvements in service delivery. The median time from sample collection to return of results to caregivers was reduced from 55 days to 0 days (p < 0.00001) and from sample collection to start of ART initiation in HIV-positive infants from 49 days to 0 days (p < 0.0001). The proportion of infants started on ART within 60 days of sample collection was 43.3% (42/97 infants) for conventional testing and 92.3% (639/692 infants) for POC, p < 0.0001. The median age for antiretroviral initiation among infants with HIV who were tested at six to eight weeks was 3.3 (IQR: 2.5-4.4) months for conventional testing and 1.6 (IQR: 1.5-2.0) for POC testing, p < 0.0001 – 85% of infants were tested at prevention of mother-to-child transmission clinics and 6% at maternity clinics, with an HIV prevalence of 3.2% and 1.1% respectively.

However, there was a higher prevalence of HIV at inpatient and outpatient services, 15.2% and 17.7%, respectively. POC EID would be highly beneficial in such settings where children often have advanced disease and are in urgent need of treatment. In addition, the success of prevention of mother-to-child transmission programmes means POC EID will become increasingly important to identify infants with HIV in other healthcare settings.

The cost for each test result returned within 30 days was $27.24 for POC compared to $131.02 for conventional testing. Cost efficacy was confirmed and supported by an earlier modelling study.

This approach, the authors conclude, has the potential to reduce death and disease in infants with HIV. They call for national programmes, funders and implementing partners to consider implementing POC EID as a preferred testing strategy.

In an accompanying comment Drs Cotton and Rabie state that while the benefits and necessity of point-of-care early diagnosis are indisputable, they question its implementation and maintenance in the same settings without the support of a research infrastructure. Barriers include maintenance of the devices, adequate power, cartridge availability and a lack of trained personnel.

They note a discrepancy in antiretroviral initiation at prevention of mother-to-child clinic settings (95.1%), which was extremely successful compared to other settings (ranging from 66.7 to 87.2%). The discrepancy should be rectified, and communication between hubs and spokes supported. They say data on performance should be collected prospectively and coupled with implementable plans.

The benefits of POC for EID cannot be ignored, nor can this programme afford to fail, they stress.

Abstract
Background: In 2017, there were 180 000 estimated new HIV infections in children aged 0–14 years. Without early diagnosis and treatment, half of infants with HIV die by age 2 years, with peak mortality around age 8–10 weeks. Conventional early infant diagnosis (EID) systems have not consistently returned results in a timely manner. However, point-of-care (POC) EID devices, which are new to market, could improve outcomes. In December, 2016, POC EID testing was introduced in eight sub-Saharan African countries as part of routine service delivery. We aimed to compare key service delivery and clinical outcomes and costs of POC versus conventional EID.
Methods: In our observational study, we compared service delivery and clinical outcomes in eight countries (Cameroon, Côte d'Ivoire, Kenya, Lesotho, Mozambique, Rwanda, Swaziland, and Zimbabwe), before and after a POC intervention was introduced for EID of HIV. For the baseline, pre-intervention sample, we sampled 30 consecutive tests for HIV-exposed infants who had a documented date of blood collection for EID within Ministry of Health registers in a subset of Elizabeth Glaser Pediatric AIDS Foundation (EGPAF)-supported sites that would be enrolled in POC. For the post-intervention sample, all infants who were tested with POC EID for HIV at an EGPAF site were included in the sample. For both conventional and POC EID testing, we did not specify an age range, but used national EID guidelines for EID eligibility. A range of sites for conventional data collection were selected to represent both primary testing sites (where POC EID instruments would be placed) and spoke sites, rural and urban environment, and high throughput and low throughput sites. In all countries, except Mozambique, we developed a POC EID test request form in conjunction with the Ministry of Health. In Mozambique, EGPAF-trained staff extracted data from health facility registers and other sources using a data collection form. Certain specific indicators were required for all countries, but countries could collect additional variables, as the POC EID test request form was used for patient management for the duration of the project. These forms were filled in by health-care providers at the facility. Once the form was completed it was collected by EGPAF staff and entered into a project-specific database. The cost per test result returned was approximated by use of the Global Fund's total cost of ownership estimates.
Findings: Retrospective collection of data on clinical and service delivery outcomes of conventional testing began on Nov 14, 2016, and was completed on Nov 26, 2017, for tests done between March 3, 2014, and March 30, 2017, at 96 health-care facilities using conventional testing. POC tests were done at 339 health-care facilities between Dec 1, 2016, and Dec 31, 2017. We evaluated data from 2875 infants exposed to HIV who were tested with conventional testing methods (2899 tests) and 18 220 infants tested with POC testing (19 071 tests). Several EID outcomes were significantly improved with POC testing relative to conventional testing. The return of results to caregivers within 30 days (in 18 737 [98·3%] of 19 058 infants receiving POC testing vs 542 [18·7%] of 2898 infants receiving conventional testing; p<0·0001), the median time from sample collection to return of results to caregivers (0 vs 55 days; p<0·0001), the number of infants with HIV initiating antiretroviral therapy (ART) within 60 days of sample collection (639 [92·3%] of 692 infants vs 42 [43·3%] of 97 infants; p<0·0001), the median time from sample collection to ART initiation among infants with HIV (0 vs 49 days; p<0·0001), and the median age at ART initiation among infants with HIV who were tested at 6–8 weeks (1·6 vs 3·3 months; p<0·0001) were all improved with POC testing compared with conventional testing. The cost per test result returned within 30 days was less for POC (US$27·24, range 21·39–33·10) than conventional testing ($131·02, 96·26–165·76).
Interpretation: POC EID improves the speed of return of HIV test results and enables earlier ART initiation; this approach could potentially reduce morbidity and mortality in infants with HIV. National programmes, funders, and implementing partners should consider POC EID as a preferred testing strategy for implementation.