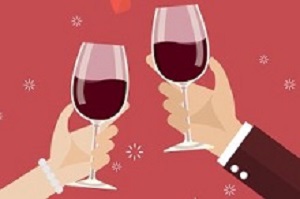 Spouses with uncontrolled drinking problems have a 'large and rapid' CAUSAL influence on the likelihood their partner will also be diagnosed with an alcohol use disorder. Reuters Health reports that this is according to a long-term study of married couples in Sweden.

After a husband was first diagnosed with alcohol use disorder (AUD), his wife’s risk of a similar diagnosis immediately rose 14-fold compared to women whose husbands did not have that diagnosis, researchers found. But then her risk fell during the next couple of years to about four-fold. Similarly, husbands’ risk shot up nine-fold after a wife’s diagnosis, then declined to about three-fold.

It’s long been known that spouses tend to resemble each other in alcohol consumption and abuse, the report says the study team writes, but it hasn’t been clear whether that’s because people with similar habits seek each other out, or because partners exert a strong influence on one another.

When the researchers looked at whether people had alcohol use disorders before their first marriage, and what happened in second and third marriages, they found that one spouse experiencing the disorder strongly influences the other’s current risk.

“Marriage partners can have a very substantial and causal effect on each other’s risk for AUD. In treating one married individual, you need to take their spouse into account,” lead author Dr Kenneth S Kendler, a professor of psychiatry and human and molecular genetics at Virginia Commonwealth University, in Richmond, is quoted in the report as saying.

About 15m adults in the US age 18 or older have alcohol use disorder, according to the National Institute on Alcohol Abuse and Alcoholism (NIAAA). An estimated 88,000 people with AUD die from alcohol-related causes annually, including liver damage, certain cancers and car crashes.

For the new analysis, which is the largest and first to look at risk over time and across multiple marriages, Kendler and his colleagues examined data collected from Swedish medical, criminal and pharmacy registries of residents born between 1960 and 1990. They identified 8,562 couples in first marriages with no history of alcohol use disorder in either partner prior to marriage and one spouse developing the disorder during the marriage.

However, after a first marriage to a spouse without an alcohol use disorder, individuals who married a partner with the disorder raised their own risk seven- to nine-fold. A similar, but weaker risk increase was seen in third marriages with these combinations.

“The finding that marriage to a non-AUD spouse can be somewhat protective for individuals who subsequently marry spouses with AUD in one spouse and the risk of developing AUD in the other spouse is novel,” Dr Marcia Scott, a project officer in the NIAAA division of epidemiology and prevention research, said in the report.

Scott, who was not involved in the research, also said part of what makes this study unique is the focus on the temporal relationship between the development of AUD in one spouse and the risk of developing AUD in the other spouse.

Among the study’s limitations is that it is based on registry data and likely reflects a higher proportion of individuals more severely affected by medical and legal problems than other prior studies, the authors note.

Past research among twins and children of alcoholics has shown that genetic factors do influence alcoholism, they add. The current study indicates, though, that alcohol use disorders shared by married couples are not just a result of people seeking out mates who are similar to them in this regard, the authors write.

“Additional research can help to illuminate the interplay of social and genetic factors on risk and protective mechanisms of marital status on development of AUD across the lifespan, and the impact of these factors on couples’ children as well,” Scott said.