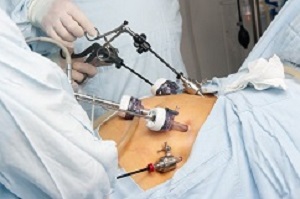 Obese patients undergoing bariatric surgery have half the risk of death, compared with those tackling their weight through diet and behaviour alone, a large Northwestern University study suggests. Professor Francesco Rubino, of King’s College London, who was not involved in the studies, saysthat 'misunderstandings and stigma' were holding back greater use of such operations.

Experts say obesity surgery is cost-effective, leads to substantial weight loss and can help tackle type 2 diabetes. “We don’t think this (new study) alone is sufficient to conclude that obese patients should push for bariatric surgery, but this additional information certainly seems to provide additional support,” said Philip Greenland, co-author of the study from Northwestern University.

The report says in the study, researchers sought to explore whether stomach-shrinking operations, known as bariatric surgery, had a long-term impact on the risk of death among obese individuals, compared with non-surgical approaches to weight loss.

In total, more than 33,500 participants were involved in the study – 8,385 of whom had one of three types of bariatric surgery between 2005 and 2014. The majority of participants had a BMI greater than 35; obesity is defined as a BMI of 30 or higher.

The researchers followed up the participants over the years that followed their surgery until death, or the end of the follow-up period in December 2015, comparing the number of deaths and other metrics with those for obese patients who had not had surgery but were given dietary and behavioural help. Each surgery patient was compared to three who did not have surgery, but had similar characteristics such as age and sex, and were also followed until they too had surgery, died or the study ended.

The results reveal that the death rate during the study was 1.3% for those who had any form of bariatric surgery, while among those who had not had surgery it was 2.3%, although the length of follow-up period varied considerably from patient to patient.

Once other factors including age, sex and related diseases were taken into account, the team found those who did not have stomach-shrinking surgery had just over twice the risk of death compared to those who had, with all three types of surgery linked to lower mortality.

What’s more, the group which had surgery showed a greater reduction in BMI, lower rates of new diabetes diagnoses, improved blood pressure, and a greater proportion of diabetic individuals going into remission.

But the team add that a small proportion of surgery patients required further surgery, while they note the study was observational so cannot prove bariatric surgery itself reduced the risk of death since patients were not randomised, meaning it is possible that those who did not have surgery were in poorer health.

The report says a second, smaller study in the same journal also highlighted benefits of bariatric surgery, comparing diabetes-related markers in obese adults who had lived with a diagnosis of type 2 diabetes for an average of nine years. Participants either received two years of intensive diet, exercise and medical management or, in addition, had bariatric surgery.

The results from 113 participants reveal that complications were more common among those who had had bariatric surgery, but that one year after the study began they had lost more weight on average, with a greater proportion having reached the combined targets for cholesterol, systolic blood pressure and a marker of glucose.

While this proportion fell for both groups after five years – at which point 98 patients were still providing data – those who had had bariatric surgery maintained the edge, with 23% reaching the combined targets, compared to just 4% of those offered lifestyle and medical interventions alone.

Francesco Rubino, professor of metabolic and bariatric surgery at King’s College London, who was not involved in the studies, is quoted in the report as saying that misunderstandings and stigma were holding back greater use of such operations in the UK. While Rubino noted that surgery is not for everyone, he added “This is a conversation GPs and doctors should have with patients more often.”

Abstract 1
Importance: Bariatric surgery is an effective and safe approach for weight loss and short-term improvement in metabolic disorders such as diabetes. However, studies have been limited in most settings by lack of a nonsurgical group, losses to follow-up, missing data, and small sample sizes in clinical trials and observational studies.
Objective: To assess the association of 3 common types of bariatric surgery compared with nonsurgical treatment with mortality and other clinical outcomes among obese patients.
Design, Setting, and Participants: Retrospective cohort study in a large Israeli integrated health fund covering 54% of Israeli citizens with less than 1% turnover of members annually. Obese adult patients who underwent bariatric surgery between January 1, 2005, and December 31, 2014, were selected and compared with obese nonsurgical patients matched on age, sex, body mass index (BMI), and diabetes, with a final follow-up date of December 31, 2015. A total of 33 540 patients were included in this study.
Exposures: Bariatric surgery (laparoscopic banding, Roux-en-Y gastric bypass, or laparoscopic sleeve gastrectomy) or usual care obesity management only (provided by a primary care physician and which may include dietary counseling and behavior modification).
Main Outcomes and Measures: The primary outcome, all-cause mortality, matched and adjusted for BMI prior to surgery, age, sex, socioeconomic status, diabetes, hyperlipidemia, hypertension, cardiovascular disease, and smoking.
Results: The study population included 8385 patients who underwent bariatric surgery (median age, 46 [IQR, 37-54] years; 5490 [65.5%] women; baseline median BMI, 40.6 [IQR, 38.5-43.7]; laparoscopic banding [n = 3635], gastric bypass [n = 1388], laparoscopic sleeve gastrectomy [n = 3362], and 25 155 nonsurgical matched patients (median age, 46 [IQR, 37-54] years; 16 470 [65.5%] women; baseline median BMI, 40.5 [IQR, 37.0-43.5]). The availability of follow-up data was 100% for all-cause mortality. There were 105 deaths (1.3%) among surgical patients during a median follow-up of 4.3 (IQR, 2.8-6.6) years (including 61 [1.7%] who underwent laparoscopic banding, 18 [1.3%] gastric bypass, and 26 [0.8%] sleeve gastrectomy), and 583 deaths (2.3%) among nonsurgical patients during a median follow-up of 4.0 (IQR, 2.6-6.2) years. The absolute difference was 2.51 (95% CI, 1.86-3.15) fewer deaths/1000 person-years in the surgical vs nonsurgical group. Adjusted hazard ratios (HRs) for mortality among nonsurgical vs surgical patients were 2.02 (95% CI, 1.63-2.52) for the entire study population; by surgical type, HRs were 2.01 (95% CI, 1.50-2.69) for laparoscopic banding, 2.65 (95% CI, 1.55-4.52) for gastric bypass, and 1.60 (95% CI, 1.02-2.51) for laparoscopic sleeve gastrectomy.
Conclusions and Relevance: Among obese patients in a large integrated health fund in Israel, bariatric surgery using laparoscopic banding, gastric bypass, or laparoscopic sleeve gastrectomy, compared with usual care nonsurgical obesity management, was associated with lower all-cause mortality over a median follow-up of approximately 4.5 years. The evidence of this association adds to the limited literature describing beneficial outcomes of these 3 types of bariatric surgery compared with usual care obesity management alone.

Abstract 2
Importance: The Roux-en-Y gastric bypass is effective in achieving established diabetes treatment targets, but durability is unknown.
Objective: To compare durability of Roux-en-Y gastric bypass added to intensive lifestyle and medical management in achieving diabetes control targets.
Design, Setting, and Participants: Observational follow-up of a randomized clinical trial at 4 sites in the United States and Taiwan, involving 120 participants who had a hemoglobin A1c (HbA1c) level of 8.0% or higher and a body mass index between 30.0 and 39.9 (enrolled between April 2008 and December 2011) were followed up for 5 years, ending in November 2016.
Interventions: Lifestyle-intensive medical management intervention based on the Diabetes Prevention Program and LookAHEAD trials for 2 years, with and without (60 participants each) Roux-en-Y gastric bypass surgery followed by observation to year 5.
Main Outcomes and Measures: The American Diabetes Association composite triple end point of hemoglobin A1cless than 7.0%, low-density lipoprotein cholesterol less than 100 mg/dL, and systolic blood pressure less than 130 mm Hg at 5 years.
Results: Of 120 participants who were initially randomized (mean age, 49 years [SD, 8 years], 72 women [60%]), 98 (82%) completed 5 years of follow-up. Baseline characteristics were similar between groups: mean (SD) body mass index 34.4 (3.2) for the lifestyle–medical management group and 34.9 (3.0) for the gastric bypass group and had hemoglobin A1c levels of 9.6% (1.2) and 9.6% (1.0), respectively. At 5 years, 13 participants (23%) in the gastric bypass group and 2 (4%) in the lifestyle-intensive medical management group had achieved the composite triple end point (difference, 19%; 95% CI, 4%-34%; P = .01). In the fifth year, 31 patients (55%) in the gastric bypass group vs 8 (14%) in the lifestyle–medical management group achieved an HbA1c level of less than 7.0% (difference, 41%; 95% CI, 19%-63%; P = .002). Gastric bypass had more serious adverse events than did the lifestyle–medical management intervention, 66 events vs 38 events, most frequently gastrointestinal events and surgical complications such as strictures, small bowel obstructions, and leaks. Gastric bypass had more parathyroid hormone elevation but no difference in B12 deficiency.
Conclusions and Relevance: In extended follow-up of obese adults with type 2 diabetes randomized to adding gastric bypass compared with lifestyle and intensive medical management alone, there remained a significantly better composite triple end point in the surgical group at 5 years. However, because the effect size diminished over 5 years, further follow-up is needed to understand the durability of the improvement.

Jul 28th, 2021
Obese people who had bariatric surgery to reduce their weight appeared to get an added benefit of a markedly...
A Focus
July 28th, 2021