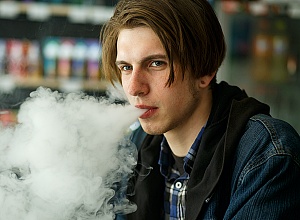 As reports in the United States of severe lung illnesses related to vaping began to make headlines in 2019, rates of cannabis vaping among high school students were soaring, according to high quality survey data analysed by New York University, writes John Gever for MedPage Today.

Cannabis vaping involves inhalation of evaporated oils or from heated concentrates known as dabs, according to the MedPage Today story published on 6 May 2021.

These increases accompanied what was the most frightening, and still somewhat mysterious, respiratory disease outbreak in recent years, until it was eclipsed by the COVID-19 pandemic. Nearly 3,000 Americans, mostly young adults, fell ill with EVALI – e-cigarette or vaping-associated lung injury – and 68 died, Palamar noted.

Epidemiological and lab research eventually settled on vitamin E acetate, a common component of illicit cannabis vaping products, as the likely cause, even though a substantial minority of victims denied use of such products.

Palamar's analysis drew on Monitoring the Future data on 4,072 students in 10th and 12th grades in 2018 and 8,314 in 2019, writes MedPage Today. Other highlights from the analysis include:

An open question, not addressed in Palamar's study, is the extent to which school closures and social restrictions resulting from the COVID-19 pandemic affected these trends, and Monitoring the Future data won't shed light on that for some time. That's because the survey was stopped in March 2020, as school closures took hold, writes John Gever in MedPage Today.

Still, the survey’s truncated 2020 data showed that the number of 10th graders saying cannabis was ‘fairly easy’ or ‘very easy’ to obtain declined sharply, accelerating a trend underway for more than 20 years, and despite the spread of legal marijuana.

Palamar noted several limitations to his analysis and to Monitoring the Future in general. Drug use data came from unverified self-reporting, and the survey is conducted at participating schools, meaning that students “chronically absent or who dropped out are underrepresented”, he wrote. Also, some sub-groups were too small to permit detailed examination, such as students reporting daily cannabis vaping.

Increases in Frequent Vaping of Cannabis Among High School Seniors in the United States, 2018-2019

Published in the Journal of Adolescent Health on 7 May 2021.

Studies have examined trends in cannabis vaping, but research is needed to examine trends in more frequent use as this may increase risk for adverse health outcomes.

Data were from 12,561 high school seniors participating in the Monitoring the Future national study. Prevalence of self-reported frequent vaping of cannabis (defined as using ≥10 times in the past month) was compared between 2018 and 2019 cohorts.

Notable significant increases occurred among students aged ≥18 years (a 154.9% increase), female students (a183.5% increase), those who go out 4 to 7 evenings per week (a 163.0% increase), and those reporting past-year non-medical prescription opioid use (a 184.7% increase).

Frequent vaping of cannabis is increasing among adolescents in the United States, particularly among selected subgroups.