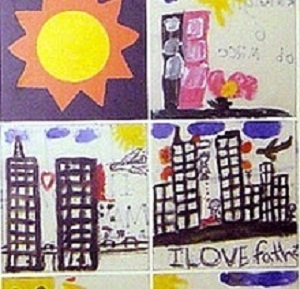 Sixteen years after the collapse of the World Trade Centre towers sent a cloud of toxic debris across Lower Manhattan, children living nearby who likely breathed in the ash and fumes are showing early signs of risk for future heart disease.

This is the main finding of an analysis by New York University Langone Health researchers of blood tests of 308 children, 123 of whom may have come in direct contact with the dust on 9/11. Researchers found that children with higher blood levels of the chemicals known to be in the dust had elevated levels of artery-hardening fats in their blood.

"Since 9/11, we have focused a lot of attention on the psychological and mental fallout from witnessing the tragedy, but only now are the potential physical consequences of being within the disaster zone itself becoming clear," says study lead investigator and health epidemiologist Dr Leonardo Trasande, an associate professor at NYU School of Medicine.

Study children who were more likely to be exposed to the dust, mostly young adults now, were enrollees in the World Trade Centre Health Registry (WTCHR), which is helping to track the physical and mental health, through annual check-ups, of nearly 2,900 children who either lived or attended school in Lower Manhattan on 9/11. According to Trasande, his study is the first to suggest long-term cardiovascular health risks in children from toxic chemical exposure on 9/11.

He says the long-term danger may stem from exposure to certain perfluoroalkyl substances (PFASs) – chemicals released into the air as electronics and furniture burned in the disaster. These include perfluorooctanoic acid (PFOA), widely used to make plastics more flexible until its health effects, including lower-than-normal birthweights and brain damage, led US manufacturers to stop using it in 2014.

An analysis by Trasande in January 2017 showed that the same 123 children in the WTCHR had significantly higher PFOA blood levels than 185 children who were not living or studying in the city on the day of the attack.

Among the latest study's results was that roughly every threefold increase in blood PFOA levels was tied to an average 9% to 15% increase in blood fats, including LDL cholesterol and triglycerides. According to Trasande, raised fat levels in the blood, especially LDL, are known risk factors for heart disease and can if left unchecked lead to blood vessel blockages and heart attack.

Fortunately, he says, these very early signs of cardiovascular risk observed in the WTCHR children can generally be addressed by diet, weight control, and exercise. "Our study emphasises the importance of monitoring the health consequences from 9/11 in children exposed to the dust, and offers hope that early intervention can alleviate some of the dangers to health posed by the disaster," says Trasande.

In another study, a different research team at NYU found raised blood levels of C-reactive protein (CRP) in people who reported being exposed to WTC dust on 9/11. Previous research has linked increases in CRP to inflammation and higher rates of post-traumatic stress disorder (PTSD). The study involved 641 men and women whose health was being monitored at NYC Health + Hospitals/Bellevue for effects linked to 9/11.

Researchers found that people with raised CRP had a 12% greater risk of PTSD than people whose CRP was not elevated.

Abstract
Background: Large amounts of various chemical contaminants, including perfluoroalkyl substances (PFASs), were released at the time of the World Trade Center (WTC) disaster. Thousands of children who lived and/or attended school near the disaster site were exposed to these substances but few studies have examined the possible consequences related to these exposures.
Objectives: To examine the relationship of PFASs serum levels with cardiometabolic profile in children and adolescents enrolled in the World Trade Center Health Registry (WTCHR) and a matched comparison group.
Methods: We evaluated WTCHR enrollees who resided in New York City and were born between September 11, 1993 and September 10, 2001, and a matched comparison group consisting of individuals who were ineligible for WTCHR participation upon distance of their home, school or work from the WTC and lack of participation in rescue and recovery activities. Matching was based on date of birth, sex, race, ethnicity, and income. We assessed exposure to PFASs, as measured by serum levels and association with cardiometabolic profile as measured by arterial wall stiffness, body mass index, insulin resistance, fasting total cholesterol, HDL, LDL and triglycerides.
Results: A total of 402 participants completed the study and serum samples were analyzed from 308 participants, 123 in the WTCHR group and 185 in the comparison group. In multivariable regression analysis, after adjusting for relevant confounders, we observed a significant, positive association of perfluorooctanoic acid (PFOA) with triglycerides (beta coefficient = 0.14, 95% CI: 0.02, 0.27, 15.1% change), total cholesterol (beta coefficient = 0.09, 95% CI: 0.04, 0.14, 9.2% change), and LDL cholesterol (beta coefficient = 0.11, 95% CI: 0.03, 0.19, 11.5% change). Perfluorohexanesulfonic acid levels were associated with decreased insulin resistance (beta coefficient = − 0.09, 95% CI: − 0.18, − 0.003, − 8.6% change); PFOA and perfluorononanoic acid were associated with increased brachial artery distensibility.
Conclusions: This research adds to our knowledge of the physical health impacts in a large group of children exposed to the WTC disaster. Abnormal lipid levels in young adults might be an early marker of atherosclerosis and cardiovascular diseases and our findings highlight the importance of conducting longitudinal studies in this population.