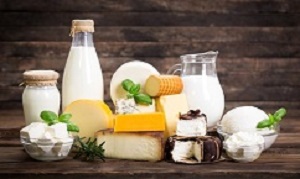 Dairy consumption of around three servings per day is associated with lower rates of cardiovascular disease (CVD) and mortality, compared to lower levels of consumption, according to a study led by a team of McMaster University researchers. The study also found that people who consumed three servings of whole fat dairy per day had lower rates of mortality and cardiovascular disease compared to those who consumed less than 0.5 serving of whole fat dairy per day.

The global observational study included more than 130,000 people in 21 countries.

"Our findings support that consumption of dairy products might be beneficial for mortality and cardiovascular disease, especially in low-income and middle-income countries where dairy consumption is much lower than in North America or Europe," said Mahshid Dehghan, lead author of the study and an investigator at the Population Health Research Institute (PHRI) of McMaster University and Hamilton Health Sciences.

The findings are consistent with previous meta-analyses of observational studies and randomised trials, but stand in contrast to current dietary guidelines which recommend consuming two to four servings of fat-free or low-fat dairy per day, and minimising consumption of whole-fat dairy products for cardiovascular disease prevention.

Cardiovascular disease is the leading cause of mortality worldwide. The authors conclude that the consumption of dairy should not be discouraged and should even perhaps be encouraged in low-income and middle-income countries where dairy consumption is low.

The Prospective Urban Rural Epidemiological (PURE) study included data from 136,384 individuals aged 35-70 years in 21 countries. Dietary intakes were recorded at the start of the study using country-specific validated food questionnaires. Participants were followed up for an average of 9.1 years. During this time, there were 6,796 deaths and 5,855 major cardiovascular events.

One standard serving of dairy was equivalent to a glass of milk at 244 grams, a cup of yogurt at 244g, one slice of cheese at 15g, or a teaspoon of butter at 5g. Participants were grouped into four categories: no dairy, less than one serving per day, one to two servings per day, and more than two servings per day.

The authors say that more research is now needed into why dairy might be associated with lower levels of cardiovascular diseases. The recommendation to consume low-fat dairy is based on the presumed harms of saturated fats on a single cardiovascular risk marker, LDL cholesterol.

However, evidence suggests that some saturated fats may be beneficial to cardiovascular health, and dairy products may also contain other potentially beneficial compounds, including specific amino acids, unsaturated fats, vitamin K1 and K2, calcium, magnesium, potassium, and potentially probiotics. The effect of dairy on cardiovascular health should therefore consider the net effect on health outcomes of all these elements.

Limitations include that diets were self-reported. While multiple weighted food records may be more accurate, they require extensive training, motivation, awareness and literacy which limits the practicality for such a large long-term study.

The authors also note that diet was measured at baseline, and that changes in diet may have occurred over time. However, they add that the association between milk intake at three years follow up and cardiovascular disease was similar to the analyses using baseline information, suggesting that repeat measurements is unlikely to alter the findings.

Jimmy Chun Yu Louie from the University of Hong Kong and Anna Rangan of the University of Sydney, who provided a comment on the study, stated that dairy dietary guidelines do not need to change just yet. "The results from the PURE study seem to suggest that dairy intake, especially whole-fat dairy, might be beneficial for preventing deaths and major cardiovascular diseases," they wrote.

"However, as the authors themselves concluded, the results only suggest the 'consumption of dairy products should not be discouraged and perhaps even be encouraged in low-income and middle-income countries.' It is not the ultimate seal of approval for recommending whole-fat dairy over its low-fat or skimmed counterparts. Readers should be cautious, and treat this study only as yet another piece of the evidence (albeit a large one) in the literature."

The PURE study was funded from more than 50 sources, including the PHRI, the Heart and Stroke Foundation of Ontario and Canada and the Canadian Institutes of Health Research (CIHR).

Other scientists agreed that there was mounting evidence that dairy products had health benefits in moderation, reports The Guardian. Dr Sarah Berry, senior lecturer in nutritional sciences at King’s College London, said the concern about dairy had been the result of the “traditional reductionist and single nutrient, single biomarker approach to making associations between foods and health”. It is important to have guidance on the foods we eat, not the individual nutrients we consume, she said.

Professor Ian Givens, of the Institute for Food, Nutrition and Health at the University of Reading, agreed on the need for food-based guidance. “The findings back up other evidence that “there is not one simple relationship between consuming saturated fat and risk of CVD – the food vehicle delivering the fat can have a key influence. The results of this study suggest that saturated fat from whole-fat milk, yoghurt and hard cheese has very limited if any impact on CVD risk,” he said.

Professor Nita Forouhi of the MRC Epidemiology Unit at the University of Cambridge, said the study laid to rest the “widespread misconception” that eating dairy is bad for heart health. “The key question of whether we should consume low-fat or full-fat dairy is not really fully answered by this research due to low intakes of low-fat dairy in much of the world except Europe and North America,” she said. For now, current guidelines should be followed, but the study would open up the debate.

Public Health England said UK guidance would not change. “This study suggests dairy consumption may reduce the risk of cardiovascular disease in low- and middle-income countries, but this was not the case for those with higher incomes comparable to the UK,” said Dr Alison Tedstone, chief nutritionist at PHE.

“Dairy plays a role in a healthy balanced diet, but too much can lead to high levels of saturated fat and salt – the UK’s Eatwell Guide recommends choosing lower fat options to help prevent heart disease.”

Abstract
Background: Dietary guidelines recommend minimising consumption of whole-fat dairy products, as they are a source of saturated fats and presumed to adversely affect blood lipids and increase cardiovascular disease and mortality. Evidence for this contention is sparse and few data for the effects of dairy consumption on health are available from low-income and middle-income countries. Therefore, we aimed to assess the associations between total dairy and specific types of dairy products with mortality and major cardiovascular disease.
Methods: The Prospective Urban Rural Epidemiology (PURE) study is a large multinational cohort study of individuals aged 35–70 years enrolled from 21 countries in five continents. Dietary intakes of dairy products for 136 384 individuals were recorded using country-specific validated food frequency questionnaires. Dairy products comprised milk, yoghurt, and cheese. We further grouped these foods into whole-fat and low-fat dairy. The primary outcome was the composite of mortality or major cardiovascular events (defined as death from cardiovascular causes, non-fatal myocardial infarction, stroke, or heart failure). Hazard ratios (HRs) were calculated using multivariable Cox frailty models with random intercepts to account for clustering of participants by centre.
Findings: Between Jan 1, 2003, and July 14, 2018, we recorded 10 567 composite events (deaths [n=6796] or major cardiovascular events [n=5855]) during the 9·1 years of follow-up. Higher intake of total dairy (>2 servings per day compared with no intake) was associated with a lower risk of the composite outcome (HR 0·84, 95% CI 0·75–0·94; p trend=0·0004), total mortality (0·83, 0·72–0·96; p trend=0·0052), non-cardiovascular mortality (0·86, 0·72–1·02; p trend=0·046), cardiovascular mortality (0·77, 0·58–1·01; p trend=0·029), major cardiovascular disease (0·78, 0·67–0·90; p trend=0·0001), and stroke (0·66, 0·53–0·82; p trend=0·0003). No significant association with myocardial infarction was observed (HR 0·89, 95% CI 0·71–1·11; ptrend=0·163). Higher intake (>1 serving vs no intake) of milk (HR 0·90, 95% CI 0·82–0·99; p trend=0·0529) and yogurt (0·86, 0·75–0·99; ptrend=0·0051) was associated with lower risk of the composite outcome, whereas cheese intake was not significantly associated with the composite outcome (0·88, 0·76–1·02; p trend=0·1399). Butter intake was low and was not significantly associated with clinical outcomes (HR 1·09, 95% CI 0·90–1·33; p trend=0·4113).
Interpretation: Dairy consumption was associated with lower risk of mortality and major cardiovascular disease events in a diverse multinational cohort.