Almost 3,000 South African children have died of malnutrition in the past three years and the statistics are unlikely to improve any time soon, the national Department of Health told the National Assembly, in response to a question by the DAʼs Bridget Masango.

In the past three years, 2,818 children under five have died of acute malnutrition in local hospitals: in January and February this year alone, 199 starving children died, reports TimesLIVE.

Most of the deaths are in KwaZulu-Natal, followed by the Eastern Cape and Gauteng.

Additional figures presented by the department, going back five years, underpinned the tragic situation: “There were 3,886 under-five deaths associated with severe acute malnutrition nationally in the past five years as reported in the district health information system,” said spokesperson Foster Mohale.

Experts said families hit hard by the COVID-19 lockdown and poverty are battling to put food on the table, and the situation was likely to get worse as more people sink into poverty, with little sign of relief or economic upturn. 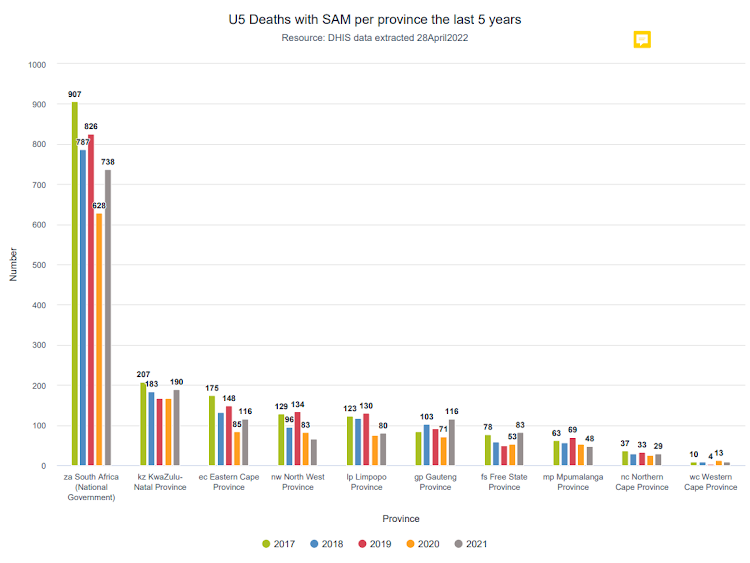 Graph shows the number of children under five who died from severe acute malnutrition.  Image: Department of Health

Mervyn Abrahams, programme co-ordinator at the Pietermaritzburg Economic Justice & Dignity Group, said the annual increments in social grants do not close the inflation gap on food cost increases, a sentiment echoed by Nokuthula Dladla, project manager of Siyaphambili Qondile, a non-profit organisation. “Children are starving – the child-support grant is not enough to feed them,” she said.

‘Rage and grief’ as children die of malnutrition, while govt punts NHI that’s likely to fail