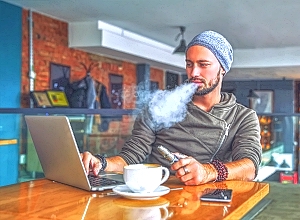 When communicating about the risks of e-cigarettes, we need to be clear about which e-cigarettes, who might be at risk, and who might benefit, writes Jamie Hartmann-Boyce of the University of Oxford in The Conversation. The people who stand to benefit most from vaping – people who smoke – have a right to receive accurate, evidence-based information.

When electronic cigarettes (e-cigarettes) first emerged, they became a popular way for people to quit smoking. But in 2019, a mysterious lung condition emerged that primarily affected young people, particularly those who vaped.

This left many questioning the safety of e-cigarettes.

The condition was named e-cigarettes or vaping use-associated lung injury – Evali for short. The average (median) age of people affected by the condition was 24 years. Symptoms included respiratory complaints, such as a cough, shortness of breath and chest pain, as well as stomach problems, fever, chills and weight loss.

We now know that Evali is not caused by regulated, commercial nicotine e-cigarettes. Rather, the condition has been linked to products sold as THC-containing e-liquids.

Once the risk from vitamin E acetate was identified, cases of Evali declined steeply. But this hasn’t changed many people’s perception of e-cigarettes, with many still concerned about their safety.

Despite statements from Public Health England and the US Centers for Disease Control and Prevention which state that e-cigarettes have the potential to benefit smokers who switch to vaping, concerns about the dangers of e-cigarettes, in part because of Evali, are still discouraging people who smoke from switching.

There are many reasons why misconceptions about the safety of e-cigarettes persist, but undoubtedly it didn’t help that the cause of Evali was confirmed just as COVID began dominating news cycles.

And, until now, many discussions on e-cigarettes have focused on the risks to young non-smokers. This means the potential benefits of e-cigarettes to people who smoke – and those around them – are often ignored.

Also, e-cigarettes are thought to pose fewer risks to bystanders – while second hand smoke from cigarettes kills around 1.2 million people a year.

It’s also worth noting that e-cigarettes typically only contain nicotine, not tobacco, which is found in cigarettes. Although nicotine is an addictive substance, tobacco smoke contains carbon monoxide, tar and toxic chemicals – including benzene, arsenic and formaldehyde.

These substances are known to cause cancer and other heart and lung diseases. The harm from cigarettes largely comes from burning tobacco – not from the nicotine. E-cigarettes deliver nicotine without burning anything.

E-cigarettes haven’t been around for long. They’re very unlikely to be completely harmless, and there is still uncertainty about their longer-term effects.

The liquid and vapour used in e-cigarettes contain some potentially harmful chemicals also found in cigarette smoke, but at lower levels. In addition, there are concerns about the effect of nicotine on adolescent brain development.

Although, as a recent paper pointed out, studies showing that nicotine causes changes in the brain have only been conducted on animals. The authors argue it is still unclear whether the same effect will be seen in humans. There are also worries that e-cigarettes could be another pathway to nicotine addiction – especially if people who would never have started smoking begin vaping.

In reality, because e-cigarettes are relatively new, uncertainty about their longer-term effects will undoubtedly persist for some time.

What we do know is that smoking disproportionately harms people from disadvantaged groups, including those from lower-income groups and people with mental health conditions.

Not only is smoking linked to many harmful diseases, it’s also killed more people than COVID – around 720,000 in the US since March 2020.

The evidence we have so far shows that e-cigarettes can be an effective way to help people successfully quit smoking – and are likely to have far fewer health risks than cigarettes.

* Dr Jamie Hartmann-Boyce is Senior Research Fellow, Departmental Lecturer and Director of the Evidence-Based Healthcare DPhil Programme in the Centre for Evidence-Based Medicine at the University of Oxford.

Article in The Conversation – E-cigarettes: Misconceptions about their dangers may be preventing people from quitting smoking

The health pros and cons of e-cigarettes – Evidence ambivalence