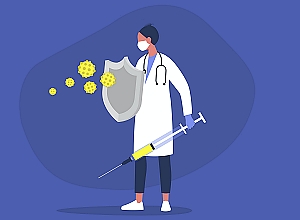 The decision by a Mbombela specialist physician not to accept at his practice patients who are not vaccinated has caused a social media debate between those who want to see more medical practitioners acting forcefully to encourage patient vaccination and those who want him disciplined by the Health Professions Council of SA for unprofessional conduct, writes MedicalBrief.

A specialist physician from Mbombela in Mpumalanga says he is tired of losing people to COVID-19 and will no longer see unvaccinated patients at his practice, reports News24.

A note outside Machiri's practice says that he will not be seeing patients who are not vaccinated against COVID-19. It adds that although he won’t be forcing people to take the vaccine, he will also not allow them to continue dying from an “illness that is preventable”.

Speaking to Cape Talk, Machiri said: “It's compassion fatigue. I will be honest with you; every time I get called up at 1am or 2am to see a patient, they are very ill and I need to make a decision whether to send them to high care or incubate them immediately.”

IN an eNCA interview, he said the decision was primarily motivated by the resistance of long-standing friends and patients, and some people he had known for more than 25 years, who refused to vaccinate.

"There is a group of about a hundred of us, most of whom I have known for years, a support group for HIV, and we have been friends and in touch on a regular basis. Yet when COVID vaccines were made available, only 29 of them vaccinated and the  rest refused. I tried to engage with them and found most of their reasons for refusal were founded on what they see and read on social media, without foundation, or scientific basis."

Machiri said between mid-July and mid-August he lost five of the group of friends to COVID. "Some then got vaccinated but there were 64 who hadn't.  They still refused. And so I put up that notice refusing to treat them or anyone who had not been vaccinated."

The doctor said the issue "has now blown out of proportion, but I am excited it has generated so much debate". He had received a number of support calls from other doctors who are doing exactly the same, he said, refusing to treat patients who have not been vaccinated.

He added that soon after putting up the notice, about 40 patients had had their first dose of the vaccine.

Vaccine hesitancy — one of the world's top 10 health threats

The high price medical whistle-blowers have to pay