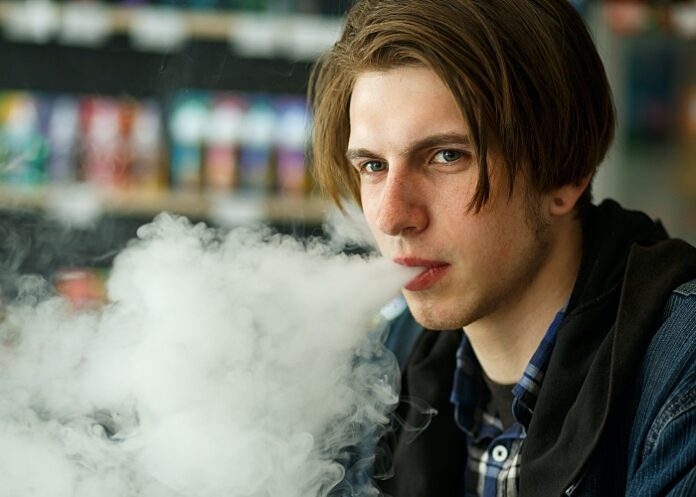 E-cigarette use in England among young adults between 2007 and 2018 did not appear to be associated with substantial increases or decreases in the prevalence of smoking uptake, according to a new study led by University College London researchers.

Several longitudinal observational studies have previously suggested that e-cigarette use may act as a ‘gateway’ towards later use of cigarettes in adolescents, reported UCL News in material published on 11 March 2022.

However, these findings may reflect shared vulnerability in that the same young people who would try e-cigarettes would also more likely later try to smoke cigarettes.

One way to avoid this self-selection bias is to assess the impact at the population level rather than the individual level, using an approach called time series analysis.

Using this method, the current study measured the gateway effect of vaping by looking at the association between prevalence of e-cigarette use among young adults and prevalence of uptake of smoking generally, including among people who have never smoked.

In the new study, published in the journal Addiction, the authors found no statistically significant association between the prevalence of e-cigarette use and ever having smoked regularly (used as an indicator of uptake) among those aged 16 to 24.

Lead author Dr Emma Beard of the UCL Institute of Epidemiology & Health said: “These findings suggest that the large gateway effects reported in previous studies can be ruled out, particularly among those aged 18 to 24. However, we cannot rule out a smaller gateway effect and we did not study younger age groups.

Professor Lion Shahab, also of the UCL Institute of Epidemiology & Health and senior author of the paper, said: “These findings are important given the contrasting advice given by health bodies and governments in different countries. Research to date supports the argument that e-cigarettes are less harmful than tobacco and help smokers to stop smoking.

“Although some harm from vaping relative to never vaping cannot be ruled out, this study suggests there is little evidence of a substantial gateway effect into smoking.”

To interpret their findings further, the authors used Bayes factors and robustness regions. Bayes factors help interpret whether a non-significant finding is evidence of no difference or whether the study was not sensitive enough to detect an effect. Robustness regions identify the size of effect which can be plausibly dismissed.

The analysis plan and data set were pre-registered on the Open Science Framework: https://osf.io/8b7pr.

Association of quarterly prevalence of e-cigarette use with ever regular smoking among young adults in England: a time–series analysis between 2007 and 2018

First published online in the journal Addiction on 9 March 2022.

To assess how changes in the prevalence of e-cigarette use among young adults have been associated with changes in the uptake of smoking in England between 2007 and 2018.

In the primary analysis, prevalence of e-cigarette use was used to predict prevalence of ever regular smoking among those aged 16–24. Sensitivity analyses stratified the sample into those aged 16–17 and 18–24. Bayes’ factors and robustness regions were calculated for non-significant findings [effect size beta coefficient (B) = 3.1].

These findings were able to rule out percentage point increases or decreases in ever regular smoking prevalence greater than 0.31% or less than −0.03% for 16–17-year-olds and 0.01 or −0.08% for 18–24-year-olds for every 1%-point increase in e-cigarette prevalence.

Prevalence of e-cigarette use among the youth population in England does not appear to be associated with substantial increases or decreases in the prevalence of smoking uptake. Small associations cannot be ruled out.

Addiction journal article – Association of quarterly prevalence of e-cigarette use with ever regular smoking among young adults in England: a time–series analysis between 2007 and 2018 (Open access)

E-cigarettes not a gateway to smoking