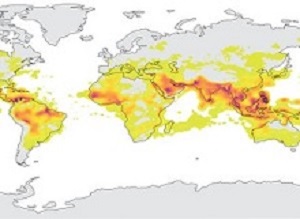 Crop yields are declining. Tropical diseases like dengue fever are showing up in unfamiliar places, including in the US. Tens of millions of people are exposed to extreme heat. The New York Times reports that these are the stark findings of a wide-ranging scientific report that lays out the growing risks of climate change for human health and predicts that cascading hazards could soon face millions more people in rich and poor countries around the world.

The report incorporates the work of 24 academic institutions and UN agencies and follows a major climate assessment issued recently by the US government. The two studies represent the most serious warnings to date that climate change is posing a series of interconnected health risks for the global population.

“We don’t see these health impacts individually,” said Kristie L Ebi, a professor of global health at the University of Washington and one of the authors of the study. “We see them jointly. We see them coming at communities all at the same time.”

Echoing these warnings, the UN secretary general, António Guterres, urged world leaders to swiftly curb greenhouse gas emissions as they had promised under the Paris climate accord three years ago. Nine out of 10 people breathe unsafe air, according to the World Health Organisation, Guterres said. “Meeting the Paris Agreement commitments could save more than a million lives a year,” he said. Cutting emissions from sources like coal-fired power plants and diesel-burning trucks would also result in enormous savings to public health systems, the researchers are quoted in the report as saying. “Doing that now would be good for us, it would be good for our livelihoods and would be good for the planet,” Ebi said.

But as the world continues to warm, the report says the study warned of a number of potential domino effects.

Extreme heat: In 2017, 157m more people were exposed to heat-related health risks than in 2000, the report said. And that was before the scorching summer of 2018. In England and Wales, for instance, over a 15-day period of exceptionally high temperatures this summer, there were 700 “excess deaths” compared to a comparable period in previous years, said Nick Watts, the report’s lead author.

Some of the most vulnerable people are in relatively prosperous countries in Europe and the Eastern Mediterranean region, particularly because these places have large populations of older people living in cities. In both regions, more than 40% of people over the age of 65 were found to be at risk. In the US, the National Climate Assessment found that some of the largest increases in heat-related mortality in future years would occur in the Northeast. By mid-century, there could be 50 to 100 excess deaths per 1m people due to heat in that region, the report said.

Lost labour: Heat makes it hard to work, especially on farms. The report says, according to the study, in 2017, 153bn hours of labour were lost worldwide because of heat, with the largest share in vulnerable rural communities in countries like India. That’s 64bn more lost labour hours than in 2000.

By mid-century, “Prevalence of heatstroke and extreme weather will have redefined global labor and production beyond recognition,” an accompanying editorial warned. “Multiple cities will be uninhabitable and migration patterns will be far beyond those levels already creating pressure worldwide.”

Infectious diseases: The risk of debilitating, often deadly infectious diseases is moving to new places. That’s because even small changes in temperature and rainfall can have a significant effect on where diseases that are spread by bugs and water can take hold.
Habitats for dengue-spreading mosquitoes have expanded significantly, the study concluded. The National Climate Assessment noted that warmer conditions may have helped transmit Zika in the US.

Since 1950, the study is quoted in the report as saying that the cholera bacteria has expanded its reach to the Baltic coastline, and the risk of malaria has spread to higher altitudes in sub-Saharan Africa. “I don’t want people to be surprised when they see cases of what used to be tropical diseases now being found in the US as a result of changing climate,” said Gina McCarthy, a professor of public health at Harvard University and a former administrator of the Environmental Protection Agency during the Obama administration.

Droughts and floods: Extreme droughts and floods are affecting already vulnerable communities, particularly in Southeast Asia and South America. Drought affects agricultural yields, in turn heightening the risk of early death, hunger and childhood malnutrition, according to the study. With drought often comes more dust, which can aggravate allergies and asthma and can also accelerate the reproduction of disease-causing fungi in soil, according to the National Climate Assessment. Floods can wash away farmland and homes and spread waterborne diseases.

Food production: Though the world still produces more than enough food to feed itself, rising temperatures and extreme weather events are affecting food production, the report says the study found. Crop yields are diminishing in 30 countries, reversing a trend of rising agricultural productivity and threatening food security around the world and in the US.