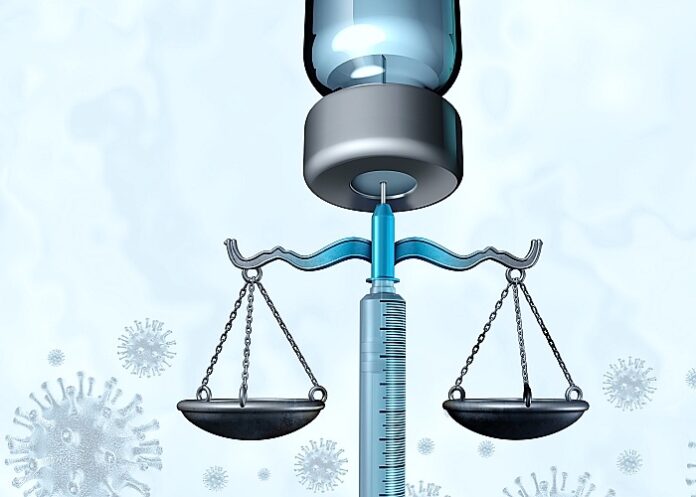 The South African Commission for Gender Equality (CGE) has warned against “trampling on human rights” with mandatory vaccinations and “harsh sanctions” against employees and students, writes MedicalBrief. And as yet another university (Free State) announced a compulsory vaccination policy, the SA Union of Students warned of protests when the academic year resumes and an array of legal challenges have been launched.

The trade union Solidarity this week announced a four court application against mandatory vaccinations, while the newly-formed Universities Alliance SA (Uasa) says it is preparing for a legal challenge. Meanwhile, organised business finds itself divided, with Business Unity South Africa backing the policy, while the CEO of the the National Employers Association of SA this week wrote an emotional “open letter” to President Cyril Ramaphosa over the government’s “sinister” agenda.

The CGE, a Chapter Nine institution established in terms of the Constitution to protect human rights, drew attention to a new study published in Obstetrics & Gynaecology that found COVID-19 vaccines might cause a small change to the menstrual cycle length. It noted that while this change was temporary and scientists believed it not to be clinically significant, “the Commission cautions businesses and various institutions against forcing staff to vaccinate and imposing harsh sanctions on them if they do not,” the CGE said in a statement.

The Commission said it was aware that several companies had introduced mandatory vaccinations in their workplaces, and many more might follow suit. Maintaining public health, reaching herd immunity, and preventing mutating COVID-19 variants are “noble acts” but should not be achieved “by trampling the basic human rights that are enshrined in the Constitution”, said the Commission in a statement, adding that mandatory vaccination mandates did not supersede the Constitution and its provisions.

“The CGE would like to warn that mandatory vaccination mandates do not supersede the South Africa’s Constitution and its provisions. Section 12 (2) of the Constitution states that everyone has the right to bodily and psychological integrity, which includes the right— (a) to make decisions concerning reproduction; (b) to security in and control over their body; and (c) not to be subjected to medical or scientific experiments without their informed consent.

“The Commission is concerned that employees who do not vaccinate may have their contracts terminated by employers if vaccination mandates are allowed to continue without taking the workers’ human rights into consideration. The country’s retail sector employs a high number of young females as cashiers and cleaners, and many of them are not in a position to negotiate with their employers, if they do not wish to vaccinate.

“When scientists establish a connection between Covid-19 vaccinations and women’s reproductive health, such as menstrual cycles, many women may not be comfortable taking vaccines, due to possible long-term effects. These women’s wish to delay vaccinating should be respected in the context of our country’s human rights commitment.”

“The Commission has long taken a commitment to promote and protect the sexual and reproductive health rights of girls, women, and men. It must be acknowledged that COVID-19 is a relatively new pandemic, and that scientists in South Africa and around the world are still working to assess long-term effects of vaccines. This is more critical for women, who have to manage menstrual health, contraception, and sexual reproduction, as part of their reproductive health.”

Cape Times reports that nine universities could be hauled before the courts over their mandatory vaccine policies as the newly-formed Universities Alliance SA (Uasa) is preparing for a legal challenge against the institutions. Uasa said it had sought the best possible legal team to tackle the issue of vaccine mandates, which requires both “scientific and constitutional arguments”. The organisation said plans were under way to take action against the universities.

“We stand for bodily autonomy, individual rights, and freedom of choice, and maintain that neither education nor employment should be denied on the basis of an individual’s choice to refuse medical treatments or prophylactics. Uasa is the realisation of its directors’ vision of a united front to oppose overreaching, amoral and illogical vaccine mandates,” the directors said.

Student Union of SA spokesperson Asive Dlanjwa said while they were in favour of all students getting vaccinated, they were opposed to students being “forced” to vaccinate.

“They must choose and decide on whether they want to get vaccinated or not. There is enough evidence that the vaccine works and it is effective against the variants, therefore let that science be used to persuade students, let them not to be forced to vaccinate and lastly, even the government has not taken the posture of forcing citizens to vaccinate, therefore we do not expect that any public institution will begin to force students to vaccinate,” Dlanjwa said.

Business Day reports that with the University of the Free State (UFS) being the latest tertiary institution to introduce a mandatory vaccine policy, fears about job losses for the unvaccinated have been raised. However, Higher Education Minister Blade Nzimande, in a written reply to a question from the EFF on the UFS decision, said that  the universityʼs policy was “accommodating, and provides students and staff with an option to apply for an exemption through a structured process”.

He suggested that those who are not vaccinated be accommodated in separate offices while others could indefinitely work from home.

“The policy generally has the support of staff through consultation with stakeholder unions. A few staff have indicated they will not vaccinate, and we believe they will apply for exemptions,” Nzimande said.

For personnel such as medical staff required to train students in laboratories, cleaners, gardeners, and student support staff in student affairs, residences and financial aid offices, who would be unable perform duties without physically being on campus, Nzimande said: “We will continuously engage on the best options for them to be able to do their duties within the Occupational Health and Safety Act.”

He acknowledged, however, that unvaccinated students might face more difficulties than university staff, adding that group work and teaching were “of better quality when done in person”.

Volksblad reports that an organisation named Free State of Choice and trade union Solidarity have launched separate applications against the University of the Free State. The university’s recently adopted vaccine policy is that nobody may enter its campuses without being vaccinated or producing a current negative COVID-19 test or having an exemption against vaccination for religious or health reasons. The policy is set to be implemented from 14 February.

Solidarity’s Dirk Hermann says they initiated the urgent litigation to get legal clarity. “Employers do as they please. One of the more shocking examples is how some employers apparently abuse the pandemic and vaccines as excuses to retrench personnel without following the correct procedure.” He said vaccine mandates were counter-productive since they created resistance and eroded trust.

NEASA chief executive Gerhard Papenfus, meanwhile, has written an open letter to President Cyril Ramaphosa, criticising the government's stance on mandatory vaccines. The National Employers Association of South Africa boss wrote that the government’s persistence on the issue of mandatory vaccination “has become the subject of much speculation and many are convinced your motivation in driving this narrative is not entirely bona fide”, and that “something sinister” was going on.

Papenfus claimed that “generally, COVID-19 vaccines have not been proven to provide any benefit to the community they are intended to serve”. In his letter, he accused the president of ignoring the fact that “vaccines damage and weaken the system” and that “most South Africans were already immune to COVID-19”.

BusinessTech however, reports that in an interview on radio station Cape Talk, Cas Coovadia, Business Unity South Africa (Busa) chief executive, said that if an employee does not want to be vaccinated, companies are entitled to demand negative COVID-19 tests from them on a regular basis. Coovadia said these options are detailed in the Department of Employment and Labour’s directive on vaccination in the workplace (published in June 2021).

Coovadia said Busa was pursuing a declaratory order from the courts on mandatory vaccinations, which would provide legal certainty,.

South African Breweries (SAB) is the latest major company to consider the introduction of a mandatory COVID-19 vaccination policy for staff in SA, but it is unlikely to be the last. The company would begin a consultation process this month, with a final decision on mandatory vaccines to be made in “due course”.