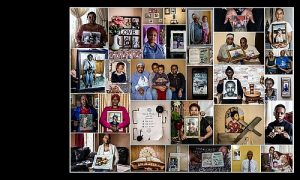 The Life Esidimeni inquest that will decide if anybody can be held criminally responsible for the deaths of 144 mental health patients while in the care of ill-equipped NGOs has started in the Pretoria High Court. After five years of failing to take disciplinary steps against health care professionals found by the Moseneke Inquiry to be responsible, it will ratchet the pressure on the Health Professions Council of SA. and the SA Nursing Council to finally act.

Similarly, the National Prosecuting Authority (NPA) was probing 45 criminal cases related to the tragedy. It committed to complete this by August 2018 but failed to do so.

SANC this week told City Press that steps had still not been taken against Dr Makgabo Manamela, then director of mental health at Gauteng Health, her then deputy, Hannah Jacobus, and Dumi Masondo, former chairperson of the Gauteng review board.

Nor has the HPCSA yet suspended Dr Barney Selebano, who was then head of Gauteng Health. His first hearing before the HPCSA was scheduled for September 2018. Selebano is still registered with the HPCSA and can practise.

Gauteng Health confirmed that Selebano and Jacobus had retired and received their full pension payments. Jacobus worked at the department until her retirement.

Christopher Tsatsawane, head of corporate affairs at the HPCSA, told City Press that the case against Selebano had been postponed due to the current level 4 lockdown, but also failed to explain why the matter had been delayed for years.

The then Gauteng Health MEC Qedani Mahlangu, as well as Selebano and Manamela, all resigned in 2017, around the time that the health ombudsman, Professor Malegapuru Makgoba, released his report in which he recommended that those he called the “architects” of the tragedy and everyone involved in it be suspended and investigated by their professional oversight bodies

“Quick action against such employees is important for government. That’s why we’re currently working on the process,” said SANC CEO Sizeni Mchunu in response to City Press’ query. She did not explain why the “quick action” had still not taken place – four years after the recommendation.

The Life Esidimeni tragedy stunned South Africa and the world, and what transpired is well known. In 2015, apparently with financial savings in mind, Gauteng Health decided to move patients out of the care centre and into unlicensed NGOs across the province.

The plan was poorly conceived and chaotically executed. In all, some 2,000 mental health patients were shifted – sometimes in open bakkies, and despite court applications challenging the move – to care centres that were not equipped to look after mental patients. Families were not informed, and patient records were lost or damaged.

From late 2015, there were reports of patient deaths, many due to neglect. By September 2016, 77 patients were known to have died and there was a growing public outcry.

The Health Ombud recommended that the families be compensated and that an alternative dispute resolution process be held.

In 2018 retired Deputy Chief Justice Dikgang Moseneke chaired the Life Esidimeni arbitration, which awarded compensation to the families of patients who had died. This week’s inquest was prompted by that arbitration, as well as unceasing advocacy by Life Esidimeni families and the South African Depression and Anxiety Group (SADAG).

The National Prosecuting Authority finally launched its inquest into the 144 Life Esidimeni deaths, on Monday. A key task is to find out who should be held  responsible for the deaths, and whether there is sufficient evidence for a criminal prosecution. The inquest is presided over by Judge Mmonoa Teffo of the Pretoria High Court, via virtual proceedings.

In its submission SECTION27, a public interest law centre, asked the inquest to rule that Mahlangu, Selebano and Manamela were responsible for the 144 deaths.

The families, SADAG and SECTION27 are being represented by advocate Adila Hassim. She asked Judge Teffo to accept the findings of the Moseneke arbitration.

She highlighted key findings from the arbitration. The deaths were caused “unlawfully and negligently” by government employees. Officials moved the patients despite warnings that they would be put at risk. The NGOs were incapable of providing the necessary care for mental health patients and officials knew this. There was failure to act after deaths occurred.

On all accounts, Hassim said, MEC Mahlangu led the project to move the patients en masse from Life Esidimeni. She forged ahead despite being told of the dangers to patients by the clinical heads of specialised psychiatric hospitals and academic departments and the SA Society of Psychiatrists. She visited the NGOs and saw their parlous conditions.

Hassim said a prima facie case would also be established against the owners of at least two NGOs, Ethel Ncube of Precious Angels and Dorothy Franks of Anchor.

The first witness was Cassey Chambers, operations director at SADAG. She described nightmarish experiences with Gauteng Health officials, who ignored concerns submitted in meetings and in writing about the department’s plan to move the mental health patients. Fears about treatment of the patients were “shot down”.

She told the inquest: “The dates were wrong, the NGOs hadn’t been assessed or identified, even just the figures of patients were changing all the time”.

Gauteng Health’s plan was to, in just one month, identify and renovate buildings where patients would be moved to, even though most of the buildings were condemned. Most of the facilities to which the patients were transferred were simply not able to handle them.

There was no communication with families regarding where their loved ones would be going. Family members reported that patients were not receiving medication. Patients went hungry, some had to share medication, and they did not have adequate clothing. In some cases the NGOs did not even have a record of the patients placed with them.

Dr Morgan Mkhatshwa, former MD of Life Esidimeni, told the inquest that the hospital group had warned the department on numerous occasions that moving mental health patients to NGOs might be a death sentence.

It did not want a repeat of a tragedy in 2007, when Gauteng Health moved 15 children from the Life Health Baneng Care Centre to an NGO on a trial basis. Two of the children died, and others who were returned to Life Esidimeni were severely dehydrated and malnourished.

Mkhatshwa said: “We wanted to be part of the accreditation so we could understand where the mental healthcare [patients] were going. We wanted to be able to match the [patient] to the right facility. We kept on warning the officials.”

The officials were told that costs could be kept low and care quality high because of the scale of the Life Health group, News24 reported. This would not be possible for the NGOs. Further, many of the patients needed someone with a clinical eye to care for them.

Before the decision to terminate the contract, the health department had never complained about the quality of care patients received ta Life Esidimeni. The hospital told Gauteng Health that the NGOs would not have sufficient resources to care for patients. This was indeed the case. The patients died of hunger, neglect and dehydration.

Mkhatshwa told the inquest that Manamela, as director of mental health, and her team had expressed frustration about political pressure placed on them to move patients from Life Esidimeni, and unhappiness about the move.

Giving evidence on Monday, Mahlangu – represented by top advocate Lawrence Hodes SC – laid the blame for the tragedy on Premier David Makhura. Hodes said Mahlangu had acted on advice from medical experts at Gauteng Health, and that the ultimate decision to transfer the patients was taken by the premier, The Star reported.

On Wednesday, the inquest ground to a halt. Despite months of preparations and planning, government had not properly prepared independent legal representations for the three officials who could be facing criminal prosecutions. Proceedings will resume on Friday 23 July.