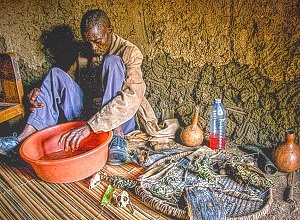 Traditional healers trained to administer HIV testing and counselling to their patients significantly increased the proportion of patients receiving testing and linkage to care in rural Uganda.

In a cluster-randomised trial of 500 patients, 100% of those randomised to receive HIV counselling and testing from traditional healers consented to screening and were tested by their healer versus only 23% of those who were directed by their healer to go to a medical clinic for testing, reported Dr Radhika Sundararajan, of Weill Cornell Medicine in New York City.

Moreover, 10 participants in the intervention arm tested positive for HIV and seven of those were linked to care versus zero in the control arm.

During a presentation at the virtual Conference on Retroviruses and Opportunistic Infections (CROI 2021), Sundararajan noted that traditional healers are frequently preferred for medical care in sub-Saharan Africa, as they are considered more accessible than medical clinics.

Traditional healers do not usually discuss or offer HIV testing, but 80% of individuals in sub-Saharan Africa visit these healers in addition to or instead of medical clinics; 34% of adults in Uganda receiving care from traditional healers had not been tested for HIV in the last 12 months, contrary to the country's guidelines recommending all sexually active adults be tested annually.

"Some have proposed cooperating with traditional healers may be an avenue to increase uptake of HIV testing among populations who may be difficult to reach," Sundararajan said.

Her group performed a cluster-randomized trial in a rural region of Uganda with an HIV prevalence of 7.9%, higher than the national average of 5%. They trained all four traditional healer specialties — herbalists, spiritualists, birth attendants, and bone setters – in HIV counselling, including administering a point-of-care HIV test.

There was a 4.4-fold increased likelihood of receiving an HIV test among those randomised to the intervention group compared with controls, with a difference in testing uptake rates of 77.2% (95% CI 72.8-81.6%). Specifically, only 57 of 250 control patients received an HIV test compared with all intervention patients.