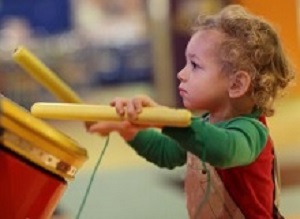 Music education has been decimated in schools around the globe, due to competition with academic subjects and an increasing lack of funding. These days, the opportunity to learn an instrument is seen as more of a luxury than a necessary part of education.

"Despite indications that music has beneficial effects on cognition, music is disappearing from general education curricula," says Dr Artur Jaschke, from VU University of Amsterdam, who led the study with Dr Henkjan Honing and Dr Erik Scherder. "This inspired us to initiate a long-term study on the possible effects of music education on cognitive skills that may underlie academic achievement."

The researchers conducted the study with 147 children across multiple Dutch schools, using a structured musical method developed by the Ministry of Research and Education in the Netherlands together with an expert centre for arts education. All schools followed the regular primary school curriculum, with some providing supplementary music or visual arts classes. In these, the children were given both theoretical and practical lessons.

After 2.5 years, the children's academic performance was assessed, as well as various cognitive skills including planning, inhibition and memory skills.

The researchers hope their work will contribute to highlighting the importance of the music and arts in human culture and cognitive development.

"Both music and arts classes are supposed to be applied throughout all Dutch primary schools by the year 2020," says Jaschke. "But considering our results, we hope that this study will support political developments to reintegrate music and arts education into schools around the world."

Abstract
Background: Research on the effects of music education on cognitive abilities has generated increasing interest across the scientific community. Nonetheless, longitudinal studies investigating the effects of structured music education on cognitive sub-functions are still rare. Prime candidates for investigating a relationship between academic achievement and music education appear to be executive functions such as planning, working memory, and inhibition.
Methods: One hundred and forty-seven primary school children, Mage = 6.4 years, SD = 0.65 were followed for 2.5 years. Participants were randomized into four groups: two music intervention groups, one active visual arts group, and a no arts control group. Neuropsychological tests assessed verbal intelligence and executive functions. Additionally, a national pupil monitor provided data on academic performance.
Results: Children in the visual arts group perform better on visuospatial memory tasks as compared to the three other conditions. However, the test scores on inhibition, planning and verbal intelligence increased significantly in the two music groups over time as compared to the visual art and no arts controls. Mediation analysis with executive functions and verbal IQ as mediator for academic performance have shown a possible far transfer effect from executive sub-function to academic performance scores.
Discussion: The present results indicate a positive influence of long-term music education on cognitive abilities such as inhibition and planning. Of note, following a two-and-a-half year long visual arts program significantly improves scores on a visuospatial memory task. All results combined, this study supports a far transfer effect from music education to academic achievement mediated by executive sub-functions.