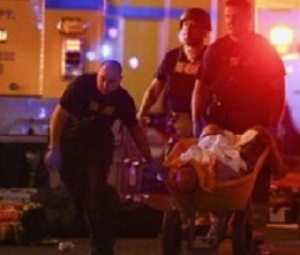 What the recent Las Vegas shooting showed, trauma experts said, is that nascent efforts to teach and encourage the public to help the wounded in mass casualty emergencies should be expanded, writes The New York Times.

Volunteers combed the grounds for survivors and carried out the injured. Strangers used belts as makeshift tourniquets to stanch bleeding, and then others sped the wounded to hospitals in the back seats of cars and the beds of pickup trucks.

The report says these rescue efforts took place before the county’s emergency medical crews, waylaid by fleeing concertgoers, reached the grassy field, an estimated half-hour or more after the shooting began. When they did arrive, the local fire chief said in an interview, only the dead remained. “Everybody was treating patients and trying to get there,” Chief Gregory Cassell of the Clark County Fire Department, said of his personnel. “They just couldn’t.”

The report says experiences in Las Vegas have implications for the nation. Emergency medical services have changed how they respond to mass attacks, charging into insecure areas and immediately helping the injured rather than standing back. Still, every minute counts, and bystanders can play a critical role in saving lives, as shown in the aftermath to the shooting on 1 October outside the Mandalay Bay Resort and Casino.

“The city functioned as a trauma centre,” said Dr Sean Dort, a surgeon at Dignity Health-St Rose Dominican Hospital’s Siena campus in nearby Henderson, Nevada. “What really makes this unique is the volume.”

“Time is the most critical factor,” said Dr Eric Goralnick, medical director of emergency preparedness at Brigham and Women’s Hospital in Boston, one of several trauma centres that were much closer to the Boston Marathon bombings in 2013 than the closest hospitals happened to be in Las Vegas. “People would talk about the golden hour. Really, what we’re talking about are the golden minutes.”

The report says several programmes have been started in the US to train more people to stop bleeding, to add to those who pick up knowledge in the military or in scouting programs and the like. But Goralnick and others are still exploring the most effective and lasting ways to turn people without medical backgrounds into capable responders. Researchers are finding that people may need prompting or training to use tourniquets effectively, even when instructional materials are present with them.

“My observation is that the civilian sector is where the military was in this topic area in the early 2000s,” said Dr Todd Rasmussen, an Air Force colonel and associate dean at the Uniformed Services University of Health Sciences in Bethesda, Maryland, which maintains a website with information on how to stop bleeding.

The report says roughly half of the 58 victims killed in the Las Vegas mass shooting died before reaching a hospital, based on mortality counts released by local medical centres. In the Iraq and Afghanistan wars, there were also many pre-hospital fatalities. “It’s convenient to put many of these deaths in the damn-shame category – ‘Well, we couldn’t have done anything anyway,’” Rasmussen said. While that reaction is understandable, he said, it was important to study what really caused the deaths, and whether any of the injuries might have been survivable.

In studying autopsies of service members killed in the early 2000s, Rasmussen and his colleagues found that many had life-ending wounds that could not be fixed. But some had wounds that could have been successfully repaired by surgeons if the patient had not already lost so much blood, he said. The report says because of that finding, the military began training regular service members to stop bleeding, equipping them with individual first aid kits, which contain optimized tourniquets and wound dressings. Researchers have shown that lives have been saved as a consequence.

“We think the American public can, if they can use some of these same techniques, save lives in the same way non-medical soldiers can save lives,” said Dr Craig Goolsby, deputy director of the National Centre for Disaster Medicine & Public Health at the Uniformed Services University.

The impression in Las Vegas is that they did just that. “Some of our patients were saved by bystanders,” said Dr Deborah A Kuhls, a professor of surgery at the University of Nevada, Las Vegas School of Medicine and the medical director of the trauma intensive care unit at University Medical Centre of Southern Nevada. “One had put a belt on his thigh, and it probably saved his life. There was a lot of bleeding on the scene.”

The report says in Las Vegas, several factors impeded the arrival of emergency medical workers at the scene of the shooting itself. Confusion abounded. One fire crew that happened to be passing by during the first few minutes saw people running from the festival and heard what sounded like gunfire. “You got reports of anything?” a member of the fire crew, Captain Ken O’Shaughnessy of Engine 11, asked a dispatcher over the radio. “That’s a negative, sir,” he was told. Three minutes later, the dispatcher confirmed that there was an active call.

Members of that crew remained nearby and later assisted injured concertgoers. “From what it sounds like talking to them, they didn’t identify the hot zone because they didn’t know where it was,” said Cassell, the fire chief. “They just knew they had dozens and dozens of critical patients.”

More than 10 minutes after the shooting began, a battalion chief advised firefighters to “stage at a distance” and put on protective vests and helmets as he tried to understand the situation and make contact with a police lieutenant on the scene. The battalion chief radioed in seven minutes later that there were reports of gunfire at both the concert grounds and the Mandalay Bay across the street. “We can’t approach it yet,” he said.

The report says the injured were already fleeing and being carried out in several directions. “Those crews making their way to the concert venue were met at every turn by patients in the streets,” Cassell said. The fire department helped establish several assembly points, and ultimately, about 160 firefighters and emergency medical workers from departments in the region went to the scene.

Inside the nearly empty concert grounds after the shooting stopped, some volunteers remained, roaming among the fallen near the stage, checking pulses and finding some of them unconscious but still breathing.

“EMTs, any EMTs?” one man shouted to no avail as he recorded video. Then the lights cut out, and everything fell into darkness.

In another video posted by The Las Vegas Review-Journal, an injured man could be heard immediately after the shooting asking where the ambulances were. “They’re not going to come this way,” a policeman on a part of Las Vegas Boulevard north of the hotel and the concert site said to Raymond Page, a Clark County employee who was assisting the injured man. “Take him east,” the officer said. A few feet away, another police officer helped adjust the injured man’s tourniquet.

The report says over time, calls to 911 from other hotels where the injured had fled and taken shelter created the impression that shootings might be occurring in multiple locations. That “took away additional resources that were coming in,” Cassell said. Ultimately, he said, there were 60 reports from hotels that had to be checked.

Tactical rescue teams of police and firefighters assembled, put on the protective gear their departments had recently bought with the help of federal grants, and entered the hotels to bring out the victims as they were trained to do, based on lessons from mass shootings at Columbine High School and in Aurora, Colorado. Captain Joe Geeb of Clark County Engine Company 33 was assigned to the Tropicana Hotel, where there were several lightly wounded patients. He said in an interview that he was using his bulletproof vest and helmet for the first time on a real call.

The report says by the time fire crews made it inside the concert grounds, they found only bodies. “Everybody that was alive or salvageable was dragged outside the venue by bystanders, all the great Samaritans,” Cassell said.

Those aiding the injured included off-duty firefighters, military medics, and nurses who happened to be attending the concert. Also assisting was Community Ambulance, a private company hired for the event whose 16 emergency medical technicians and paramedics had expected to treat concertgoers for sun exposure and intoxication.

Ultimately, fire department and private ambulances transported 200 patients to hospitals, according to estimates by fire officials. That means that the majority of the injured reached hospitals in private cars, pickup trucks and taxicabs, including patients who were put in those vehicles by firefighters, Cassell said. Representatives of 11 area hospitals said in interviews that they treated a total of 595 patients, although some may have been counted twice if they were transferred between hospitals.

The report says even when emergency medical workers were on the scene, civilians continued to assist. “We had people who were shot holding pressure on other people’s wounds,” said Amber Ratto, a paramedic with American Medical Response and MedicWest, which sent about 120 vehicles and 250 staff members in response to the shooting.