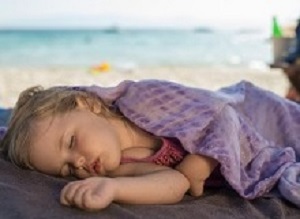 Ask just about any parent whether napping has benefits and you'll likely hear a resounding "yes," particularly for the child's mood, energy levels, and school performance. Now research from the University of Pennsylvania and the University of California Irvine, backs up that parental insight. A study of nearly 3,000 fourth, fifth, and sixth graders ages 10-12 revealed a connection between midday napping and greater happiness, self-control, and grit; fewer behavioural problems; and higher IQ, the latter particularly for the sixth graders. The most robust findings were associated with academic achievement, says Penn neuro-criminologist Adrian Raine, a co-author on the paper.

"Children who napped three or more times per week benefit from a 7.6% increase in academic performance in Grade 6," he says. "How many kids at school would not want their scores to go up by 7.6 points out of 100?"

Sleep deficiency and daytime drowsiness are surprisingly widespread, with drowsiness affecting up to 20% of all children, says lead author on the study Jianghong Liu, a Penn associate professor of nursing and public health. What's more, the negative cognitive, emotional, and physical effects of poor sleep habits are well-established, and yet most previous research has focused on preschool age and younger.

That's partially because in places like the US, napping stops altogether as children get older. In China, however, the practice is embedded into daily life, continuing through elementary and middle school, even into adulthood. So, Liu and Raine, with Penn bio-statistician Rui Feng, University of California Irvine sleep researcher Sara Mednick and others, turned to the China Jintan Cohort Study, established in 2004 to follow participants from toddlerhood through adolescence.

From each of 2,928 children, the researchers collected data about napping frequency and duration once the children hit Grades 4 through 6, as well as outcome data when they reached Grade 6, including psychological measures like grit and happiness and physical measures such as body mass index and glucose levels. They also asked teachers to provide behavioural and academic information about each student. They then analysed associations between each outcome and napping, adjusting for sex, grade, school location, parental education, and nightly time in bed.

It was the first comprehensive study of its kind, Mednick says. "Many lab studies across all ages have demonstrated that naps can show the same magnitude of improvement as a full night of sleep on discrete cognitive tasks. Here, we had the chance to ask real-world, adolescent schoolchildren questions across a wide range of behavioural, academic, social, and physiological measures."

Predictably, she adds, "the more students sleep during the day, the greater the benefit of naps on many of these measures."

Though the findings are correlational, the researchers say they may offer an alternative to the outcry from paediatricians and public health officials for later school start times. "The midday nap is easily implemented, and it costs nothing," says Liu, particularly if accompanied by a slightly later end to the day, to avoid cutting into educational time. "Not only will this help the kids, but it also takes away time for screen use, which is related to a lot of mixed outcomes."

Future directions could look at why, for example, children with better-educated parents nap more than children with less educated parents, or whether, by investigating the influence of culture and personality, nap interventions could be advanced on a global scale. Ideally, a randomized control trial would get at causation questions like whether napping leads to better academic achievement or whether they're linked in some other way. However, none of this is yet in the works.

For now, the researchers say they hope the results of this current study can inform future interventional work that targets adolescent sleepiness.

Abstract
Study Objectives: Poor sleep and daytime sleepiness in children and adolescents have short and long-term consequences on various aspects of health. Midday napping may be a useful strategy to reduce such negative impacts. The effect of habitual napping on a wide spectrum of cognitive, behavioral, psychological, and metabolic outcomes has not been systematically investigated.
Methods: This study characterized midday napping habits in 3819 elementary school children from the China Jintan Cohort Study. In 2011, weekly nap frequency and average duration were collected once from students at grades 4-6. Prior to their completion of elementary school at grade 6 (in 2011-2013 respective to each grade), the following outcomes were collected once: behavioral and academic achievement evaluated by teachers, and self-reported positive psychology measures including grit, self-control, and happiness. IQ tests were conducted on a subgroup. Metabolic indices including body mass index and fasting glucose concentration were measured through physical exams. For the whole sample, we assessed associations between napping and each outcome, adjusted for sex, grade, school location, parental education, and time in bed at night. We also conducted stratified analyses on grade 6 (cross-sectional), grade 4 (2-year gap), and grade 5 (1-year gap) data.
Results: Overall, napping was significantly associated with higher happiness, grit, and self-control, reduced internalizing behavior problem, higher verbal IQs, and better academic achievement, although specific patterns varied across frequency and duration for different outcomes. More limited significant associations were found for decreased externalizing behavior problems, compared to non-nappers, while no significant associations were found for performance IQ and metabolic outcomes.
Conclusions: Results indicate benefits of regular napping across a wide range of adolescent outcomes, including better cognition, better psychological wellness, and reduced emotional/behavioral problems. The current study underscores the need for further large-scale intervention studies to establish causal effects.