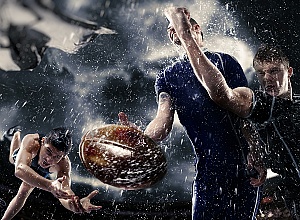 A University of Birmingham-led study of top-flight UK rugby players – carried out in collaboration with the Rugby Football Union (RFU), Premiership Rugby, and Marker Diagnostics – has identified a method of accurately diagnosing concussion using saliva, paving the way for the first non-invasive clinical test for concussion for use in sport and other settings.

Following the team's previous research, which identified that the concentration of specific molecules in saliva changes rapidly after a traumatic brain injury, the researchers embarked on a three-year study in elite rugby to establish if these 'biomarkers' could be used as a diagnostic test for sport-related concussion.

Using DNA sequencing technology in the laboratory at the University of Birmingham, the research team tested these biomarkers in saliva samples from 1,028 professional men's rugby players competing in English rugby's top two leagues – the Premiership and Championship.

The results of SCRUM (Study of Concussion in Rugby Union through MicroRNAs) has for the first time shown that specific salivary biomarkers can be used to indicate if a player has been concussed. Additionally, the research has found these biomarkers provide further insights into the body's response to injury as it evolves from immediately after trauma, to several hours and even days later.

The scientific breakthrough provides a new laboratory-based non-invasive salivary biological concussion test, which could have wide-reaching use and potential to reduce the risk of missing concussions not only in sport – from grassroots to professional levels – but also in wider settings such as military and healthcare.

In community sport, these biomarkers may provide a diagnostic test that is comparable in accuracy to the level of assessment available in a professional sport setting. While, at an elite level of rugby, the concussion test may be used in addition to the existing World Rugby Head Injury Assessment (HIA) protocol.

Marker Diagnostics, a subsidiary of Swiss biotechnology company Marker AG, is in the process of commercialising the patented salivary concussion test as an over-the-counter test for elite male athletes. It has also obtained a CE Mark for test, which has been named MDx.100.

The team now aims to collect further samples from players in two elite men's rugby competitions in order to provide additional data to expand the test and develop its use to guide the prognosis and safe return to play after concussion and to further establish how it will work alongside the HIA process.

The team will present their findings and planned next research steps at the World Rugby Laws and Welfare Symposium to be held later this month.

Meanwhile, Marker Diagnostics and the University of Birmingham are also currently carrying out several additional studies to further validate and expand the test for use in different groups that were not included in the SCRUM study, including women, young athletes and community sports players.

The research is part of the REpetitive COncussion in Sport (ReCoS) research programme being led by the University of Birmingham through the National Institute for Health Research's Surgical Reconstruction and Microbiology Research Centre (NIHR SRMRC) based at University Hospitals Birmingham NHS Foundation Trust (UHB).

First author Dr Valentina Di Pietro, of the University of Birmingham and NIHR SRMRC, said: "Concussion can be difficult to diagnose, particularly in settings such as grass roots sports where evaluation by a specialist clinician is not possible. Consequently, some concussions may go undiagnosed.

"There are also concerns regarding the long-term brain health of those exposed to repeated concussions.

"A non-invasive and accurate diagnostic test using saliva is a real game changer and may provide an invaluable tool to help clinicians diagnose concussions more consistently and accurately.

"In professional sports, this diagnostic tool may be used in addition to current head injury assessment protocols and return to play evaluation to ensure the safety of individuals."

Senior author Antonio Belli, professor of trauma neurosurgery at the University of Birmingham, consultant neurosurgeon at UHB, and director of NIHR SRMRC, added: "Conducting a study in a professional contact sports setting has meant we have been able to collect invaluable data enabling us to make significant advances in our biological knowledge and understanding of concussion and its diagnosis.

"Crucially, the differences in the salivary concentration of these biomarkers are measurable within minutes of injury, which means we can make rapid diagnoses.

"The ability to rapidly diagnose concussion using biomarkers in addition to existing tools solves a major unmet need in the sporting world as well as in military and healthcare settings, particularly in injuries without significant visible symptoms."

"While still a way from having something that can be used in community rugby, it is extremely encouraging to now be able to start to develop a rapid and non-invasive test which could add real value particularly at a grassroots level of the game.

"We would like to thank all the players and clubs who participated in the study and to World Rugby for granting permission for us to extend the duration of the HIA from 10 to 13 minutes in order for the saliva samples to be captured. We wouldn't have been able to do it without this support.

"We will now be working with World Rugby to secure further research options in two elite men's competitions."

Author Dr Matt Cross, head of science and medical operations at Premiership Rugby, said: "We would like to thank our clubs and all of the players for volunteering to be part of this very important research project.

"The findings from the study are clearly promising and highlight the potential for salivary biomarkers to further support clinical decision making and the accurate identification and diagnosis of concussion in a range of different sporting and non-sporting settings.

"Premiership Rugby and the Premiership clubs support a number of player welfare focused research projects, and we are looking forward to continuing to collaborate and support further research in the next phase of this specific project from 2021-22 onwards."

Dr Éanna Falvey, World Rugby chief medical officer, added: "Elite Rugby's Head Injury Assessment process has proven an invaluable tool in the identification of concussion with an accuracy of over 90%, but we are continually evaluating the latest developments in science and technology to identify potential enhancements.

"This study, its rigour and outcomes demonstrates the value in a targeted, scientific approach and reflects rugby's progressive commitment to player welfare."
Tinus Maree, CEO of Marker AG, said: "This ground-breaking validation of the biomarker panel shows that we can use the simple swab collection of saliva to accurately and specifically diagnose concussion.

"It is a biological measure of mild traumatic brain injury and will contribute to a new global standard of care for the injury and a meaningful reduction of the cost and health burden associated with concussion.

"We are grateful to our collaborators, especially to Dr Simon Kemp and the RFU, for their efforts and visionary support of this important work."

The study, fully supported by The Rugby Players' Association, saw the team obtaining saliva samples from male professional players in the top two tiers of England's elite rugby union competition during the 2017-18 and 2018-19 rugby seasons.

Saliva samples were collected pre-season from 1,028 players. They were also collected from 156 of these players during standardised World Rugby head injury assessments (HIAs) at three time points — in-game, post-game, and 36-48 hours post-game. The HIA protocol, used by rugby medical staff, includes a neurological examination, a series of cognitive tests and evaluation of gait and balance to determine if a player has been concussed.

'Control' samples were also collected from 102 uninjured players and 66 players who were removed from the game due to musculoskeletal injuries.

Using samples collected during the 2017-18 season, the team identified a panel of a combination of 14 salivary biomarkers – known as small non-coding RNAs or sncRNAs – that was highly accurate (96%) at identifying concussed players from all other groups. This included players with suspicion of mild traumatic brain injury who had a concussion ruled out after a structured HIA; uninjured controls from the same game; and players who had suffered musculoskeletal injuries.

The panel was prospectively tested during the 2018-19 season, and the research showed it could successfully predict whether players would be positive or negative for concussion via the HIA protocol in 94% of cases.

Study details
Unique diagnostic signatures of concussion in the saliva of male athletes: the Study of Concussion in Rugby Union through MicroRNAs (SCRUM)

Abstract
Objective
To investigate the role of salivary small non-coding RNAs (sncRNAs) in the diagnosis of sport-related concussion.
Methods
Saliva was obtained from male professional players in the top two tiers of England’s elite rugby union competition across two seasons (2017–2019). Samples were collected preseason from 1028 players, and during standardised head injury assessments (HIAs) at three time points (in-game, post-game, and 36–48 hours post-game) from 156 of these. Samples were also collected from controls (102 uninjured players and 66 players sustaining a musculoskeletal injury). Diagnostic sncRNAs were identified with next generation sequencing and validated using quantitative PCR in 702 samples. A predictive logistic regression model was built on 2017–2018 data (training dataset) and prospectively validated the following season (test dataset).
Results
The HIA process confirmed concussion in 106 players (HIA+) and excluded this in 50 (HIA−). 32 sncRNAs were significantly differentially expressed across these two groups, with let-7f-5p showing the highest area under the curve (AUC) at 36–48 hours. Additionally, a combined panel of 14 sncRNAs (let-7a-5p, miR-143-3p, miR-103a-3p, miR-34b-3p, RNU6-7, RNU6-45, Snora57, snoU13.120, tRNA18Arg-CCT, U6-168, U6-428, U6-1249, Uco22cjg1,YRNA_255) could differentiate concussed subjects from all other groups, including players who were HIA− and controls, immediately after the game (AUC 0.91, 95% CI 0.81 to 1) and 36–48 hours later (AUC 0.94, 95% CI 0.86 to 1). When prospectively tested, the panel confirmed high predictive accuracy (AUC 0.96, 95% CI 0.92 to 1 post-game and AUC 0.93, 95% CI 0.86 to 1 at 36–48 hours).
Conclusions
SCRUM, a large prospective observational study of non-invasive concussion biomarkers, has identified unique signatures of concussion in saliva of male athletes diagnosed with concussion.

Study on concussion in rugby inconclusive