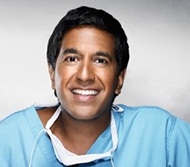 Ethical questions have been raised after a CNN crew covering the Nepalese earthquake filmed its chief medical correspondent perform emergency brain surgery on an eight-year-old girl using a saw and resuscitate a woman mid-air on a helicopter, using a cardiac thump. Dr Sanjay Gupta, the feted neurosurgeon and CNN journalist, who was reporting on the devastating 7.8 magnitude quake, has regularly stepped in to save lives while covering a story for the broadcaster.

The Guardian reports that Gupta is no stranger to carrying out medical procedures in front of the camera. He treated a two-year-old boy on assignment in the Middle East, and examined patients on camera after the 2010 Haiti earthquake.

Connie St Louis, director of the Science Journalism programme at City University in London, is quoted as saying that she was "really, really worried" about the ethics of filming a journalist’s medical intervention. She said: "As a journalist with medical training, do you really need to film the times when you get involved? There's certainly a possible confidentiality issue, as well as the potential for self-promotion. If you film the journalist doing the medical procedure, they become the story. My feeling is, why do it in Nepal when there is no way you could possibly do this in America?"

Several ethics experts have previously raised questions over the conflicting instincts of a physician-journalist. Bob Steele, journalism values scholar at the Poynter Institute, said after the Haiti disaster he had uneasy feelings over how "news organisations at some point appear to be capitalising for promotional reasons on the intervention by journalists".

After the disaster in Haiti, where several medical correspondents treated patients on camera, Tom Linden, professor of medical journalism at the University of North Carolina, proposed that new guidelines should be drawn up. He suggested that physician-journalists prioritise their duty to save lives, but that a reporter who treats a patient should not feature that person on a television report, or even ask for their permission to do so.

In Nepal, the CNN crew filmed surgery on eight-year-old Selena Dohal, who had a fractured skull after a roof collapsed in her home town of Panchkhal, 42km from the capital, Kathmandu. In a separate incident, it emerged that Gupta was again filming in a scenario in which his medical skills were needed when the crew were on an aid flight in Sindhupalchowk, east of the capital.