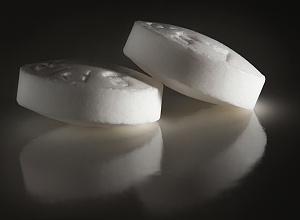 A regular dose of aspirin to reduce the risk of inherited bowel cancer lasts at least 10 years after stopping treatment, research has revealed. The international trial – known as CAPP2 – involved patients with Lynch syndrome from around the world and revealed that two aspirins a day, for an average of two and a half years, reduced the rate of bowel cancer by half.

The study, led by experts at the Universities of Newcastle and Leeds, UK, is a planned double blind 10-year follow-up, supplemented in more than half of recruits with comprehensive national cancer registry data for up to 20 years. The findings of the study further strengthens the National Institute for Health and Care Excellence (NICE) recommendation on taking daily aspirin for those at high risk and supports wider use of aspirin to prevent cancer.

Based on the preliminary five-year data from the CAPP2 trial, NICE recommended that aspirin should be offered for the prevention of bowel cancer in adults with Lynch syndrome.

Professor Sir John Burn, from Newcastle University and Newcastle Hospitals NHS Foundation Trust, who led the research, said the new findings further support this important guidance. He said: "I had an idea 30 years ago that people with a genetic predisposition to colon cancer could help us to test whether aspirin really could reduce the risk of cancer.

"Patients with Lynch syndrome are high risk and this offered statistical power to use cancer as an endpoint – they are like the canaries in the mine who warned the miners that there was gas. It took a long time to start the trial and to recruit enough people in 16 countries, but this study has finally given us an answer.

"Two aspirins a day for a couple of years gives protection that lasts more than 10 years and the statistical analysis has become much stronger with time. For people at high cancer risk, the benefits are clear – aspirin works. Our new international trial, CaPP3, will see if smaller doses work just as well."

The study involved 861 patients with Lynch syndrome, which affects about one in 200 people in the population. These people have a genetic problem with DNA repair, making them at much higher risk of cancers such as bowel and womb.

A group of 427 were randomised to aspirin continuously for two years and 434 were allocated to a placebo and then they were all followed for 10 years. Out of those given two aspirins each day (600mg) there were 18 fewer colon cancers, representing a drop of 42.6%.

When all 163 Lynch syndrome cancers are included in the analysis – such as cancer of the endometrium or womb – there was an overall reduced risk of cancer of 24% in those taking aspirin, or 37% in those who took aspirin for the full two years.

Between 1999 and 2005 participants began either taking two aspirins every day for two years or a placebo.

At the end of the treatment stage in 2007 there was no overall difference between those who had taken aspirin and those who had not. However, the research team anticipated a longer-term effect and designed the study for continued follow-up.

By 2010 there had been 19 new bowel cancers among those who had received aspirin and 34 among those on placebo. The incidence of cancer among the group who had taken aspirin had halved – and the effect began to be seen five years after patients starting taking the aspirin.

Burn said: "Aspirin has a major preventative effect on cancer but this doesn't become apparent until at least four years later. With the help of these dedicated volunteers we have learned something of value to us all.

"Before anyone begins to take aspirin on a regular basis they should consult their doctor first as aspirin is known to bring with it a risk of stomach complaints, including ulcers and bleeding.

"However, if there is a strong family history of cancer then people may want to weigh up the cost and health benefits of taking aspirin for at least two years."

The team are now leading a new international trial, CaPP3, with more than 1,800 people with Lynch syndrome enrolled to look at whether smaller, safer doses of aspirin can be used to help reduce the cancer risk. The research is funded by Cancer Research UK, NIHR, Bayer Pharma AG and the Barbour Foundation.

Abstract
Background: Lynch syndrome is associated with an increased risk of colorectal cancer and with a broader spectrum of cancers, especially endometrial cancer. In 2011, our group reported long-term cancer outcomes (mean follow-up 55·7 months [SD 31·4]) for participants with Lynch syndrome enrolled into a randomised trial of daily aspirin versus placebo. This report completes the planned 10-year follow-up to allow a longer-term assessment of the effect of taking regular aspirin in this high-risk population.
Methods: In the double-blind, randomised CAPP2 trial, 861 patients from 43 international centres worldwide (707 [82%] from Europe, 112 [13%] from Australasia, 38 [4%] from Africa, and four [<1%] from The Americas) with Lynch syndrome were randomly assigned to receive 600 mg aspirin daily or placebo. Cancer outcomes were monitored for at least 10 years from recruitment with English, Finnish, and Welsh participants being monitored for up to 20 years. The primary endpoint was development of colorectal cancer. Analysis was by intention to treat and per protocol. The trial is registered with the ISRCTN registry, number ISRCTN59521990.
Findings: Between January, 1999, and March, 2005, 937 eligible patients with Lynch syndrome, mean age 45 years, commenced treatment, of whom 861 agreed to be randomly assigned to the aspirin group or placebo; 427 (50%) participants received aspirin and 434 (50%) placebo. Participants were followed for a mean of 10 years approximating 8500 person-years. 40 (9%) of 427 participants who received aspirin developed colorectal cancer compared with 58 (13%) of 434 who received placebo. Intention-to-treat Cox proportional hazards analysis revealed a significantly reduced hazard ratio (HR) of 0·65 (95% CI 0·43–0·97; p=0·035) for aspirin versus placebo. Negative binomial regression to account for multiple primary events gave an incidence rate ratio of 0·58 (0·39–0·87; p=0·0085). Per-protocol analyses restricted to 509 who achieved 2 years’ intervention gave an HR of 0·56 (0·34–0·91; p=0·019) and an incidence rate ratio of 0·50 (0·31–0·82; p=0·0057). Non-colorectal Lynch syndrome cancers were reported in 36 participants who received aspirin and 36 participants who received placebo. Intention-to-treat and per-protocol analyses showed no effect. For all Lynch syndrome cancers combined, the intention-to-treat analysis did not reach significance but per-protocol analysis showed significantly reduced overall risk for the aspirin group (HR=0·63, 0·43–0·92; p=0·018). Adverse events during the intervention phase between aspirin and placebo groups were similar, and no significant difference in compliance between intervention groups was observed for participants with complete intervention phase data; details reported previously.
Interpretation: The case for prevention of colorectal cancer with aspirin in Lynch syndrome is supported by our results.