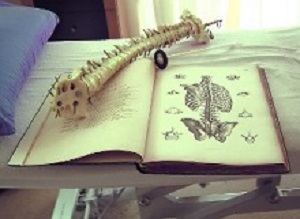 “When you ask most people to name some examples of pseudoscience or quackery, they’ll usually mention homeopathy, or reiki, or herbology,” writes MedicalBrief columnist Alastair Mcalpine. “For some reason, a sheen of respectability surrounds chiropractic…”

McAlpine writes:
“When you ask most people to name some examples of pseudoscience or quackery, they’ll usually mention homeopathy, or reiki, or herbology. Rarely will you hear ‘chiropractic’. For some reason, a sheen of respectability surrounds chiropractic, and chiropractors are often referred to uncritically as ‘doctor’. The truth is, chiropractic is not based on any form of credible science, and is, at best, a painful waste of your hard-earned cash, and at worst, may be outright dangerous.

“Chiropractic was invented by DD Palmer in 1895 when he apparently manipulated the neck of a deaf man and miraculously restored his hearing (the fact that the nerves that allow hearing originate in the brain and not the neck was conveniently swept under the carpet). From this single case, he deduced that all disease was caused by ‘subluxations’ (the displacement of bones), 95% of the time in the spine, and 5% of the time in ‘other areas’.

“From this, chiropractic was born, and it rests on three basic postulates: due to poor posture, or stress, or something, bones are out of place (subluxed); these subluxed bones cause interference in various nerves; and once correctly positioned, the bones no longer cause interference, and the Innate (with a capital ‘I’) or vitalistic life force can be restored, permitting good health

“Already, alarm-bells should be ringing. The concept of an ‘Innate’ or vitalistic life force, that flows through us and permits our body to heal itself, is mystical in origin and has never been scientifically demonstrated. And even if you believe in this force, it seems odd that it can only be transmitted through our nerves, and that tiny displacements of bones can ‘obstruct’ it and cause disease. This has not stopped chiropractic from growing into a $15bn per year industry, with over 77,000 chiropractors operating in the US alone.

“Chiropractic is not taught at most reputable universities – currently only the University of Johannesburg and the Durban University of Technology offer it in South Africa – and chiropractors do not fall under the gambit of the Health Professions Council of South Africa (HPCSA). Rather, they belong to the Allied Health Professions Council of South Africa (AHPCSA), a body of complementary medicine disciplines which includes homeopathy, osteopathy and reflexology (all debunked practices). Although many chiropractors refer to themselves as ‘doctor’, it is unclear how they earned this title and who regulates them.

“Nevertheless, chiropractors can broadly be divided into two main camps: ‘straights’ and ‘mixers’. ‘Straights’ are the minority, and they believe that all disease is due to mal-positioned bones. They reject most of the tenets of modern medicine (like endocrinology and germ theory) and present themselves as ‘purists’ who continue the predominantly metaphysical philosophy of DD Palmer.

“The majority of chiropractors, however, are ‘mixers’, and they acknowledge that ‘subluxed’ bones cannot explain all illness, and so other philosophies, like ‘holism’ (that an individual’s environment has an effect on health) are incorporated. ‘Mixers’ often do not reject modern medicine entirely and may work hand in hand with orthodox medical doctors and other healthcare professionals.

“Chiropractic has a chequered history, and chiropractors faced a serious threat almost immediately, with the invention of the X-Ray (also in 1895). Pesky radiologists began pointing out that the so-called ‘subluxations’ – the defining characteristic of chiropractic – simply were not visible on these films. Chiropractors pondered this, then retorted that they were too small to be seen on plain X-Ray.

“However, in response to sensitive computerised tomography (CT) and magnetic resonance imagining (MRI) scans, which can detect abnormal bony positions to the nearest millimetre, and which still found no evidence of bony displacement, chiropractors were forced to change tack. They claimed that subluxations were actually “a complex of functional and/or structural and/or pathological articular changes that compromise neural integrity and may influence organ system and general health.” In other words, the subluxations were ‘functional’ and not necessarily ‘anatomical’. Much as we can’t ‘see’ a migraine, we can’t ‘see’ subluxations either, they said. Take that, critics!

“Like other pseudoscientists, the exact volume of quackery varies between chiropractors. Some keep their claims limited to the relief of back or muscle pain (more on that later). On the other end of the spectrum are those who say they are able to cure non-musculoskeletal illness, like asthma, or colic in babies, or depression. There’s also a fair degree of overlap with other pseudoscientific disciplines, like the thoroughly debunked field of ‘applied kinesiology’ (not to be confused with ‘kinesiology’, this bizarre branch of alternative medicine posits that substances or objects placed within a subject’s ‘energy field’ can affect the subject’s balance or strength. You’ve seen the ads on TV).

“Chiropractic manipulations vary, but generally they are based on the concept of taking a joint past its usual range, often with a ‘dynamic thrust’, which is a sudden and forceful push to align the subluxed bone. This often causes the ‘crack’ that many report hearing when being manipulated. Chiropractors say that this signals a ‘neural discharge from paraspinal muscles’; the rest of us say that this is the plaintive cry of your body after being unnaturally crunched.

“So, it’s clear that the theory behind chiropractic is highly, highly suspect. But that doesn’t necessarily mean it is ineffective. What exactly does the evidence say?

“Most chiropractors limit themselves to spinal manipulation therapy (SMT). And since most people go to see them for musculoskeletal issues like lower back pain, let’s take a look at that first. There is some evidence that SMT is mildly effective for some patients with lower back pain, but that it is not superior to other treatments, or medication. There is controversial, and much lesser quality, evidence that cervical manipulation may help with headaches and neck pain, but this is far from proven. There is absolutely no evidence that chiropractic has any beneficial effect on non-musculoskeletal conditions like asthma and colic.

“And while serious adverse events after chiropractic manipulation are rare, 33-61% of patients report pain and stiffness in the days after treatment, and both strokes and vertebral artery tears have been described in adults after SMT.

“Some chiropractors claim that due to trauma to a baby’s neck during the birth process, spinal manipulation is necessary to correct the defects. And while the manipulations themselves are often comically gentle, there is also absolutely no evidence that babies or children should have their spines or necks manipulated to promote or maintain health, and some horror stories have emerged about children who have been treated by chiropractors. In 2013, Australian paediatrician Chris Pappas managed a 4-month old infant whose neck was broken by a chiropractor who was attempting to correct the generally benign condition of torticollis.

“There is also a troubling association between chiropractors and anti-vaccination sentiment. While by no means unanimous, many chiropractors are opposed to vaccination, believing that since disease is caused by spinal defects, vaccines are at best ineffective, and at worst, hazardous and poisonous. A 1995 survey in America found that nearly a third of chiropractors advocated against their patients being vaccinated, and while the Canadian Chiropractic Association promotes their administration, 27% of Canadian chiropractors didn’t vaccinate their own kids.

“So, what we have in chiropractic is a form of complementary medicine whose origins are located in a single man and his mistaken belief that displaced bones cause all illness. It is tied to bizarre and unproven metaphysical ideas like the concept of the ‘Innate’ vitalistic life force, and it relies on correcting non-existent defects in bones through forceful manipulations that, at best, provide mild relief for lower back pain, and at worst, will tear your arteries.

“The truth is, for musculoskeletal issues, the people to see are physiotherapists or orthopaedic surgeons, not chiropractors. It’s time we stopped giving chiropractors such latitude and called chiropractic what it is: pseudoscience of the highest order.”

Other Digital Clubbing columns by McAlpine:

Big Pharma and naturopathy — ‘unholy allies’ in the supplementation scam McAlpine: Noakes spread dangerous and untrue information about vaccines Aided by the likes of Noakes, anti-vaxxers are causing real damage The simple but profound values of dying children in their final days Less lore and more science, please

Intermittent fasting: From Pythagoras to Fung