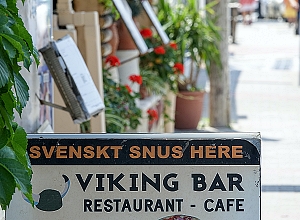 A powerful example of the harm reduction potential of alternative tobacco products comes from Sweden, where over the past 50 years men have switched from smoking cigarettes to sucking tobacco pouches called snus, writes Karen MacGregor for MedicalBrief. There have been dramatic declines in cancers linked to smoking, and in cardiovascular disease.

“We have very good evidence that harm reduction is operating and is contributing to less death and disease from tobacco,” said Swedish scientist and consultant Dr Karl Fagerström at Addiction Conference 2021, a virtual event hosted from 21 to 23 July by SANCA – the South African National Council on Alcoholism and Drug Dependence.

He was one of several speakers in a Tobacco Harm Reduction Symposium moderated by Dr Kgosi Letlape, a physician and president of the Africa Harm Reduction Alliance.

Fagerstrom is a clinician and researcher who worked on nicotine replacement products for some 15 years, with the aim of helping smokers to quit. From 1997 he ran a research clinic studying drugs that treat nicotine dependence. Currently he leads Fagerstrom Consulting. In 1999 the World Health Organization (WHO) awarded him a medal for outstanding work in tobacco control.

A founding member of the Society for Research on Nicotine and Tobacco, Fagerstrom was deputy editor of the journal Nicotine & Tobacco Research for a decade to 2017 and has authored 180 publications. He currently focusses on understanding positive effects of nicotine and reducing exposure to tobacco toxins among people who cannot give up smoking.

A lot of harm to be reduced

Nicotine and tobacco is an ideal area for harm reduction, Fagerström pointed out, because there is so much harm caused by smoking. “So there is a lot that can be reduced.”

Secondly, tobacco is used largely because of nicotine – but nicotine is not the main hazard in cigarettes, the smoke is. Thus, using alternative products, nicotine use may continue without the deadly harm caused by cigarette smoke.

The notion of tobacco harm reduction has been validated by the United States Food and Drug Administration (FDA), which controls tobacco products.

In March 2018 then FDA Commissioner Dr Scott Gottlieb said in a statement “that nicotine, while highly addictive, is delivered through products on a continuum of risk, and that in order to successfully address cigarette addiction, we must make it possible for current adult smokers who still seek nicotine to get it from alternative and less harmful sources”.

The case of Sweden

Fagerström said that from the 1970s, when it became widely known that smoking was very harmful, cigarette smoking in Sweden started to decline while use of snus increased. “Today snus is the predominant habit of using tobacco in Sweden,” he told the symposium.

The same thing happened in neighbouring Norway among men, and among females in Sweden, but much later – from around 2000. Total tobacco use has dropped during this period, he added, so the use of snus has not increased total tobacco use.

In Nordic countries, snus – snuff in English – is moist tobacco usually contained in pouches that are placed between the gum and the upper lip, and kept there while nicotine is absorbed.

Today in Sweden, about 5% of men smoke while 20% use snus and about 1% use e-cigarettes. So altogether, 25% to 26% of men use nicotine in some form, and this percentage is similar to the average for the European Union.

Where there is a huge difference, is in tobacco’s contribution to mortality in Sweden compared to the rest of the EU.

Fagerström highlighted recent WHO data on tobacco and mortality. For lung cancer, the average number of deaths for the EU was 220 per 100,000 people. The figure was nearly 400 per 100,000 in the country with the highest proportion of lung cancer deaths – but for Sweden the proportion was 87, by far the lowest in the EU.

The story is the same for other cancers – 105 per 100,000 is the EU average against 36 for Sweden, which is again the lowest for the region – and for cardiovascular disease.

Looking at all causes of death related to tobacco, the estimate is 550 per 100,000 on average in Europe, against 378 for Sweden, “which is clearly an outlier and much lower than the second lowest country”, said Fagerström.

Sweden is a good example of how less harmful it is to obtain nicotine through snus than through smoking. Gender provides further harm reduction evidence. Swedish women did not replace smoking with snus in the way men did, and today Swedish women have a higher than average rate of lung cancer than the rest of the EU.

Globally, evidence overwhelmingly shows that smoking tobacco causes far more of a disease burden than smokeless tobacco. But the picture is not straightforward, as there are differences in harm levels within the category of smokeless tobacco.

“Smokeless tobacco is definitely causing oral cancer and other diseases, but not in the particular form we are using in Nordic countries – snus – and to some extent also in the US,” Fagerström continued.

The FDA is able to issue a licence to tobacco harm reduction products that allows them to be marketed as less harmful than cigarettes. The conditions are stringent. Swedish snus was the first product globally to be recognised in this way by the FDA.

Snus producer Swedish Match said in a statement on 22 October 2019, when the FDA licence was granted: “Modified risk status classifies General Snus as a tobacco product that is sold or distributed for use to reduce harm or the risk of tobacco-related disease associated with commercially marketed tobacco products.

The Swedish snus experience, Fagerström concluded, illustrates emphatically that cigarettes can be replaced by less hazardous ways of imbibing nicotine. “Non-combustible products like Swedish snus are significantly less harmful. We have seen that in epidemiological studies. Today we have nicotine pouches without tobacco that are thought to be even less harmful.”

WHO: 5,000 fewer lives a year lost to cancer if Europe ups alcohol tax