The South African government has made three critical mistakes in its rollout of COVID-19 vaccines, write University of Cape Town’s Prof Nicoli Nattrass and Prof Jeremy Seekings in GroundUp.

Nattrass is professor of economics at UCT. Seekings is director of UCT’s Centre for Social Science Research. They write:

At no point, however, has the vaccination rate been fast enough to use up the steadily accumulating supply of doses in the system (see graph). 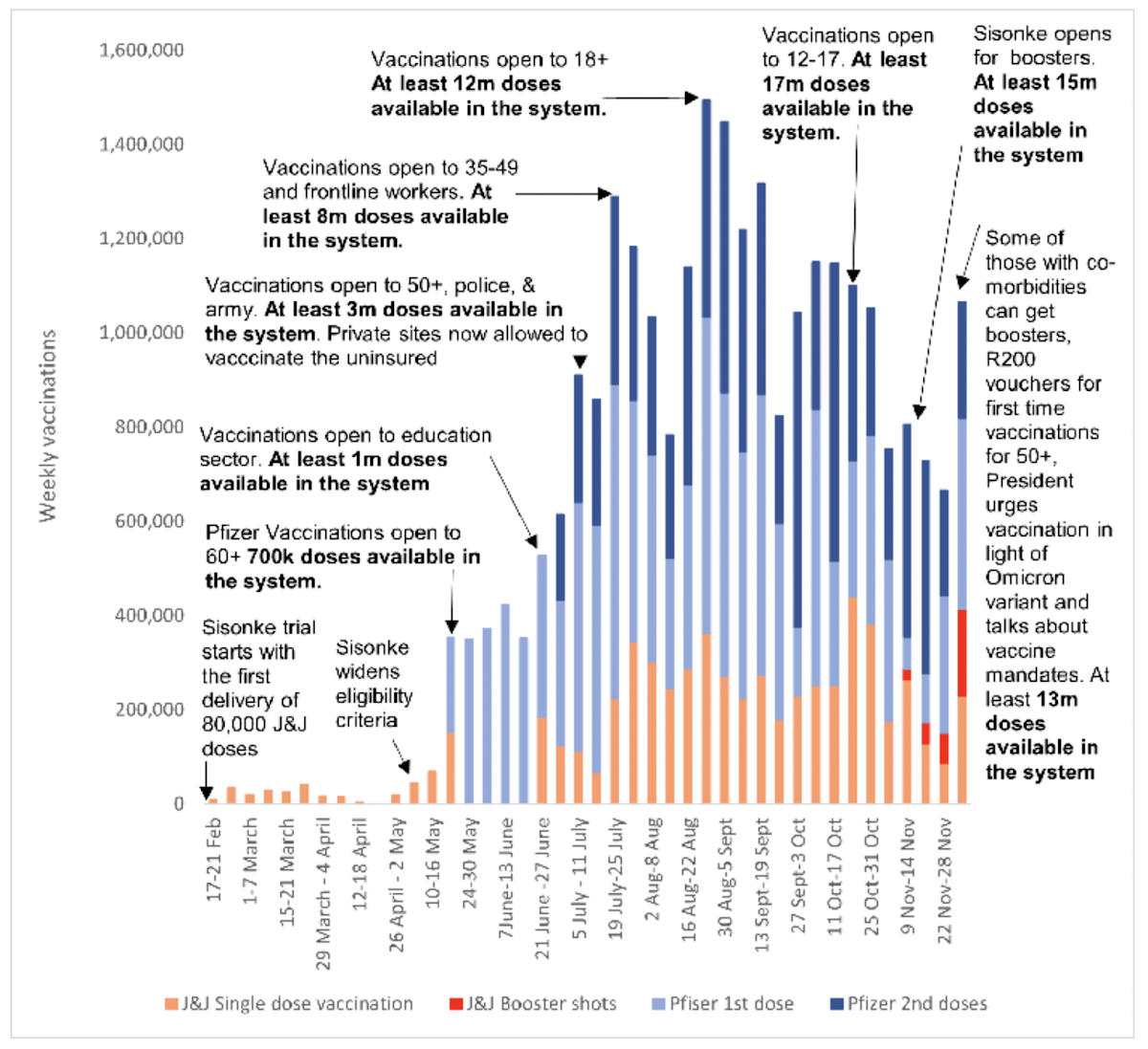 Back in May, when the public sector rollout began, Geffen and Low argued that the government should not micro-manage the rollout and should stop worrying about so-called queue jumpers. They recommended that the government drop the requirement for prior registration, open vaccinations as soon as possible to all age groups and allow for easy vaccinations at bus-stops, pension pay-out points and so on.

How right they were.

It is clear that the national government made three key mistakes. The first was to use the Electronic Vaccination Data System (EVDS) as a trial run for the kind of electronic management system envisaged for a future National Health Insurance. Not only was this attempted rationing of vaccinations unnecessary, but it was an obstacle to those without easy access to smartphones.

The second mistake was to assume that every eligible person was able and willing to go to a vaccination site and hence the best way to ensure equitable access was to ration the supply of vaccines across multiple sites, irrespective of actual demand. This contributed to the growing stockpile of unused vaccine.

Much more should have been done to take vaccines to the elderly, especially in rural areas, and to engage communities in vaccination campaigns.

The national Health Department did respond to criticism – and the evident impracticality of its plans – and revised these and other aspects of the vaccination rollout. The recent Vooma campaigns and the offer to people over 50 years old of a R200 shopping voucher with their first vaccination have helped pick up vaccination rates. But the government was slow to remedy its third big mistake.

This third mistake was to underestimate the importance of promoting good information about vaccines and generating real excitement and energy around the vaccine rollout. Part of the problem was corruption, as the Digital Vibes scandal soaked away the necessary funds (and fuelled distrust in government).

As with many other aspects of our responses to COVID, civil society has filled some of the gaps left by government inaction. Scientists (including in the excellent Scientists’ Collective), the media, and now lawyers, have stepped up to contest false facts and other misinformation.

The government’s failure to confront misinformation was linked to its insistence, for several months, that vaccination was constrained by the supply of vaccine rather than by the demand. This belief underpinned the government’s attempts to ration vaccinations. Since mid-June the stock of available, unused, vaccines has exceeded 1m doses, rising to about 18m in October, and has declined to about 13m because we have stopped taking new shipments.

South Africa’s vaccine stocks are so large that we are now delaying deliveries and turning down additional shipments from the US. This is absurd.

We urgently need an energised state to drive demand for vaccinations. It is gratifying to see that in the face of the new Omicron variant, President Cyril Ramaphosa has energised the vaccination programme and placed mandatory vaccines on the table.

Vaccination mandates are strong, effective signals about the importance of vaccines for personal, public and occupational health. There is evidence from the United States and Europe showing that vaccination rates more than double when firms implement mandates on employees, as this encourages anyone ‘sitting on the fence’ to get vaccinated. There is also early evidence that they work in South Africa.

Vaccine mandates are not enough on their own. The national and provincial health departments must ensure everyone can easily access vaccination sites. But mandates send out an important signal, especially to the many people who appear to be hesitant rather than hostile.

Current vaccines may well be less effective at preventing infection by the Omicron variant, though they will continue to provide protection against severe illness and death by strengthening the immune response.

Only through mass vaccination will we be able to protect our hospitals during COVID waves and avoid debilitating lockdowns.

* Nattrass and Seekings are professors at the University of Cape Town.

Decline in South Africa's vaccine rate is a ‘national emergency’