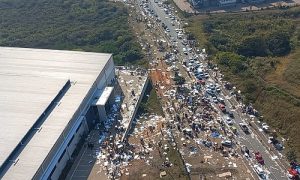 Violent unrest and looting in KwaZulu-Natal and Gauteng have decimated hospitals and health services. COVID-19 vaccination has ground to a halt. Lives are being endangered by violence as well as by lack of access to treatment, medicines, oxygen, food and essential supplies. Ambulances and clinics have been attacked and some services suspended. The crisis in the midst of a COVID third wave, has exacerbated both.

Severe staff and pharmaceutical shortages, temporary closures of health facilities or services – including dozens of hospitals and clinics – and treating patients for protest-related injuries have piled extra pressure on the health sector. It was reported yesterday that 90 pharmacies had been lost to looting.

Vaccination services had just begun to take off, when many had to close due to safety concerns and-or vaccine supply problems. In many places – such as in the Durban area – it was in any case impossible for vaccination staff or members of the public to get there, writes MedicalBrief.

By late Wednesday, high levels of unrest had begun to subside in some areas, after the South African National Defence Force (SANDF) fanned out across KZN and parts of Gauteng, and as law-abiding citizens worked with public and private security forces to guard areas.

What has not subsided are concerns about how long it will take to get health services up and running. Supply lines have been interrupted, hundreds of shops and buildings have been damaged or destroyed, and many roads are still unsafe, including parts of the N3 highway connecting Johannesburg with Durban and its busy harbour.

Police reported on Tuesday night that 72 people had died during the troubles, which began as a protest against the imprisonment of former president Jacob Zuma for contempt of court, but quickly morphed into massive generalised unrest and opportunistic looting with destruction. By yesterday, more than 1,200 people had been arrested for violence and looting.

KwaZulu-Natal Premier Sihle Zikalala confirmed on Tuesday that the vaccine rollout had ground to a halt due to the unrest. Damage to public and private infrastructure at that point was in the region of R1 billion.

“The current situation has a huge potential to undermine our advance in battling the delta variant of COVID-19, which is increasing at an uncontrollable rate across the entire province,” he said in a statement.

The healthcare sector, public and private, had been one of the hardest hit by the unrest: “Some clinics have had to be closed as a result of the unrest. It is extremely concerning that in some cases protesters stopped the delivery of much-needed oxygen to patients.”

Blockades of key infrastructure and of roads made public mobility difficult. Public transport was halted. Many hospital staff were unable to travel.

“A number of hospitals, community health centres and clinics across KwaZulu-Natal have been operating on skeletal staff, with many nurses, doctors, allied health workers and support staff, including general staff workers, unable to report for work.

“Some clinics have had to be closed as a result of the unrest. Many hospitals with trauma cases are unable to undergo important operational interventions such as X-Rays, and others,” Zikalala continued.

“With the blockades, we might start losing lives unnecessarily. We are appealing to the collective conscience of all of those who are trying to render our province ungovernable to desist from what they are doing, in order to avert unnecessary loss of lives.

There have been reports of delays with the collection of mortal remains, as pathology services battle to reach scenes where people have died. The Independent Police Investigative Directorate announced that it had been unable to access crime scenes or reach bodies due to the protests, with roads strewn with burning tyres and attacks on vehicles.

More than 30 private ambulance services in KwaZulu-Natal stopped operating on Monday, to protect their vehicles from protesters.

KwaZulu-Natal Private Ambulances Services Secretary-general Mario Booysen said the decision followed an attack on a government ambulance on Sunday night in northern KZN. In Howick, an ambulance was burnt, and another was attacked with rocks in Mariannhill. Booysen said ambulances have been blocked by protesters since the unrest started.

Netcare announced that six of its Medicross facilities had temporarily closed, along with five of its Prime Cure facilities. On Tuesday, a Twitter report said a handful of on- and off-duty police had successfully defended Westville hospital from being overrun and looted.

Netcare CEO Dr Richard Friedland said a distribution centre for a major pharmaceutical supplier was looted on Tuesday and the hospital group had to fly in emergency supplies. He said police escorts were accompanying oxygen tankers to Netcare hospitals.

The National Hospital Network – which represents 241 hospitals, 74 of them providing acute services – called on the police and SANDF for help in protecting its hospitals and staff, and escorting food, oxygen and other supplies to them.

NHN spokesperson Neville Nair said the unrest, combined with COVID-19, was reaching crisis proportions and that many of its hospitals were in dire straits, News24 reported on Wednesday. KwaZulu-Natal has been particularly badly affected.

Hospitals have been also been hit by staff shortages, with nurses, support staff and some doctors unable to get to work during the unrest. Some staff at work have not been able to return home safely, and have had to sleep at work. Lack of transport has made it impossible to discharge some patients.

Supplies of food, medicines and oxygen to some hospitals had been compromised. Vital oncology and dialysis services were badly impacted, News24 was told, and one hospital lost communications when fibre lines were destroyed. "The situation on the ground is simply untenable,” said Nair, describing the collateral damage as “unimaginable”.

NHN called on the government to: provide on-site security to hospitals, both public and private; provide transport escorts for oxygen and medical and other essential supplies; and secure communications and IT systems.

Doctors Without Borders (MSF) released a statement on 14 July: “We call for immediate steps to safeguard the right to healthcare and safety of patients, healthcare workers, medical infrastructure and supplies to avert a drastic escalation of the current COVID-19 driven healthcare crisis.

“There have been disruptions in every district of KwaZulu-Natal, where staff cannot work due to public transport stoppages, road closures and the suspension of private ambulance services,” said MSF.

“Certain Gauteng hospitals and their emergency departments, already stretched by a surge in COVID-19 cases, are overwhelmed due to staff shortages and a huge influx of trauma cases linked to the violence, forcing doctors to choose who receives life-saving treatment, and who does not. Several COVID-19 vaccination sites have also been closed.”

MSF work in KZN and Gauteng has suffered direct disruptions, the statement said, including at Ngwelezane Hospital in Empangeni.

“In Eshowe, where we have run HIV-TB programmes since 2011, our team was forced to suspend all medical and community-based activities. Clinic-based HIV-TB services are currently inaccessible for many, and diabetics and hypertensives at high risk of severe COVID-19 are unable to access their chronic medication,” said MSF.

“Our partner organisation, SHINE, had their offices damaged and looted and our team managed to hide two of our medical transport vehicles from looting occurring on the same street as our office. One of our doctors, caught in the melee of looters, was tear gassed.”

“The urgency of ensuring that health facilities and supplies are not targeted during social unrest and violence is crucial, even more so during the height of the current wave of COVID-19 infections,” said MSF.

The SA Medical Association (SAMA) called for the Department of Health to look into effective ways of safely getting patients to medical care facilities amid unrest. It asked for contingency plans for airlifting and inter-facility transportation of patients, and for protection for medical staff as they try to deliver essential healthcare services.

On Tuesday, the Presidency announced in a statement that all law enforcement and security agencies were now collaborating to ensure public order in ‘hotspot’ areas, protecting key public and private infrastructure.

“These law enforcement agencies have also been tasked to protect COVID-19 vaccine storage sites, schools and clinics where vaccinations are currently rolled out,” it said.

There has been concern about the theft of vaccines. But National Health Department spokesperson Popo Maja told TimesLIVE on Tuesday that vaccines were stored in their own facilities and delivered to vaccination sites, and had not been stolen.

However, the department stopped vaccinations at some medical facilities that were targeted by looters or were close to looting hotspots.

“The government and the private sector’s priority is to protect lives and prevent harm to staff, patients and the medical supplies and property that form part of the vaccination programme,” said Maja. Consequently, there had been temporary closure of some vaccination sites that had been damaged or might be at risk.

The electronic vaccine data system would automatically reschedule appointments for people unable to attend. The health department will publicise a list of affected areas.