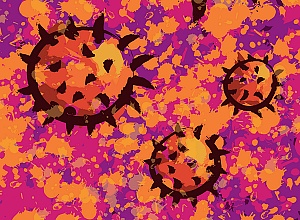 A WHO-funded systematic review that concluded that firm conclusions could not be drawn about the airborne transmission of COVID-19 is “concerning“, according to correspondence in The Lancet. The scientists cite 10 streams of evidence that collectively support the hypothesis that SARS-CoV-2 is transmitted primarily by the airborne route.

Heneghan and colleagues' systematic review, funded by the World Health Organisation (WHO), published in March, 2021, as a preprint, states: “The lack of recoverable viral culture samples of SARS-CoV-2 prevents firm conclusions to be drawn about airborne transmission”.

This conclusion, and the wide circulation of the review's findings, is concerning because of the public health implications.

If an infectious virus spreads predominantly through large respiratory droplets that fall quickly, the key control measures are reducing direct contact, cleaning surfaces, physical barriers, physical distancing, use of masks within droplet distance, respiratory hygiene, and wearing high-grade protection only for so-called aerosol-generating health-care procedures. Such policies need not distinguish between indoors and outdoors, since a gravity-driven mechanism for transmission would be similar for both settings. But if an infectious virus is mainly airborne, an individual could potentially be infected when they inhale aerosols produced when an infected person exhales, speaks, shouts, sings, sneezes, or coughs. Reducing airborne transmission of virus requires measures to avoid inhalation of infectious aerosols, including ventilation, air filtration, reducing crowding and time spent indoors, use of masks whenever indoors, attention to mask quality and fit, and higher-grade protection for health-care staff and front-line workers.

Airborne transmission of respiratory viruses is difficult to demonstrate directly. Mixed findings from studies that seek to detect viable pathogen in air are therefore insufficient grounds for concluding that a pathogen is not airborne if the totality of scientific evidence indicates otherwise. Decades of painstaking research, which did not include capturing live pathogens in the air, showed that diseases once considered to be spread by droplets are airborne.

Ten streams of evidence collectively support the hypothesis that SARS-CoV-2 is transmitted primarily by the airborne route.

Detailed analyses of human behaviours and interactions, room sizes, ventilation, and other variables in choir concerts, cruise ships, slaughterhouses, care homes, and correctional facilities, among other settings, have shown patterns – long-range transmission and over-dispersion of the basic reproduction number (R0), discussed below – consistent with airborne spread of SARS-CoV-2 that cannot be adequately explained by droplets or fomites.

The high incidence of such events strongly suggests the dominance of aerosol transmission.

Third, asymptomatic or pre-symptomatic transmission of SARS-CoV-2 from people who are not coughing or sneezing is likely to account for at least a third, and perhaps up to 59%, of all transmission globally and is a key way SARS-CoV-2 has spread around the world, supportive of a predominantly airborne mode of transmission. Direct measurements show that speaking produces thousands of aerosol particles and few large droplets, which supports the airborne route.

Fourth, transmission of SARS-CoV-2 is higher indoors than outdoors and is substantially reduced by indoor ventilation.

Both observations support a predominantly airborne route of transmission.

Fifth, nosocomial infections have been documented in health-care organisations, where there have been strict contact-and-droplet precautions and use of personal protective equipment (PPE) designed to protect against droplet but not aerosol exposure.
Sixth, viable SARS-CoV-2 has been detected in the air. In laboratory experiments, SARS-CoV-2 stayed infectious in the air for up to 3 h with a half-life of 1·1 h.

Although other studies have failed to capture viable SARS-CoV-2 in air samples, this is to be expected. Sampling of airborne virus is technically challenging for several reasons, including limited effectiveness of some sampling methods for collecting fine particles, viral dehydration during collection, viral damage due to impact forces (leading to loss of viability), re-aerosolisation of virus during collection, and viral retention in the sampling equipment.

Seventh, SARS-CoV-2 has been identified in air filters and building ducts in hospitals with COVID-19 patients; such locations could be reached only by aerosols.

Eighth, studies involving infected caged animals that were connected to separately caged uninfected animals via an air duct have shown transmission of SARS-CoV-2 that can be adequately explained only by aerosols.

Ninth, no study to our knowledge has provided strong or consistent evidence to refute the hypothesis of airborne SARS-CoV-2 transmission. Some people have avoided SARS-CoV-2 infection when they have shared air with infected people, but this situation could be explained by a combination of factors, including variation in the amount of viral shedding between infectious individuals by several orders of magnitude and different environmental (especially ventilation) conditions.

Individual and environmental variation means that a minority of primary cases (notably, individuals shedding high levels of virus in indoor, crowded settings with poor ventilation) account for a majority of secondary infections, which is supported by high-quality contact tracing data from several countries.

Wide variation in respiratory viral load of SARS-CoV-2 counters arguments that SARS-CoV-2 cannot be airborne because the virus has a lower R0 (estimated at around 2·5) than measles (estimated at around 15), especially since R0, which is an average, does not account for the fact that only a minority of infectious individuals shed high amounts of virus. Over-dispersion of R0 is well documented in COVID-19.

Tenth, there is limited evidence to support other dominant routes of transmission –respiratory droplet or fomite.

Ease of infection between people in close proximity to each other has been cited as proof of respiratory droplet transmission of SARS-CoV-2. However, close-proximity transmission in most cases along with distant infection for a few when sharing air is more likely to be explained by dilution of exhaled aerosols with distance from an infected person.

The flawed assumption that transmission through close proximity implies large respiratory droplets or fomites was historically used for decades to deny the airborne transmission of tuberculosis and measles.

In conclusion, we propose that it is a scientific error to use lack of direct evidence of SARS-CoV-2 in some air samples to cast doubt on airborne transmission while overlooking the quality and strength of the overall evidence base. There is consistent, strong evidence that SARS-CoV-2 spreads by airborne transmission. Although other routes can contribute, we believe that the airborne route is likely to be dominant. The public health community should act accordingly and without further delay.

Many ventilation systems may increase risk of COVID-19 exposure

WHO changes tack on airborne spread of COVID-19