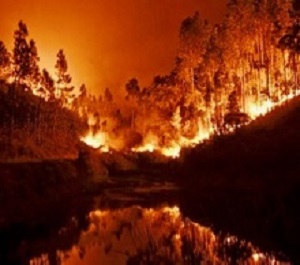 When exposed in a laboratory to pollution levels comparable to those found in the atmosphere of the Amazon region during the forest and crop burning season, human lung cells suffer severe DNA damage and stop dividing, while after 72 hours of exposure, over 30% of the cultured cells are dead.

The main culprit appears to be retene, a chemical compound that belongs to the class of polycyclic aromatic hydrocarbons (PAHs).

These are some of the main findings of a study by a group of Brazilian researchers. "We found no information on the toxicity of retene in the scientific literature. I hope our findings serve as an incentive for the compound to be better studied and for its environmental concentrations to be regulated by health organizations," said Nilmara de Oliveira Alves Brito, first author of the article and awardee of a post-doctoral scholarship from FAPESP.

"When I was doing my master's research at UFRN, I noticed that exposure of lung cells to this particulate matter emitted by biomass burning led to mutations in lung cell DNA," Alves Brito said. "This more recent study set out to investigate the mechanisms by which this happens."

The first step, she explained, consisted of determining the concentration of pollutants to be used in the lab experiments designed to mimic the exposure suffered by people who live in the area of intensely changing land use and plant cover known as the "deforestation arc" – 500,000 square kilometers extending westward from eastern and southern Pará into Mato Grosso, Rondônia and Acre.

Using mathematical models, the researchers calculated the human lung's capacity to inhale particulate matter at the height of the burning season and the percentage of pollutants that is deposited in lung cells. "Based on this theoretical mass, we determined the concentration levels to be tested using cultured cells," Alves Brito said.

The pollutants used in vitro were collected in a natural area near Porto Velho, Rondônia, during the burning season, which peaks in September and October. "The samples were collected using a device that draws in air and deposits fine particles with a diameter of less than 10 micrometers in a filter. We were interested in studying these very fine particles because they're small enough to penetrate the alveoli in the lungs," Alves Brito said.

According to Artaxo, the filters were frozen shortly after the particulate matter was collected because the organic compounds found in the pollution plume are highly volatile.

"This material was shipped to São Paulo and diluted in a nutritive solution, which was then applied to the cell cultures," he said. "The proportion of pollutants used was the same as that found in the air inhaled by the inhabitants of Porto Velho."

The cultured cells treated with the solution were compared with a group of control cells, which received only the solvent used to extract pollutants from the filters. The aim was to confirm that any adverse effects observed were caused by the particulate matter and not by the solvent.

In the very first moments of exposure the lung cells began producing large amounts of pro-inflammatory molecules. Inflammation was followed by an increase in the release of reactive oxygen species (ROS), substances that cause oxidative stress. Large amounts of ROS cause damage to cellular structures.

"To understand the pathways that were inducing oxidative stress, we analysed the cell cycle and found that it was impaired by an increase in the expression of proteins such as P53 and P21. The cells stopped replicating, which suggested that DNA damage was occurring," Alves Brito said.

The researchers performed specific tests to confirm genetic damage. Based on their observation of increased expression of the protein LC3 and other specific markers, they also found that the cells entered a process of autophagy whereby they degraded their own internal structures.

"All this damage was observed in only 24 hours of exposure," Alves Brito said. "As time passed, the genetic damage increased, and the cells entered a process of apoptosis (non-inflammatory programmed cell death) and necrosis (unprogrammed cell death in which cells release their contents into the extracellular environment, inducing inflammation at the site)."

Whereas only 2% of control cells had died from necrosis after 72 hours, in the culture treated with pollutants, cell mortality reached 33%. "Not all the cells die, but the survivors suffer DNA damage, which may predispose them to the development of cancer in future," Alves Brito said.

Before beginning the experiment with cultured cells, Alves Brito and collaborators completed an analysis of the substances present in the particulate matter collected in the Amazon region. They identified the presence of several PAHs, many of which are known to be carcinogenic. "We observed that the most abundant PAH was retene," Alves Brito said. "We therefore decided to repeat the experiment with the cells using this substance in isolation but at the same concentration as that found in the particulate matter. We observed that retene alone also induced DNA damage and cell death."

According to Artaxo, the death of large numbers of lung cells in a living organism can lead to breathing problems and even severe diseases such as pulmonary emphysema. "In a previous study, we showed that the decline in deforestation from 27,000 km2 in 2004 to 4,000 km2 in 2012 avoided the death of at least 1,700 people from diseases associated with pollution," he said. "Curiously enough, most of these deaths wouldn't have occurred in the Amazon but in the South of Brazil because of the long-distance transportation of pollutants and also because of the region's higher population density."

Although retene is not emitted by the burning of fossil fuels, the main source of pollution in Brazil's urban areas, the researchers stress that this compound can be found in the atmosphere in São Paulo and other cities, probably owing to the burning of sugarcane and other kinds of biomass on nearby farms.

In the article, the researchers note that while most research on exposure to air pollution focuses on the role of fossil fuels in atmospheric pollution, some 3bn people worldwide are exposed to air pollution from biomass burning, including the use of wood or coal as fuel in cooking stoves or home heating, as well as from deforestation and agricultural practices. Moreover, the authors add, some 7m deaths worldwide, or one in every eight deaths, result from exposure to air pollution, according to a report issued by the World Health Organisation (WHO) in 2012.

"The combination of forest fires and human occupation has turned biomass burning into a serious threat to public health. The majority of forest fires occur in the deforestation arc, directly impacting over 10m people in the area. Many studies have identified severe effects on human health, such as increased incidence of asthma, morbidity and mortality, mainly in the most vulnerable populations such as children and the elderly," the authors note.

Abstract
Most of the studies on air pollution focus on emissions from fossil fuel burning in urban centers. However, approximately half of the world's population is exposed to air pollution caused by biomass burning emissions. In the Brazilian Amazon population, over 10 million people are directly exposed to high levels of pollutants resulting from deforestation and agricultural fires. This work is the first study to present an integrated view of the effects of inhalable particles present in emissions of biomass burning. Exposing human lung cells to particulate matter smaller than 10 µm (PM10), significantly increased the level of reactive oxygen species (ROS), inflammatory cytokines, autophagy, and DNA damage. Continued PM10 exposure activated apoptosis and necrosis. Interestingly, retene, a polycyclic aromatic hydrocarbon present in PM10, is a potential compound for the effects of PM10, causing DNA damage and cell death. The PM10 concentrations observed during Amazon biomass burning were sufficient to induce severe adverse effects in human lung cells. Our study provides new data that will help elucidate the mechanism of PM10-mediated lung cancer development. In addition, the results of this study support the establishment of new guidelines for human health protection in regions strongly impacted by biomass burning.