Even low levels of air pollution linked to heart damage 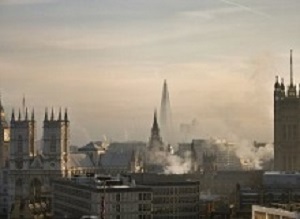 People exposed to even low levels of air pollution are more likely to develop structural changes in the heart that can be a precursor to heart failure, Reuters Health reports a UK study suggests. While exposure to air pollution has long been linked to an increased risk of heart attacks and strokes, less is known about how pollutants might alter the structure and function of the heart, the study team writes.

Researchers looked at data on exposure to traffic-related air pollution and results from heart MRIs for 3,920 adults who did not have cardiovascular disease. They found that previous exposure to tiny particles known as PM2.5, which include dust, dirt, soot and smoke, and to nitrogen dioxide, a poisonous gas in car exhaust, were associated with enlargement on both sides of the heart.

“Air pollution appears to be damaging for cardiovascular health even at a relatively low exposure level,” said lead study author Nay Aung of Queen Mary University of London. Individuals exposed to higher level of air pollutants were more likely to have larger cardiac ventricles (main pumping chambers) after accounting for potential factors that can independently influence the size of these chambers, Aung said. “This is important because these observed changes in the heart were similar to the patterns seen in heart failure development,” Aung said.

To assess exposure to traffic fumes, researchers examined data on average annual air pollution levels at participants’ home addresses at the start of the study. Half of the participants were exposed to average annual concentrations of less than 9.9 micrograms of PM2.5 particles per cubic meter of air (ug/m3) and 28.2 ug/m3 of nitrogen dioxide.

For fine particulate matter, that’s well within UK guidelines limiting average exposure to no more than 25 ug/m3 of PM2.5, although the World Health Organisation (WHO) has said there are no safe limits for PM2.5 exposure, Aung and colleagues note.

Researchers measured participants’ heart structure with MRIs a median of 5.2 years after assessing their air pollution exposure. For every extra 1 ug/m3 of PM2.5 and every additional 10 ug/m3 of nitrogen dioxide people were exposed to near their homes, their hearts were enlarged by approximately 1 percent, the study found.

The type of enlargement seen in the study is a “well-recognised… adaptation heralding heart failure development,” the authors note.

Heart failure happens when the heart muscle is too weak to pump enough blood through the body. Symptoms can include fatigue, weight gain from fluid retention, shortness of breath and coughing or wheezing. Medications can help strengthen the heart and minimize fluid build-up in the body.

The study wasn’t a controlled experiment designed to prove whether or how air pollution might directly cause enlargement in the heart.

This can overwork the heart, Horne, who wasn’t involved in the study, said. "Even people who are free from cardiovascular disease may, over time, develop diseases due to chronic exposure to air pollution,” Horne said.

Abstract
Background: Exposure to ambient air pollution is strongly associated with increased cardiovascular morbidity and mortality. Little is known about the influence of air pollutants on cardiac structure and function. We aim to investigate the relationship between chronic past exposure to traffic-related pollutants and the cardiac chamber volume, ejection fraction, and left ventricular remodeling patterns after accounting for potential confounders.
Methods: Exposure to ambient air pollutants including particulate matter and nitrogen dioxide was estimated from the Land Use Regression models for the years between 2005 and 2010. Cardiac parameters were measured from cardiovascular magnetic resonance imaging studies of 3920 individuals free from pre-existing cardiovascular disease in the UK Biobank population study. The median (interquartile range) duration between the year of exposure estimate and the imaging visit was 5.2 (0.6) years. We fitted multivariable linear regression models to investigate the relationship between cardiac parameters and traffic-related pollutants after adjusting for various confounders.
Results: The studied cohort was 62±7 years old, and 46% were men. In fully adjusted models, particulate matter with an aerodynamic diameter <2.5 µm concentration was significantly associated with larger left ventricular end-diastolic volume and end-systolic volume (effect size = 0.82%, 95% CI, 0.09–1.55%, P=0.027; and effect size = 1.28%, 95% CI, 0.15–2.43%, P=0.027, respectively, per interquartile range increment in particulate matter with an aerodynamic diameter <2.5 µm) and right ventricular end-diastolic volume (effect size = 0.85%, 95% CI, 0.12–1.58%, P=0.023, per interquartile range increment in particulate matter with an aerodynamic diameter <2.5 µm). Likewise, higher nitrogen dioxide concentration was associated with larger biventricular volume. Distance from the major roads was the only metric associated with lower left ventricular mass (effect size = -0.74%, 95% CI, -1.3% to -0.18%, P=0.01, per interquartile range increment). Neither left and right atrial phenotypes nor left ventricular geometric remodeling patterns were influenced by the ambient pollutants.
Conclusions: In a large asymptomatic population with no prevalent cardiovascular disease, higher past exposure to particulate matter with an aerodynamic diameter <2.5 µm and nitrogen dioxide was associated with cardiac ventricular dilatation, a marker of adverse remodeling that often precedes heart failure development.