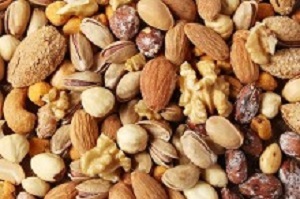 People with stage III colon cancer who regularly eat nuts are at significantly lower risk of cancer recurrence and mortality than those who don’t, according to a large, long, study led by researchers at Yale Cancer Centre.

The study followed 826 participants in a clinical trial for a median of 6.5 years after they were treated with surgery and chemotherapy. Those who regularly consumed at least two, one-ounce servings of nuts each week demonstrated a 42% improvement in disease-free survival and a 57% improvement in overall survival.

“Further analysis of this cohort revealed that disease-free survival increased by 46% among the subgroup of nut consumers who ate tree nuts rather than peanuts,” said Dr Charles S Fuchs, director of Yale Cancer Centre and senior author of the study. Tree nuts include almonds, walnuts, hazelnuts, cashews, and pecans, among others. In contrast, peanuts are actually in the legumes family of foods.

“These findings are in keeping with several other observational studies that indicate that a slew of healthy behaviours, including increased physical activity, keeping a healthy weight, and lower intake of sugar and sweetened beverages, improve colon cancer outcomes,” said Dr Temidayo Fadelu, a postdoctoral fellow at Dana-Farber Cancer Institute and lead author of the paper. “The results highlight the importance of emphasising dietary and life-style factors in colon cancer survivorship.”

Additionally, the researchers emphasized, the study highlighted connections between biological mechanisms that worsen disease not just in colon cancer but in certain chronic illnesses such as type 2 diabetes.

Many previous studies have reported that nuts, among other health benefits, may help to reduce insulin resistance, a condition in which the body has difficulty processing the insulin hormone. Insulin resistance leads to unhealthy levels of sugar in the blood and is often a predecessor to type 2 diabetes and related illnesses.

Earlier research among patients with colon cancer has revealed worse outcomes among those with lifestyle factors that heighten insulin resistance, such as obesity, lack of exercise, and a diet with high levels of carbohydrates that quickly raise levels of blood sugar.

“These studies support the hypothesis that behaviours that make you less insulin resistant, including eating nuts, seem to improve outcomes in colon cancer,” Fuchs said. “However, we don’t know yet what exactly about nuts is beneficial.”

Nuts also might play a positive role by satisfying hunger with less intake of carbohydrates or other foods associated with poor outcomes, Fuchs noted. Patients may not be eating nuts due to concerns about the high fat content. For example, a one-ounce serving of about 24 almonds holds about 200 calories, including 14 grams of fat. “People ask me if increasing nut consumption will lead to obesity, which leads to worse outcomes,” he said. “But what’s really interesting is that in our studies, and across the scientific literature in general, regular consumers of nuts tend to be leaner.”

Dietary changes can make a difference. An earlier analysis of diets in the same patient cohort by Fuchs and his colleagues found a significant link between coffee consumption and reduced recurrence and mortality in colon cancer.

When Fuchs advises his patients about lifestyle choices, “first and foremost I talk about avoiding obesity, exercising regularly and staying away from a high-carbohydrate diet,” he said. “Then we talk about things like coffee and nuts. If you like coffee or nuts, enjoy them, and if you don’t, there are many other helpful steps you can take.”

“Overall, we are working to apply the same rigorous science to the understanding of diet and lifestyles in the colon cancer patient population that we apply to defining new drugs,” Fuchs said.

Abstract
Purpose: Observational studies have reported increased colon cancer recurrence and mortality in patients with states of hyperinsulinemia, including type 2 diabetes, obesity, sedentary lifestyle, and high glycemic load diet. Nut intake has been associated with a lower risk of type 2 diabetes, metabolic syndrome, and insulin resistance. However, the effect of nut intake on colon cancer recurrence and survival is not known.
Patients and Methods: We conducted a prospective, observational study of 826 eligible patients with stage III colon cancer who reported dietary intake on food frequency questionnaires while enrolled onto a randomized adjuvant chemotherapy trial. Using Cox proportional hazards regression, we assessed associations of nut intake with cancer recurrence and mortality.
Results: After a median follow-up of 6.5 years, compared with patients who abstained from nuts, individuals who consumed two or more servings of nuts per week experienced an adjusted hazard ratio (HR) for disease-free survival of 0.58 (95% CI, 0.37 to 0.92; Ptrend = .03) and an HR for overall survival of 0.43 (95% CI, 0.25 to 0.74; Ptrend = .01). In subgroup analysis, the apparent benefit was confined to tree nut intake (HR for disease-free survival, 0.54; 95% CI, 0.34 to 0.85; Ptrend = .04; and HR for overall survival, 0.47; 95% CI, 0.27 to 0.82; Ptrend = .04). The association of total nut intake with improved outcomes was maintained across other known or suspected risk factors for cancer recurrence and mortality.
Conclusion: Diets with a higher consumption of nuts may be associated with a significantly reduced incidence of cancer recurrence and death in patients with stage III colon cancer.