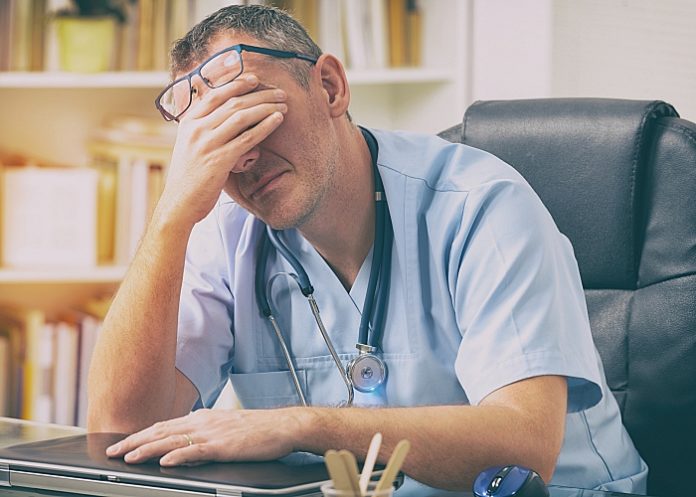 Senior doctors in Britain have warned that practice staff and GPs are quitting after an unprecedented wave of abuse from patients and weeks of public pressure over face-to-face appointments, reports The Guardian.

Practice managers, receptionists and doctors have spoken of daily confrontations with patients over issues including appointments, vaccinations and blood tests. Many practices are maintaining COVID-19 protocols, including the use of face masks; some patients have refused to wear them and become abusive when asked to do so.

Some said that patients had been responding to media campaigns over recent weeks, which have led to Prime Minister Boris Johnson and the health secretary, Sajid Javid, pledging to increase in-person appointments.

The prime minister said the remaining GPs would have to deliver a further 50 million appointments, saying it was “only reasonable” that people should be treated in person.

GPs conducted about 25.5m appointments in August, including 1.5m COVID vaccinations, compared with 23.8m in August 2019. Remote consultations remain higher than they were before the pandemic, with 42% of consultations conducted by phone or video link.

Professor Martin Marshall, chair of the Royal College of GPs, said: “The criticism that has been directed towards GPs and our teams by some media and politicians has been some of the worst in memory. Itʼs demoralising and unfair when youʼre trying to do your best for patients in as safe a way as possible, to consistently be told youʼre not doing enough.

“Itʼs having a dangerous impact on the mental health and well-being of GPs and our teams, with numerous reports of practice staff being on the receiving end of abuse from patients.”

He called on the government to demonstrate support for GPs and admin staff and urgently make good on a pre-pandemic commitment to recruit 6,000 GPs and 26,000 staff.

Javid was challenged on Radio 4ʼs Today programme on Saturday about his support for newspaper campaigns after Dr Rachel Warrington, a GP partner in Bristol, said he had not supported GPs and had “no understanding” of what was happening in surgeries.

Angelika Slon, who manages a practice in south London, said she was seeing numerous staff absences as a direct outcome of abuse by patients and the increasing workload.

“The amount of rudeness has skyrocketed. We are understaffed – I recruited two new receptionists recently. One left within a couple of days and the other after a week and a half, because they couldnʼt cope with the pressure.”

As vaccination levels have increased and restrictions have relaxed, some patients have reacted badly to being told the practice is continuing to maintain NHS infection-control measures, including wearing masks.

A GP who qualified in 2019 said: “Every day I leave work feeling broken and shattered. The worst is where patients are aggressive and hostile to the point I am close to tears, feeling my attempts to help people and do my job are completely unappreciated.”

The Department of Health and Social Care (DHSC) said that record numbers of people were training to become GPs, with up to 4,000 new starters this year.

Meanwhile, Daily Mail reports that  family doctors in Britain are offering remote appointments for up to 12 patients at once, to lessen their workload. However, health charities and MPs have warned serious diseases like cancer are being missed in one-to-one video and telephone GP consultations.

A page on the NHS website says: “They replace routine one-to-one appointments. This means that the GP or practice nurse practitioner can see up to 12 patients in 40-60 minutes. This potentially doubles productivity and access to routine care and follow-up appointments.”

But patient organisations fear the move to group calls will increase the dangers even further. They are worry about confidential medical information being shared with strangers and say “timid people risk being overlooked as more dominant patients hog the camera”.

Dennis Reed, from Silver Voices, a campaign group for the over-60s, said: “As if one-to-one remote appointments were not alarming enough… this is a step way too far. The number of consultations taking place in surgeries has plummeted from 80% before the pandemic to just 57% this July.”

Serious conditions were already going undiagnosed in remote consultations "and people are dying", he added. "We are concerned that some timid old people may sink away into the corner and be overlooked while other patients dominate proceedings.”

GPs have been offering controversial group appointments in person for several years and the NHS says they are a great way to “double productivity”. But some patients are now being asked to dial into group video calls so staff can review their treatment and give advice on managing their condition remotely. The sessions, writes Daily Mail, are typically used to offer continuing care to people with common illnesses like diabetes and asthma, rather than for diagnosing new issues.

The Royal College of GPs (RCGP) said it was likely that some group appointments would not return to a former face-to-face format after the pandemic, given the “capacity of practices”.

Rachel Power, chief executive of the Patients Association, said: “Group consultations may help some patients by providing an opportunity to discuss their conditions with others in the same situation. But patients must have the choice as to whether to participate, or to continue with more traditional GP services, and if they do participate then their privacy must be assured.”

“No patient will ever be forced to join a group consultation if they don't feel comfortable doing so. The outcomes for patients can include a greater ability for self-management, increased health literacy and more attention to the psychological issues that can arise from their condition.”

‘I gave up medicine to save my mental health’

Facebook
Twitter
WhatsApp
Linkedin
Email
Previous articleCanada: Refusal to use preferred pronouns is a human rights offence
Next articleHRT not linked to increased risk of dementia — Largest study yet