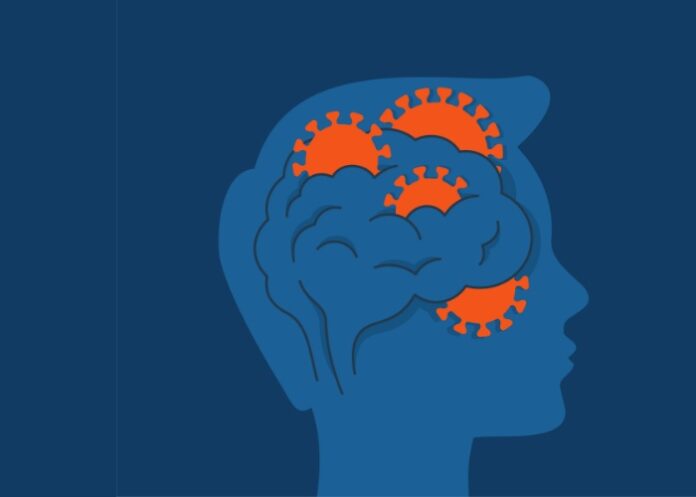 COVID-19 may cause changes in the brain, including greater loss of grey matter and tissue damage, than naturally occurs in uninfected people, a large Oxford University study in Nature has found. The study is the first involving people who underwent brain scans both before they contracted COVID and months after.

“To me, this is pretty convincing evidence that something changes in the brains of this overall group of people with COVID,” said Dr Serena Spudich, chief of neurological infections and global neurology at the Yale School of Medicine, who was not involved in the study.

But, she cautioned: “To make a conclusion that this has some long-term clinical implications for the patients I think is a stretch. We don’t want to scare the public and have them think, ‘Oh, this is proof that everyone’s going to have brain damage and not be able to function.ʼ”

The study involved 785 participants, aged from 51 to 81, drawn from the UK Biobank. Participants underwent two brain scans roughly three years apart, plus some basic cognitive testing. In between their two scans, 401 participants tested positive for the coronavirus, all infected between March 2020 and April 2021.

The other 384 participants formed a control group because they had not been infected with the coronavirus and had similar characteristics to the infected patients in areas like age, sex, medical history and socioeconomic status.

With normal ageing, people lose a tiny fraction of grey matter each year. For example, in regions related to memory, the typical annual loss is between 0.2% and 0.3%, the researchers said.

But COVID patients in the study, who had their second brain scan an average of four and a half months after their infection, lost more than non-infected participants, experiencing between 0.2% and 2% additional grey matter loss in different brain regions over the three years between scans. They also lost more overall brain volume and showed more tissue damage in certain areas.

The study’s lead author, Gwenaëlle Douaud, a professor in the department of clinical neurosciences at the University of Oxford, said that although the number of hospitalised patients in the study, 15, was too small to yield conclusive data, results suggested that their brain atrophy was worse than the mildly afflicted patients.

People who had COVID also showed greater decline than uninfected people on a cognitive test related to attention and efficiency in performing a complex task. But outside experts and Douaud noted that the cognitive testing was rudimentary, so the study is very limited in what it can say about whether the grey matter loss and tissue damage the COVID patients experienced affected their cognitive skills.

“None of them got thorough enough cognitive testing to know if they had significant deficits in these many regions where they found these changes in volume,” said Dr Benedict Michael, an associate professor of neurological infections at the University of Liverpool, who is researching the neuropsychiatric effects of COVID and was not involved in the study. “We don’t know that it actually means anything for the patientʼs quality of life or function.”

The main cognitive assessment where COVID patients showed a deficit was the trail-making test, a connect-the-dots type of exercise involving alternating letters and numbers. COVID patients took longer to complete the task, which might suggest weaknesses in focus, processing speed and other skills.

One significant limitation to the study, Douaud told The New York Times, is that researchers did not have information about people’s symptoms, including whether they lost their sense of smell. The researchers also could not identify whether any patients had long COVID, so it’s unclear if the findings relate to that long-term condition.

Differences between infected and uninfected people increased with age. On the trail-making test, for example, performance was similar in both groups for people in their 50s and early 60s, but the gap widened significantly after that. “I don’t know if thatʼs because younger people recover faster or they were not as affected to start with,” Douaud said. “Could be either or it could be both.”

Michael cautioned that the findings could not be extrapolated to the many younger people experiencing post-COVID brain fog and other cognitive issues. And since grey matter and tissue damage were measured at only one time-point after infection, they didn’t know if it was just a transient change that would get better with recovery.

“There’s no one part of the brain that does one thing,” Douaud said. “There are parts of the brain in the infected participants with additional grey matter loss that have nothing to do with the smell, and the ones that are related to smell also are involved in other brain functions.”

The cause of the brain changes is unclear. The authors mentioned theories including inflammation, evidence of which has been found in other studies, and “sensory deprivation” from disrupted sense of smell.

Dr Avindra Nath, chief of the section on infections of the nervous system at the National Institute of Neurological Disorders and Stroke, who was not involved in the study, said another “critical question” was whether the brain changes could make COVID patients more prone to dementia or other deficits in the future.

And while the researchers did not find the same brain changes in patients with non-COVID pneumonia, Nath recommended studying patients with other coronaviruses or the flu “to see if these findings are distinct for COVID-19 or more generalisable”.

Spudich said the study’s greatest value may be its indication that “there’s been something that’s happened in the brain in these people”, adding that “I think people have felt that it’s so vague, so hard to measure.”

Published in the journal Nature on 7 March 2022

Abstract
There is strong evidence for brain-related abnormalities in COVID-19. It remains unknown however whether the impact of SARS-CoV-2 infection can be detected in milder cases, and whether this can reveal possible mechanisms contributing to brain pathology.
Here, we investigated brain changes in 785 UK Biobank participants (aged 51–81) imaged twice, including 401 cases who tested positive for infection with SARS-CoV-2 between their two scans, with 141 days on average separating their diagnosis and second scan, and 384 controls. The availability of pre-infection imaging data reduces the likelihood of pre-existing risk factors being misinterpreted as disease effects. We identified significant longitudinal effects when comparing the two groups, including: (i) greater reduction in grey matter thickness and tissue-contrast in the orbitofrontal cortex and parahippocampal gyrus, (ii) greater changes in markers of tissue damage in regions functionally-connected to the primary olfactory cortex, and (iii) greater reduction in global brain size.
The infected participants also showed on average larger cognitive decline between the two timepoints. Importantly, these imaging and cognitive longitudinal effects were still seen after excluding the 15 cases who had been hospitalised. These mainly limbic brain imaging results may be the in vivo hallmarks of a degenerative spread of the disease via olfactory pathways, of neuroinflammatory events, or of the loss of sensory input due to anosmia.
Whether this deleterious impact can be partially reversed, or whether these effects will persist in the long term, remains to be investigated with additional follow up.

SARS-CoV-2: No brain infection but can inflict significant damage — 40 autopsies