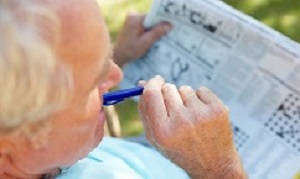 Older adults who regularly take part in word and number puzzles have sharper brains, according to the largest online study to date. The more regularly adults aged 50 and over played puzzles such as crosswords and Sudoku, the better their brain function, according to two linked studies in more than 19,000 participants, led by the University of Exeter and King’s College London.

The researchers have previously presented their findings on word puzzles at the Alzheimer's Association International Conference in 2018. The new research builds on these findings and also reports the same effect in people who regularly complete number puzzles.

Researchers asked participants in the PROTECT study, the largest online cohort in older adults, to report how frequently they engage in word and number puzzles and undertake a series of cognitive tests sensitive to measuring changes in brain function. They found that the more regularly participants engaged with the puzzles, the better they performed on tasks assessing attention, reasoning and memory.

Dr Anne Corbett, of the University of Exeter Medical School, who led the research, said: "We've found that the more regularly people engage with puzzles such as crosswords and Sudoku, the sharper their performance is across a range of tasks assessing memory, attention and reasoning.

The improvements are particularly clear in the speed and accuracy of their performance. In some areas the improvement was quite dramatic – on measures of problem-solving, people who regularly do these puzzles performed equivalent to an average of eight years younger compared to those who don't. We can't say that playing these puzzles necessarily reduces the risk of dementia in later life but this research supports previous findings that indicate regular use of word and number puzzles helps keep our brains working better for longer."

The study used participants in the PROTECT online platform, run by the University of Exeter and Kings College London. Currently, more than 22,000 healthy people aged between 50 and 96 are registered in the study, and the study is expanding into other countries including Hong Kong and the US.

The online platform enables researchers to conduct and manage large-scale studies without the need for laboratory visits. PROTECT is a 25-year study with participants being followed up annually to explore how the brain ages and what might influence the risk of dementia later in life.

PROTECT is funded by the National Institute for Health Research (NIHR) Bioresource, including through its NIHR Clinical Research Network (CRN). In addition to taking part in vital research, participants in the PROTECT study have access to a brain training programme that has already been shown to benefit brain function, as well as having the opportunity to take part in exciting new research studies into brain health and dementia prevention.

Clive Ballard, professor of age-related diseases at the University of Exeter Medical School, said: "PROTECT is proving to be one of the most exciting research initiatives of this decade, allowing us to understand more about how the brain ages and to conduct cutting-edge new studies into how we can reduce the risk of dementia in people across the UK. If you're aged 50 or over, you could sign up to take part in research that will help us all maintain healthy brains as we age."

Abstract 1
Objective: Establishing affordable lifestyle interventions that might preserve cognitive function in the aging population and subsequent generations is a growing area of research focus. Data from the PROTECT study has been utilised to examine whether number‐puzzle use is related to cognitive function in older adults.
Methods: Data from 19 078 healthy volunteers aged 50 to 93 years old enrolled on the online PROTECT study were evaluated for self‐reported frequency of performing number puzzles. Two cognitive‐test batteries were employed to assess core aspects of cognitive function including reasoning, focussed and sustained attention, information processing, executive function, working memory, and episodic memory. Analysis of covariance was used to establish the differences between the six frequency groups.
Results: Highly statistically significant main effects of the frequency of performing number puzzles were seen on all 14 cognitive measures, with P values of less than 0.0004. Interestingly, participants who reported engaging in number puzzles more than once a day had superior cognitive performance on 10 core measures compared with all other frequency groups, although not all were statistically significant.
Conclusions: This study has identified a close relationship between frequency of number‐puzzle use and the quality of cognitive function in adults aged 50 to 93 years old. In order to determine the value of these findings as a potential intervention, further research should explore the type and difficulty of the number puzzles. These findings further contribute to the growing evidence that engaging in mentally stimulating activities could benefit the brain function of the ageing population.

Abstract 2
Objective: The identification of modifiable lifestyle factors to preserve cognitive function in older individuals becomes increasingly of importance. This study examines whether word puzzle use is related to cognitive function in older adults.
Methods: Cognitive data from 19 078 cognitively healthy individuals aged 50 to 93 years enrolled into the online PROTECT study were evaluated for self‐reported frequency of performing word puzzles on a six‐point scale, ranging from “more than once per day” to “never”. Nine cognitive tests covered a range of domains including focussed and sustained attention, information processing, executive function, working memory, and episodic memory. Analyses of covariance were used to determine any differences between the six response groups.
Results: Each of the 14 cognitive measures analysed showed highly statistically significant main effects of the frequency of performing word puzzles. For each measure, the group who never performed word puzzles performed most poorly, with the group who reported occasional puzzle use also performing more poorly than virtually every other group. Measures of speed provided the greatest discriminations, with a grammatical reasoning score differentiating the two highest frequency groups, performing word puzzles daily or more than once daily.
Conclusions: The frequency of word puzzle use is directly related to cognitive function in adults aged 50 and over. Future work needs to determine whether