E-cigarettes redux: A society in fear of mistakes 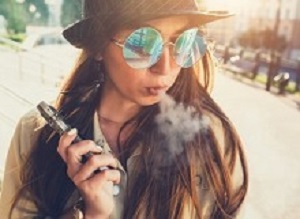 From the iconic imagery of film noir where cigarette smoke swirls about the night air to the ever-present now of kids being ‘bad’, there is no shortage of social and cultural interpretations of this latest chapter of a repeating phenomenon: adolescents pushing back against what is expected of them, writes Julian Vigo for Forbes. Young people will learn from their mistakes despite bills introduced in a dozen American states to restrict vaping among people under 21.

A few weeks ago, I wrote about the cultural anxiety directed at what youths are doing wrong in the context of smoking and vaping.

Since the publication of that article, there have been dozens of articles published about the dangers of vaping, particularly to teenagers, and lawmakers around the country have introduced measures to stop what is a growing trend in the under 21 age bracket.

And there have been bills introduced to limit or restrict vaping or its sales over the past month in Colorado, Tennessee, Minnesota, South Dakota, Washington, Kentucky, South Carolina, Maine, Florida, Arkansas, Connecticut and many more states.

From restricting where these products can be procured, imposing stricter age limits, and even making traditional no-smoking areas off-limit for vaping as they are for tobacco smokers, lawmakers are clearly worried about the impacts of vaping on public health, especially those under 21 years of age.

We are shown headlines where middle-school children “learn about the dangers of vaping” accompanied by a photo of these kids being handed packs of chewing gum. Yet, across the pond stories abound about how e-cigarettes are “less bad” than smoking in the UK while Irish politicians are pushing for more research into the possible “benefits and harms” of vaping.

This last approach strikes me as the rational and empirical answer to this subject given that only scientific research should inform decisions instead of the scare mongering that seems to be in full force elsewhere.

Senator Catherine Noone of Fine Gael welcomed the news and told the Irish Mirror that she hoped e-cigarettes would be incorporated within a national approach to tackling smoking rates in Ireland, a tactic which has been effective in other countries such as the UK where Public Health England (PHE) has gone on the record stating that vaping is 95% less harmful than smoking.

In fact, PHE has adopted e-cigarettes as a smoking cessation instrument and has seen smoking rates fall below 15% while other countries like Ireland have struggled to reduce the smoking rate significantly.

Reading the rush to create laws around vaping over the past few weeks, I was struck by how much of the legislative push is comes from the assumption that vaping is more harmful than other things that adolescents might do and how so much of the fear mongering has come from some very unsubstantiated claims.

For instance, many claim that vaping is the gateway to smoking, but PHE states in its report, “E-cigarettes: an evidence update” (2015) that there is “no evidence so far that e-cigarettes are acting as a route into smoking for children or non-smokers.”

And PHE says that even though e-cigarette use rose among young people in England through 2015, that these numbers have flattened off since, largely because of the UK’s regulations which strictly limit the nicotine level in e-cigarettes.

For example, nicotine in certain products, like Juul, is higher the US than it in the UK. In the UK there is no evidence to show that vaping leads to cigarette smoking and empirical evidence suggests that vaping is helping people leaving smoking.

In the US last year, however, there was a study which showed a negative correlation between vaping and cigarette habits, where between 2011 and 2015, vaping increased among US high schoolers from 1.5% to 16%.

Although the study is not definitive, the same researchers hold out hope that vaping might actually be effective in reducing smoking rates within this very same demographic.

But how to get through any possible benefits from vaping if there are false narratives disseminated by official organizations like the American Lung Association which state that vaping causes “popcorn lung”, a medical condition that damages the bronchioles, the lung's smallest airways? But the chemical, diacetyl, that the American Lung Association says is the cause of popcorn lung is also found in tobacco cigarettes at levels far higher.

In short, what studies are showing thus far is that there is great need for more research into the harms and benefits of vaping.

When revisiting the subject of our societal obsession of youth culture, I was struck by how the advertising of these products might very well part of the problem. And when I say “advertising”, I mean the lack thereof.

Recall the many critiques of Philip Morris’ Marlboro Men advertising campaigns which spoke to masculinity, the gentleman, and the debonaire elite of the mid-twentieth century to the hyper-macho cowboy images that many will remember from the 1980s. Cigarettes were marketed and sold on the basis of an image pertinent to a specific demographic and culture.

I recall in the late 1980s and early 1990s when the push against advertising tobacco products began in the US, that the demographic market was shifted towards large billboards in largely African American neighbourhoods in New York City and Cuban neighbourhoods of Miami.

Even today, the sale of cigarettes varies from country to country, but go to Canada and you will see grotesque images of diseased tissue on the packages of cigarettes or in Germany, there is what I like to call the “wall of sin” whereby in supermarkets, the cashier must push a button for the motorized wall to descend to reveal the various cigarette brands for the consumer who is checking out purchases.

In many countries, there has been a shift from a long term embrace and promotion of cigarettes towards a quasi-shaming of the subject who stands as the motorized mini-wall is lowered to reveal the choices of a presumed immanent death.

Skip to e-cigarettes and the marketing strategies are entirely different with the majority of advertising in North America taking place through YouTube and television adverts, print media and billboards.

But the messages are extremely different. First, there is no construction of the sexy or wealthy or powerful man as much tobacco advertising relied upon sixty years ago. The advertising reveals various themes: that vaping helps you quit smoking, that it is healthy (or healthier), there is a focus on the flavours and on technology, an emphasis on how vaping saves money and that it will make you happy.

These are extremely different messages than those attached to cigarette advertisement. Additionally, many companies have targeted children whereby scholarshipsare offered to the winner of an essay contest whose theme is the benefits of vaping or where companies like Juul sank over $1 million into the social media advertising market.

In fact, there are hundreds of vaping companies which sponsor cultural events in order to expand their market such as blu eCigs’ Vapor Lounge. And then there are companies like True Wholesale and Yocan Vaporizer which entice adolescents through a focus on marketing flavours and flashy vaporizer styles and colors. While Juul has been at the heart of media scrutiny on this subject, there is a far wider reach of dozens of e-cigarette companies which are able to sell online with little to no oversight.

Still, the heart of this situation is one of a society desperate to police what adolescents do to themselves despite no clear research which demonstrates that vaping is anything but a better option to cigarettes with comparatively minimal health risks. Secondary to this paradigm is the fact that that adolescents have forever been patrolled for the dangers they impose.

Here’s a walk down memory lane: remember the myth of poisoned Halloween candy or the urban myth that Mikey of the Life cereal TV commercial fame had died from eating Pop Rocks? Both were widely circulated urban myths whose function was to keep teens “safe” and even in control.

The only problem with these myths is that teens aren’t idiots and they would quickly discover that their parents had lied to them.

An adjacent path to this problem could be Psychology Today’s 2017 article which examines why teens have so much anxiety and depression. Among the usual culprits, overuse of technology and overemphasis on happiness, this article mentions other crucial and timely factors, namely: parents getting caught up in the dreams of their children’s future success such that these kids are not learning emotional or coping skills.

And what better way to abnegate children’s autonomy and ability to make mistakes than to contribute to a culture already obsessed with these teens’ next misstep.

American actor and acting coach, Stella Adler, once said: “You will only fail to learn if you do not learn from failing.” There is much wisdom to this quote in the context of adolescence.

As we witness a generation of youth who are being molly-coddled by parents fearful that their child will make a mistake or helicopter parenting techniques of never telling children “no,” this might just be an extension of that paradigm.

The youth of today have little to no room to make mistakes. To this I say, let youths today go out into the world aimlessly, rip their jeans, get a bad hair dye job, and even vape a lemon. As more states move to protect these individuals’ vulnerabilities, there is simply no way to grow up into adulthood without recognizing one’s own vulnerability and making – not one – but a series of mistakes.

For that is how we all got “here” at this very moment.

* Julian Vigo is a freelance journalist and writer.

[link url="https://www.forbes.com/sites/julianvigo/2019/02/08/youth-cultures-will-to-subversion-and-technologies-of-the-body/#13141c7f48a0"]Youth Culture's Will To Subversion and Technologies Of The Body[/link]