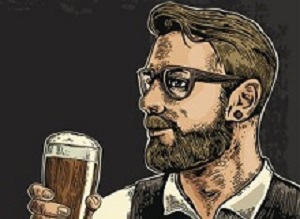 A study of more than 17,000 US adults shows that moderate alcohol consumption – seven to 13 drinks per week – substantially raises one's risk of high blood pressure, or hypertension, according to research being presented at the American College of Cardiology's 68th Annual Scientific Session.

The findings contrast with some previous studies that have associated moderate drinking with a lower risk of some forms of heart disease. Most previous studies, however, have not assessed high blood pressure among moderate drinkers. Since hypertension is a leading risk factor for heart attack and stroke, the new study calls into question the notion that moderate alcohol consumption benefits heart health.

"I think this will be a turning point for clinical practice, as well as for future research, education and public health policy regarding alcohol consumption," said Dr Amer Aladin, a cardiology fellow at Wake Forest Baptist Health and the study's lead author. "It's the first study showing that both heavy and moderate alcohol consumption can increase hypertension."

Alcohol's impact on blood pressure could stem from a variety of factors, according to researchers. Because alcohol increases appetite and is, itself, very energy-dense, drinking often leads to greater caloric intake overall. Alcohol's activities in the brain and liver could also contribute to spikes in blood pressure.

Data for the research came from the National Health and Nutrition Examination Study (NHANES), a large, decades-long study led by the US Centres for Disease Control and Prevention. Specifically, the researchers analysed data from 17,059 US adults who enrolled in the NHANES study between 1988 and 1994, the NHANES phase with data that is considered most complete and representative of the US population.

Participants reported their drinking behaviour on several questionnaires administered by mail and in person. Their blood pressure was recorded by trained personnel during visits in participants' homes and at a mobile examination centre.

In their analysis, researchers adjusted for age, sex, race, income and cardiovascular risk to separate the effects from alcohol consumption from other factors with known links to hypertension.

Aladin said the study's large sample size likely helps explain why the findings appear to contrast with previous studies in this area. Studies involving fewer participants or only one medical centre would not have the same statistical power as one using a large, national data set such as NHANES.

"This study is not only large but diverse in terms of race and gender," Aladin said. "The results are very informative for future research and practice. If you are drinking a moderate or large amount of alcohol, ask your provider to check your blood pressure at each visit and help you cut down your drinking and eventually quit."

Researchers didn't find any significant difference in blood pressure and alcohol intake by gender or ethnic/racial background. They plan to further analyse the data for insights on how demographic factors might influence the relationship between alcohol consumption and high blood pressure.

Abstract
Background: Epidemiological studies have established the association between excessive alcohol consumption and hypertension (HTN). However, there are conflicting reports of the association of mild to moderate alcohol consumption with HTN.
Methods: We studied 17059 participants (mean age = 46 yrs, 53% women) from the Third National Health and Nutrition Examination Survey (NHANES III). Alcohol consumption was ascertained via questionnaire. Blood pressure (BP) was measured during the in-home interview and a mobile examination center. We used multivariable logistic regression models adjusted for age, sex, race, income, and cardiovascular risk factors to examine cross-sectional associations of alcohol consumption and BP categories using the 2017 ACC/AHA High BP guidelines.
Results: Compared with never drinkers, moderate drinkers (7-13 drinks/week) had increased odds of prevalent Stage 1 and 2 HTN [Odds Ratio (OR) 95% CI: 1.53 (1.23-1.90) and 2.02 (1.52-2.69), respectively]. Among heavy drinkers (≥14 drinks/week) the odds of stage 1 or 2 HTN were also significantly elevated [OR (95% CI): 1.69 (1.36-2.11) and 2.41(1.83-3.16)] (Table).
Conclusion: This analysis from a large, nationally (US) representative population-based survey showed a significant association between moderate alcohol consumption and prevalence of hypertension. These data may help guide further research, public health education and policy initiatives focused on the health consequences of moderate alcohol consumption.