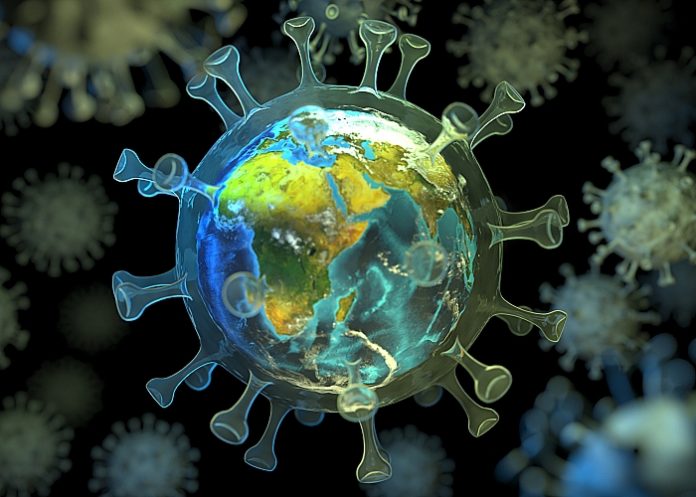 The findings of a study published in Science show that Africa cannot be left behind in responding to the COVID-19 pandemic, lest the continent become a source of new variants, writes Francis Kokutse for University World News. COVID-19 arrived in Africa mainly from Europe, but has since been spreading rapidly within the continent.

Genomic surveillance of the pandemic by public health officials and scientists has involved 112 African and 25 international organisations working in collaboration with the Africa Centres for Disease Control and Prevention (Africa CDC) and the World Health Organisation (WHO) to create a detailed analysis of SARS-CoV-2 variants and lineages in Africa.

The surveillance has shown that COVID-19 was introduced to the continent predominantly from Europe. The first cases were reported in Nigeria, Egypt and South Africa between mid-February and early March 2020, and most countries had reported cases by the end of March.

“These early cases were concentrated among airline travellers returning from regions of the world with high levels of community transmission,” according to the study.

“Many African countries introduced early public health and social measures, including international travel controls, quarantine for returning travellers and internal lockdown measures to limit the spread of the virus and give health services time to prepare.”
True number of cases much higher

When the pandemic – which was first detected in Wuhan in China – began to spread, Africa had relatively low numbers of reported cases and deaths. By the end of April 2021, there were 4.5 million cases and 120,000 deaths on the continent, less than 4% of the global burden.

“However, emerging data from seroprevalence surveys and autopsy studies in some African countries suggest that the true number of infections and deaths may be several-folds higher than reported,” the study said.

Out of a total of 10,326 genomes retrieved from the Global Initiative on Sharing All Influenza Data (GISAID) by the end of March 2021, some 8,746 passed quality control and met the minimum metadata requirements. These genomes from Africa were compared in a phylogenetic framework (to help with the detection of the evolutionary development) with 11,891 representative genomes from around the world.

One of the authors, Professor Tulio de Oliveira of Stellenbosch University’s School for Data Science and Computational Thinking, said: “We are deeply committed to using the most advanced technologies in Africa to trace and combat the virus.

“If the virus keeps evolving on the African continent, this will become a global problem. It is our moral duty to try to protect Africa and the world.”

De Oliveira, who is also director of the University of KwaZulu-Natal’s Research Innovation and Sequencing Platform, said this was a fulfilling collaboration.

“Not only did we manage to share and analyse our African data together, but the collaboration also involved complete sharing of knowledge, with all analysis scripts shared and hundreds of hours of capacity-building in analysis and data generation so that genomics can be decentralised and performed in real-time in Africa,” he said.

The study described the genomic epidemiology using the dataset of 8,746.
By 5 May 2021, a total of 14,504 SARS-CoV-2 genomes had been submitted to the GISAID database from the African countries and two overseas territories. Overall, this corresponds to approximately one sequence per 300 reported cases. Almost half of the sequences were from South Africa, where almost half the total number of cases in Africa have been reported.

The researchers performed phylogeographic analyses on the variant of concern (VOC) B.1.351, the variant of interest (VOI) B.1.525, and on two additional variants that emerged which they designated as VOIs for their analysis.

According to the authors of the article, VOCs in Africa have important implications for vaccine rollouts on the continent. “For one, slow rollout of vaccines in most African countries creates an environment in which the virus can replicate and evolve: this will almost certainly produce additional VOCs, any of which could derail the global fight against COVID-19.”

This phylogeographic analysis also suggested a changing pattern of viral diffusion into and within Africa over the course of 2020. In almost all instances, the earliest introductions of SARS-CoV-2 into individual African countries were from countries outside Africa.

The study said high rates of COVID-19 testing and consistent genomic surveillance in the south of the continent led to the early identification of VOCs such as B.1.351 and VOIs such as C.1.1.

Since these Southern African variants were discovered, several other SARS-CoV-2 VOIs have emerged in different parts of the world, including elsewhere on the African continent, such as B.1.525 in West Africa and A.23.1 in East Africa.

The researchers said there is strong evidence that both VOIs are rising in frequency in the regions where they have been detected, which suggests that they may possess higher fitness than other variants in these regions.

“Although more focused research on the biological properties of these VOIs is needed to confirm whether they should be considered VOCs, it would be prudent to assume the worst and focus on limiting their spread. It will be important to investigate how these different variants compete against one another if they occupy the same region,” the study found.

A focused phylogenetic analysis of the B.1.351 lineage revealed that, in the final months of 2020, this variant spread from South Africa into neighbouring countries, reaching as far north as the Democratic Republic of Congo (DRC) by February 2021.

“This spread may have been facilitated through rail and road networks that form major transport arteries linking South Africa’s ocean ports to commercial and industrial centres in Botswana, Zimbabwe, Zambia and the southern parts of the DRC.”

The rapid, apparently unimpeded spread of B.1.351 into these countries suggests that current land-border controls that are intended to curb the international spread of the virus are ineffective, according to the researchers.

The study noted that the rollout of vaccines across Africa has been painfully slow. However, there have been notable successes that suggest the situation is not hopeless.

“Rwanda, one of Africa’s most resource-constrained countries, had, within three weeks of obtaining its first vaccine doses in early March, managed to provide first doses to 2.5% of its population,” the study said.

“Strengthening genomic surveillance systems across the continent is key for early detection and control of disease outbreaks,” says Dr John Nkengasong, director of the Africa CDC.

“Since the beginning of the COVID-19 pandemic, the Africa CDC Institute of Pathogen Genomics has been supporting member states to expand their SARS-CoV-2 genomic surveillance for the rapid detection of variants.

“The institute is very proud of this collaborative work and will continue to coordinate collaboration among public health, academic and research institutions to strengthen pathogen genomics and bioinformatics capacity in Africa.”

* “New variants: Africa needs to strengthen its COVID response” was published by University World News on 14 September 2021. It is republished here under a Creative Commons Licence.

First published in Science on 9 September 2021.

The progression of the SARS-CoV-2 pandemic in Africa has so far been heterogeneous and the full impact is not yet well understood. Here, we describe the genomic epidemiology using a dataset of 8,746 genomes from 33 African countries and two overseas territories.

We show that the epidemics in most countries were initiated by importations predominantly from Europe, which diminished following the early introduction of international travel restrictions.

As the pandemic progressed, ongoing transmission in many countries and increasing mobility led to the emergence and spread within the continent of many variants of concern and interest, such as B.1.351, B.1.525, A.23.1 and C.1.1.

Although distorted by low sampling numbers and blind spots, the findings highlight that Africa must not be left behind in the global pandemic response, otherwise it could become a source for new variants.

Discovery: Data show 80% of South Africans may have had COVID-19