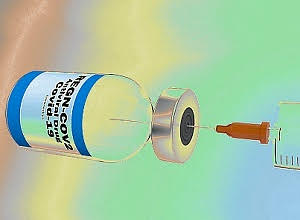 The world‘s largest trial of COVID-19 therapeutics has provided the first convincing evidence that a therapy that directly attacks the virus can save hospitalised patients from death, reports MedicalBrief. UK’s RECOVERY trial announced that a treatment produced by Regeneron reduced deaths by 20% among those who did not produce antibodies themselves.

“It is the first time that any viral treatment has been shown to save lives in hospitalised Covid-19 patients,” said Martin Landray, Recovery’s joint chief investigator.

A preprint will be available on medRxiv today (Thursday 17 June 2021).

The Regen-Cov treatment, a combination of antibodies casirivimab and imdevimab),did not lower mortality when all patients in the study were taken together,

“Here you have really the first direct SARS-CoV-2 drug,” says Eric Topol, director of the Scripps Research Translational Institute,” told Science. “Two drugs previously shown to be reduce COVID-19 mortality were developed for other diseases and work by dampening an overactive immune response, which is kind of an indirect strategy,” Topol said.

Regeneron's antibodies, which attach to the receptor-binding domain of the spike protein and prevent the virus from entering cells, are expensive and not widely available. Quickly identifying patients that benefit from it may be a challenge.

Researchers have developed several monoclonal antibodies against SARS-CoV-2, with mixed results. Some, including Regeneron’s, have shown some positive effects on disease progression in outpatients, but none were demonstrated to save the lives of severely ill patients in the hospital. The RECOVERY trial started evaluating Regeneron’s cocktail in mid-September.

By late May, 9,785 patients had been randomly allocated to receive either the usual care in the United Kingdom or the usual care plus a one-time infusion of the two antibodies, a procedure that takes roughly an hour.

About one third of the patients were seronegative when they entered the trial, meaning they did not produce antibodies themselves. That includes people with underlying health conditions that weaken their immune system, but also people who for unclear reasons are unable to produce antibodies early on. In this group, 30% of patients given standard care died, versus 24% of those who received the antibody cocktail. That translates to six lives saved for every 100 such patients treated with the drug.

The Regeneron cocktail received a lot of attention when US President Donald Trump received it during his bout with COVID-19 in October 2020. Although it's not clear whether Trump's immune system produced antibodies, the new results suggest the treatment may have helped save his life, says Topol: “Who knows what might have happened at his age, with his morbid obesity and all the other risk factors that he had.”

Although it received an emergency use authorisation from the US Food and Drug Administration in November 2020—and the US government bought 1.5 million doses— Regeneron's therapy has not been widely used.

Doctors will have to determine which patients fail to produce antibodies. “I think this isn't a complicated test to run, it just needs to be done,” says Landray.

The findings will provide a further boost for Regen-Cov, which is already well ahead of the competition in the corporate race to commercialise antiviral antibody treatments for Covid, commented the Financial Times.

On Tuesday (15 June 2021) one competitor, AstraZeneca, reported that its antibody cocktail failed to achieve its main target of preventing symptomatic disease among people exposed to the Sars-Cov-2 virus in a clinical trial conducted in the community, under quite different conditions to Recovery.

The Recovery trial enrolled almost 10,000 patients in hospitals across the UK.