Severe traumatic brain injury: Don’t be too hasty in pulling the plug 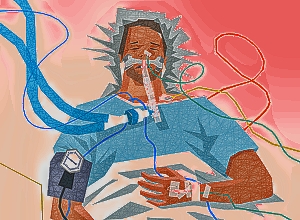 Recent research adds to a body of evidence indicating decisions about withdrawing life-sustaining treatment for patients with moderate-to-severe traumatic brain injury (TBI) should not be made in the early days after injury, since the long-term prognosis is often better than expected, concludes a study in JAMA Neurology.

Researchers led by University of California San Francisco, Medical College of Wisconsin and Spaulding Rehabilitation Hospital followed 484 patients with moderate-to-severe TBI. They found that among the patients in a vegetative state, one in four “regained orientation”, meaning they knew who they were, their location and the date, within 12 months of their injury.

"Withdrawal of life-sustaining treatment based on early prediction of poor outcome accounts for most deaths in patients hospitalised with severe TBI," said senior author Professor Geoffrey Manley, vice chair of neurological surgery at UCSF and chief of neurosurgery at Zuckerberg San Francisco General Hospital, noting that 64 of the 92 fatalities in the study occurred within two weeks of injury.

“TBI is a life-changing event that can produce significant, lasting disability, and there are cases when it is very clear early on that a patient will not recover,” he said. “But results from this study show a significant proportion of our participants experienced major improvements in life functioning, with many regaining independence between two weeks and 12 months after injury.”

The patients in the study were enrolled by the brain injury research initiative TRACK-TBI, of which Manley is the principal investigator. All patients were 17 and older and had presented to hospitals with level 1 trauma centres within 24 hours of injury. Their exams met criteria for either moderate TBI (approximately one third of patients) or severe TBI.

In both groups, the most common causes of injury were falls, assault and primarily car and motorcycle crashes in which the patient had been a driver/passenger, pedestrian or cyclist.

The patients, whose average ages were 35 in the severe TBI group (78% males) and 38 in the moderate TBI group (80% males), were assessed using the Glasgow Outcomes Scale Extended (GOSE), which ranges from one for death to eight for “upper good recovery” and resumption of normal life. The Disability Rating Scale (DRS) was also used to categorise impairment.

At two weeks, post-injury, 93% of the severe TBI group and 79% of the moderate TBI group had moderate-to-severe disability, according to the DRS, and 80% had GOSE scores from 2 to 3, meaning they required assistance in basic everyday functioning.

But by 12 months, half of the severe TBI group and three-quarters of the moderate TBI group had GOSE scores of at least 4, indicating they could function independently at home for at least eight hours per day.

Moreover, 19% of the severe TBI group had no disability, according to the DRS, and a further 14% had only mild injury, the researchers noted.

Most surprising were the findings for the 62 surviving patients who had been in a vegetative state, defined as a chronic state of brain dysfunction in which a person shows no signs of awareness. All patients had recovered consciousness by the 12-month mark and 14 out of the 56 with available data (1 in 4) had regained orientation. All but one survivor in this group recovered at least basic communication ability.

“These patients made the cut for favourable outcome,” said co-first author Joseph Giacino of Spaulding Rehabilitation Hospital, Massachusetts General Hospital and Harvard Medical School. "Their GOSE scores were 4 or higher, which meant they could be at home unsupervised for at least eight hours a day, since they were able to take care of basic needs, such as eating and toileting."

The study follows previous research that shows a significant percentage of patients with grave impairments achieve favourable functionality many months or years later. This research, led by Giacino, coincided with the recommendation in 2018 from the American Academy of Neurology that in the first 28 days after injury, clinicians should refrain from telling families that a patient's prognosis is beyond hope.

“While a substantial proportion of patients die or suffer lasting disability, our study adds to growing evidence that severe acute impairment does not portend uniformly poor long-term outcome,” said Manley, who is also affiliated with the UCSF Weill Institute for Neurosciences. “Even those patients in a vegetative state, an outcome viewed as dire, may improve, since this is a dynamic condition that evolves over the first year.”

Functional Outcomes Over the First Year After Moderate to Severe Traumatic Brain Injury in the Prospective, Longitudinal TRACK-TBI Study

Key points
Question How do functional outcomes change from the acute to chronic phases of recovery after moderate to severe TBI (msTBI)?
Findings In this cohort study of 484 participants with msTBI, by 12 months postinjury, approximately half of those with severe TBI and three-quarters of those with moderate TBI recovered the ability to function independently at home for at least 8 hours per day. Among participants in a vegetative state at 2 weeks, 77% recovered consciousness and 25% regained orientation by 12 months.
Meaning In this study, the presence of acute severe impairment did not universally portend poor functional outcomes after msTBI; clinicians should refrain from making early, definitive prognostic generalisations about the likelihood of poor functional outcomes following moderate and severe TBI.

Abstract
Importance Moderate to severe traumatic brain injury (msTBI) is a major cause of death and disability in the US and worldwide. Few studies have enabled prospective, longitudinal outcome data collection from the acute to chronic phases of recovery after msTBI.

Objective To prospectively assess outcomes in major areas of life function at 2 weeks and 3, 6, and 12 months after msTBI.

Design, Setting, and Participants This cohort study, as part of the Transforming Research and Clinical Knowledge in TBI (TRACK-TBI) study, was conducted at 18 level 1 trauma centers in the US from February 2014 to August 2018 and prospectively assessed longitudinal outcomes, with follow-up to 12 months postinjury. Participants were patients with msTBI (Glasgow Coma Scale scores 3-12) extracted from a larger group of patients with mild, moderate, or severe TBI who were enrolled in TRACK-TBI. Data analysis took place from October 2019 to April 2021.

Conclusions and Relevance In this study, patients with msTBI frequently demonstrated major functional gains, including recovery of independence, between 2 weeks and 12 months postinjury. Severe impairment in the short term did not portend poor outcomes in a substantial minority of patients with msTBI. When discussing prognosis during the first 2 weeks after injury, clinicians should be particularly cautious about making early, definitive prognostic statements suggesting poor outcomes and withdrawal of life-sustaining treatment in patients with msTBI.